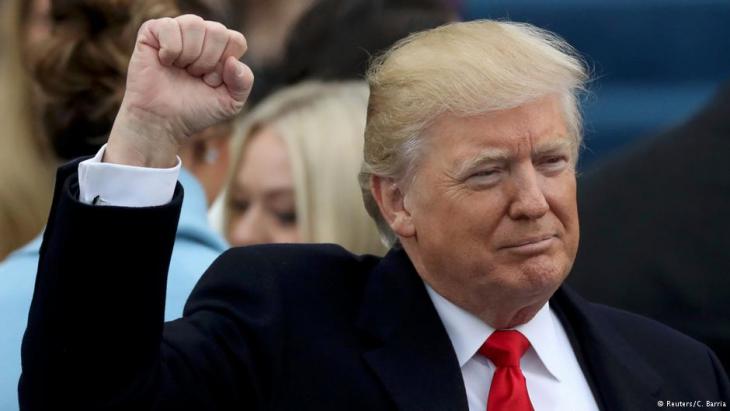 A recipe for further catastrophes?

Trump's election is also being seen as a caesura in the Middle East. Many fear a return to a simplistic way of thinking, which would make his presidency a nightmare for the region, says Loay Mudhoon

Eight years ago, Barack Obama reached out to the Islamic world and offered it a new partnership based on mutual respect. He wanted to usher in a new era in the relationship between the West and the Islamic countries – and above all, to draw a firm line under the aggressive militarism of the Bush era.

In his first television interview as president, a few days after taking office, he spoke to the Arabic broadcaster Al Arabiya of his desire to restore "...the same respect and partnership that America had with the Muslim world as recently as 20 or 30 years ago".

With the best will in the world, there is as yet no trace of this co-operative stance to be found in Donald Trump's administration. Quite the opposite: the Islamophobic statements he made during his campaign and the level of regard he has exhibited for dictators and ruthless authoritarian rulers like Vladimir Putin and Bashar al-Assad make expectations of a balanced Middle East policy extremely low.

At the very latest, his demagogical inauguration speech – which lacked any hint of classic American values like democracy, freedom and commitment to human rights – before the eyes of a global audience confirmed that we must expect a return to the simple patterns of thought (us against them) of the Bush era. 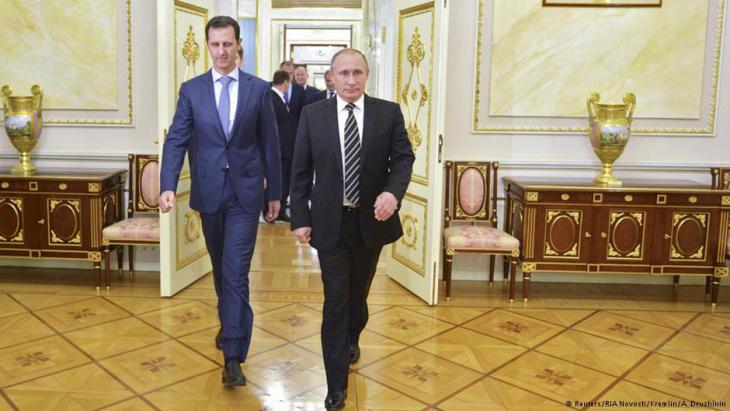 America's new allies? "The Islamophobic statements he made during his campaign and the level of regard he has exhibited for dictators and ruthless authoritarian rulers like Vladimir Putin and Bashar al-Assad make expectations of a balanced Middle East policy extremely low," writes Loay Mudhoon

While there can be no doubt that President Trump has inherited numerous complex conflicts in the Middle East from his predecessor – many of which are interconnected and overlap – what is known about his approach thus far illustrates an obvious lack of interest in and understanding of the dynamics of the Middle East conflicts. Above all, the one-dimensional, simplistic way Trump views the region's tremendous problems could prove to be a recipe for further catastrophes.

To give an example: when Trump announces that he wants to wipe IS terrorism from the face of the earth and for this reason declares that he is prepared to work with the mass-murderer Assad, he is quite simply confusing cause and effect. The jihadist would-be caliphate would probably never have become so powerful without Assad's tyranny and the barrel-bomb terrorism of his army.

Furthermore, Trump has declared that he wants to withdraw from the international nuclear agreement with Iran, because this is supposedly "the worst deal of all time" and is not going to prevent Iran from constructing nuclear weapons. But what alternative plan does his administration have at the ready to replace this multilateral treaty, which may have prevented a war? Besides which, the EU intends to stick to the agreement with Teheran and work with China and Russia in the process.

At the same time, Iran is supporting the Syrian despot Assad (who according to Trump, is "much tougher and much smarter" than top US politicians), pouring billions into the country and sending thousands of elite soldiers, who have ensured the survival of his regime for the past five years. Trump's perception of the Syrian conflict is not only self-contradictory, it is immensely dangerous. 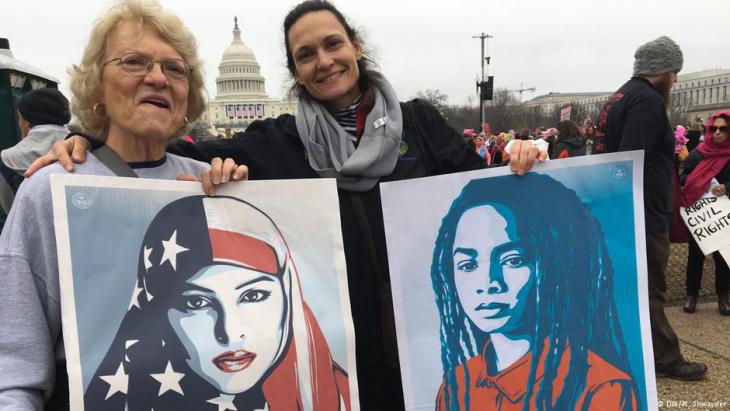 Marching for an open, tolerant America: in towns and cities across America and around the world, millions of people took to the streets to peacefully demonstrate against President Trump and for a more open, tolerant America. Pictured here: two women hold up placards at the women's march in Washington on 21 January

The appearance of stability

Of course it is much too early to identify precisely what the Trump administration's real priorities might be in the Middle East. The fact that he wants to defeat "Islamic State" (IS) using a policy of pragmatic alliance with authoritarian rulers is not really surprising.

By contrast, his willingness to work unconditionally with all the region's despots and villains is likely to be more problematic. Already, Arab observers fear that the promotion of democracy, human rights issues and the practice of good governance may be the first victims of his potential Middle East policy.

But his swing towards authoritarian regimes promises only the appearance of stability, since these rulers have neither adequate strategies for solving the region's huge problems, nor the necessary will to introduce reforms. At worst, US rehabilitation of the despots may even accelerate the self-destruction of the Arab world.

What the crisis-plagued countries of the Middle East need is a realistic development prospect. Above all, Iran and Saudi Arabia must stop utilising sectarian identities to play power politics. This is where European policy must come in.

If this utilisation of sectarian identities is not pushed into the background and if regional co-operation structures are not set up in order to put an end to the eternal Middle Eastern zero-sum situation, there can be no way out of the vicious circle of violence.

No other Western poet was arguably so well-versed in the Koran or so fascinated by Islam as Germany's national hero, Goethe. In a new publication that examines all Goethe's ... END_OF_DOCUMENT_TOKEN_TO_BE_REPLACED

A deluge of books, movies, series and cover stories: ever since the events of 9/11, the West has seemed almost manically preoccupied with Islam. Yet this has rarely led to deeper ... END_OF_DOCUMENT_TOKEN_TO_BE_REPLACED

Two decades after the attacks of 11 September 2001, the West faces the shattered debris of its failure – not only in Afghanistan, but also in Iraq, Syria, Libya and Yemen. What ... END_OF_DOCUMENT_TOKEN_TO_BE_REPLACED

Following the Taliban's power grab, members of the Hazara minority fear they will be targeted. Those who can, escape. Others have joined the armed opposition. But for many, there ... END_OF_DOCUMENT_TOKEN_TO_BE_REPLACED

One thing the regime in Tehran has in common with the Taliban is that they both dislike the USA. But apart from that, Tehran has a number of issues with its neighbour, writes ... END_OF_DOCUMENT_TOKEN_TO_BE_REPLACED

Although the United States clearly could have done a better job of managing its departure from Afghanistan, the tragedy playing out this month has been 20 years in the making. ... END_OF_DOCUMENT_TOKEN_TO_BE_REPLACED
Author:
Loay Mudhoon
Date:
Mail:
Send via mail

END_OF_DOCUMENT_TOKEN_TO_BE_REPLACED
Social media
and networks
Subscribe to our
newsletter