Instead, the Saudis are not only bleeding financially and politically, they are also facing mounting international criticism as a result of the war's effects: enormous Yemeni casualties, the hunger of millions of civilians, not to mention the spread of disease.

If this would-be "short campaign" has proved beyond Saudi capabilities, why might they consider that a fully-fledged regional war against Iran could ever be winnable? Such a war, even with the help of Israel, would lead to more protracted, costly and bloody confrontations for all involved.

The Americans, recognising Saudi military inadequacy even with all the imported weapons, are well aware of this. Yet in their own interest they refrain from being straight with their wealthy ally. Honest advice to the Saudis would be to seek a "grand political deal" with Iran. 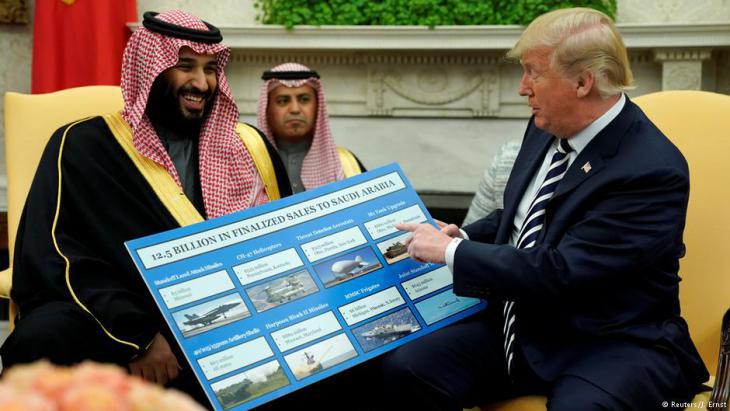 A cynically economic focus: in his televised meeting with the Saudi crown prince Mohamed bin Salman (MbS), Trump voiced the hope that in 2018-19 alone the value of arms deals with the Saudis would exceed $700 billion. Continuing to inflame Saudi fears towards Iran is the best guarantee of any current and future deals

Capitalising politically from the uncertainty

In their dishonesty, the Americans are exploiting the political impulsiveness of the young and inexperienced Saudi crown prince. MBS's public relations advisors, themselves mostly Americans, seem to have given him some "Politics 101" that look trivial when examined. One of the crown prince's fondly repeated lessons is the parallel between Western appeasement of Hitler on the eve of the Second World War and the West's non-confrontational approach towards Iran that culminated in the Obama-era nuclear deal.

This analogy is desperate to make the point that unless an actual confrontational line is adopted against Iran, the region will witness Iranian invasion and expansion into the Middle East. The reference is to the notorious Munich Agreement in September 1938, when British and French leaders in effect gave Hitler the right to continue invading Germany's neighbours.

Whether Nazi ambitions could have been stopped – and thus the course of events leading to war in 1939 halted – without that pact is an issue on which leading historians continue to differ. In any case, the comparison with today’s Iran is naive on many levels. The German grievances that lingered from the Versailles treaty in 1919, thereby fostering the rise of Hitler, are wholly absent with regard to Iran. The aggressive Nazi war strategy was led and popularised by its intent to restore the German lands that, after the empire's fall, had been seized and given to neighbouring countries.

The anti-Israeli Quds Day did not take place this year – a first both for Iran and Lebanon's Hezbollah. While Hezbollah leader Nasrallah sees his organisation in a state of siege ... END_OF_DOCUMENT_TOKEN_TO_BE_REPLACED

While "Daughters of Smoke and Fire" – Kurdish author Ava Homa's heart-rending debut novel – is about Leila, a young Kurdish woman, coming of age in contemporary Iran, the ... END_OF_DOCUMENT_TOKEN_TO_BE_REPLACED

Over ten years after the publication of "Censoring an Iranian Love Story", Shahriar Mandanipour's latest novel, "Moon Brow", is now available in German translation. This is a ... END_OF_DOCUMENT_TOKEN_TO_BE_REPLACED

Saudi Arabia has spent the past five years fighting off Iran-backed Shia rebels in a seemingly endless conflict that has cost more than 100,000 lives and left 80% of the ... END_OF_DOCUMENT_TOKEN_TO_BE_REPLACED

Saudi Arabia has called on Muslims across the world to put their hajj preparations on hold for the time being. The corona pandemic is impacting one of the central pillars of ... END_OF_DOCUMENT_TOKEN_TO_BE_REPLACED

According to the latest Reuters tally, more than 2.54 million people are now reported to have been infected by the novel coronavirus globally and 177,004 have died. As Muslims ... END_OF_DOCUMENT_TOKEN_TO_BE_REPLACED
Author:
Khaled Hroub
Date:
Mail:
Send via mail

END_OF_DOCUMENT_TOKEN_TO_BE_REPLACED
Social media
and networks
Subscribe to our
newsletter