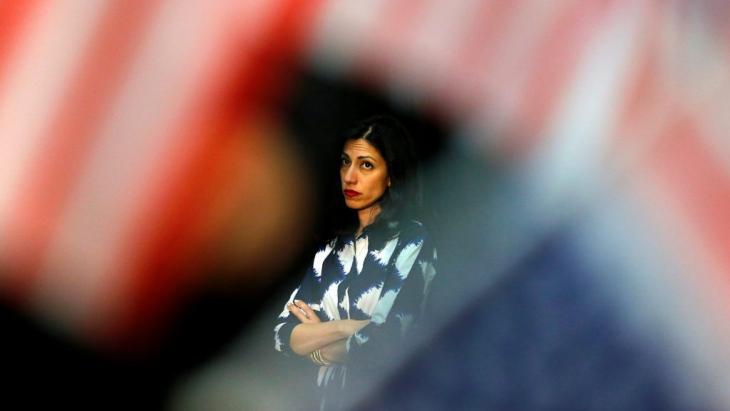 Huma Abedin – the woman in the shadows

Huma Abedin, long-time aide to Hillary Clinton, is someone who prefers to remain in the background. The current election campaign has seen her dragged reluctantly into the limelight however – and confronted her with sex scandals and terror threats. By Mey Dudin

She has been accused of being a "Saudi spy", a "mole for the Muslim Brotherhood" and of having "connections to terrorists" – and, as if that were not enough, wife of a "pervert". It is election time in the US and the opponents of Democratic presidential candidate Hillary Clinton have identified a target to attack: Huma Abedin, daughter of an Indian father and a Pakistani mother, is a Muslim who grew up in Saudi Arabia, is married to a Jewish politician and has been at Clinton's side for the past twenty years.

Not the most propitious of biographies for the times, it's fair to say. For months now, the petite 40-year-old, who prefers to stay out of the spotlight, has found herself in the midst of the merciless mud-slinging battle between Hillary Clinton and Donald Trump. The most recent scandal to engulf Huma Abedin broke in August, during a critical phase in the election campaign, when a newspaper revealed details of her husband Anthony Weiner's latest sexting activities and published the sexually suggestive picture of himself he allegedly sent to the other woman. The most unsavoury aspect of this selfie was the fact that Weiner and Abedin's young son was also in it – asleep in bed beside his father.

So who is Huma Abedin? Who is this woman whose name, until recently, hardly anyone knew and who, without wanting it, has attracted so much press attention? As a daughter of two worlds – the USA and Saudi Arabia – it's hardly surprising in this era of terrorism, with jihadists carrying out horrific attacks in Paris, Orlando, Nice and Brussels and apocalyptic terrorist militia intent, it seems, on tyrannising the entire world, that there should be some in the West who are mistrustful. She is actually quite an impressive character.

Born into an academic family in Kalamazoo, Michigan in 1976, she was just two years old when the family moved to the port of Jeddah in Saudi Arabia. Not much is known about her life in the devoutly Islamic Saudi kingdom, though it is unlikely to have been easy for the family. In an interview in Vogue magazine, Abedin recalled her mother's difficulty in adapting to the new life: "She'd look up at the sky from her new house in Saudi Arabia and every time an aeroplane passed, she'd say, 'I wish I could be on that.'''

Abedin attended international schools as a child and teenager. At 18, she returned to the United States, where she studied journalism in Washington D.C.  Her great ambition at the time was to be the new Christiane Amanpour. The two-world background of the British-Iranian journalist and TV presenter was something she could very much identify with. 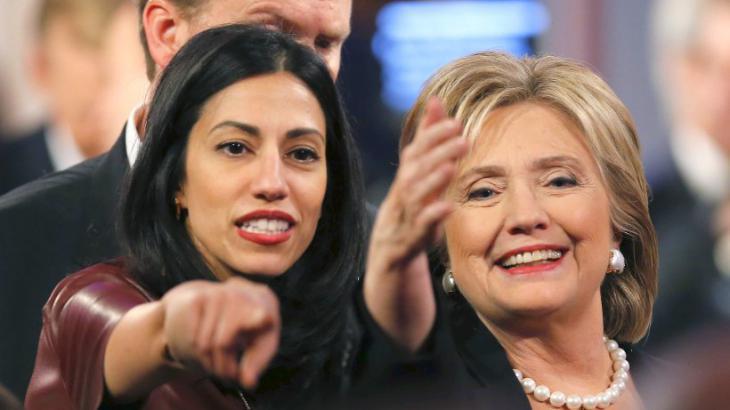 In the Republican firing line: Huma Abedin is one of the Democrat presidential nominee′s most trusted aides and advisors. Her proximity to Hillary Clinton has made her the subject of repeated attacks by right-wing GOP supporters. The name Abedin has also been linked to the Clinton email affair

In 1996, with the hope of a placement in the Press Department, she applied for an internship at the White House. The White House also has two worlds: the West Wing and the East Wing. Those in the West Wing work for the President, those in the East, for the First Lady. Huma's posting, as it turned out, was to the East – with Hillary Clinton – which disappointed her at first.

At the same time in the West Wing, another young woman was beginning her internship: her name, Monica Lewinsky. Two years later, when the relationship between Bill Clinton and Lewinsky was exposed, Huma Abedin was still working for the First Lady. By then she had become one of a team of trusted confidants, who now closed protective ranks around Hillary. The loyalty and discretion displayed by her reserved employee apparently did not go unnoticed at the top.

The ″engine at the centre of Clinton's well-run machine"

Huma Abedin gradually worked her way up through the ranks. Colleagues described her as a rather shy woman, someone who never smoked, drank, nor swore and was always polite. A friend of the Clintons who preferred to remain anonymous confided to Newsweek: "A lot of times, Hillary would snap her fingers and go, 'Gum.' And Huma would fetch it." Such devotion was to be rewarded, with Clinton promoting her to increasingly important positions in the Senate and the Foreign Office and finally, vice chair in the presidential campaign, or, as Vogue put it: "the engine at the centre of Clinton's well-run machine".

Huma Abedin still prefers to keep a low profile and on the rare occasions when she does break cover, it usually has something to do with who she is. For instance, when she took to Twitter to attack Trump's Islamophobia: "You can be a proud American, a proud Muslim and proudly serve this great country. Pride versus prejudice."

By choosing to emphasise her Muslim identity, however, she has put herself in the firing line. The USA is a country that tends to be concerned with its own affairs. World news is something the average citizen rarely gets to hear about and it's not unusual for knowledge of foreign policy to come from TV series. The country's politics are not so different from the way they are depicted in the hit TV series "Homeland" – where al-Qaida, Hezbollah, Iran and Palestinians are all treated as one and the same thing. 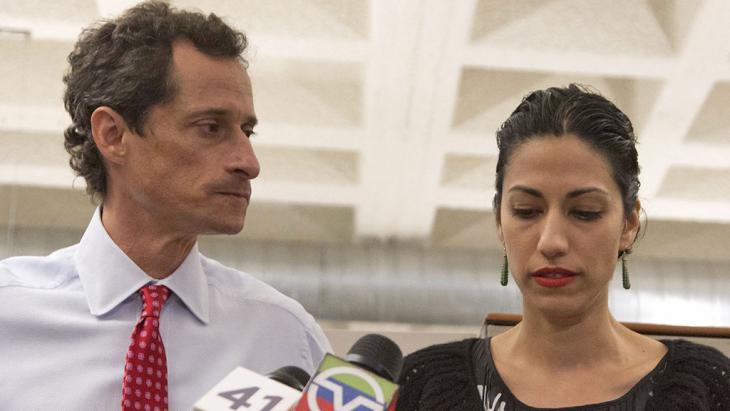 This goes some way to explaining why it is that those who are out to stop Clinton are also keen to highlight alleged links between the Abedin family and terrorism – and to try to make Huma Abedin guilty by association. Much speculation has surrounded the activities of her late father and her mother, who still lives in Saudi Arabia. After moving to Jeddah, her father, Syed Zainul Abedin, founded the Institute of Muslim Minority Affairs, an organisation devoted to the study of Muslim communities in non-Muslim countries. He also published its journal (Journal of Muslim Minority Affairs) which, after his death, was taken over by Huma Abedin's mother.

While Clinton's opponents have damned the journal as a "Sharia newspaper", others maintain that it is a scholarly and academic publication that gives a voice to both conservative and moderate Muslims. For a number of years, Huma Abedin's name appeared in the journal as an assistant editor. Meanwhile, another name mentioned there, has also raised suspicions about the Abedin family in the eyes of some Republicans.

Abdullah Omar Naseef, university professor and former General Secretary of the Islamic World League, is known to have had links to some dubious organisations, including supporters of both the mujahideen in Afghanistan and al-Qaida. He was also rumoured to have had connections with the Muslim Brotherhood. Very few people in America are aware that relations between the Muslim Brotherhood and Saudi Arabia have been strained for years, or that the Brotherhood was banned there as a terrorist organisation in 2014.

The conspiracy theories around Huma Abedin are not only an American phenomenon. In Egypt, where conspiracies are suspected around every corner, it is the press loyal to the country's regime that considers Clinton's aide a danger. And in the country generally, rumours of her family's links to the Muslim Brotherhood are all too readily believed. Columnist Amr Abdul Samir in the Al-Ahram newspaper, for instance, even went so far as to imply that Huma Abedin was behind a "devious plan" to convince Clinton of the Brotherhood's support of moderate Islam. Due to their "typical ignorance," he claimed, Americans would not understand that all Islamist terror groups had originated from the Muslim Brotherhood.

Whether or not Huma Abedin – who has already been touted as a possible future Secretary of State – can get her political career back on track after the most recent scandal surrounding her husband will only become clear after the election. In separating from Anthony Weiner, she has already taken the first step towards that goal.

Turkey's parliamentary and presidential elections are scheduled for June 2023. But they are already casting a shadow. While the opposition is calling for early elections, ... END_OF_DOCUMENT_TOKEN_TO_BE_REPLACED

In his book "Ground Zero: 9/11 und die Geburt der Gegenwart" (Ground Zero: 9/11 and the Birth of the Present) Islamic scholar Stefan Weidner analyses the consequences of the ... END_OF_DOCUMENT_TOKEN_TO_BE_REPLACED

The rollout of coronavirus vaccines in the Middle East and North Africa is already taking place on a massive scale, with the United Arab Emirates leading the way. Nevertheless, ... END_OF_DOCUMENT_TOKEN_TO_BE_REPLACED

The Prophet Muhammad never executed anyone for apostasy, nor encouraged his followers to do so. Nor is criminalising sacrilege based on Islam’s main sacred text, the Koran. In ... END_OF_DOCUMENT_TOKEN_TO_BE_REPLACED

Surging coronavirus cases in many parts of the world have overshadowed the start of this year's Muslim holy month of Ramadan, with festivities once again curtailed by contagion ... END_OF_DOCUMENT_TOKEN_TO_BE_REPLACED

As Qatar prepares to host the 2022 FIFA World Cup, the country has come under fire for its treatment of migrant workers, with some nations calling for a boycott of the contest. ... END_OF_DOCUMENT_TOKEN_TO_BE_REPLACED
Author:
Mey Dudin
Date:
Mail:
Send via mail

END_OF_DOCUMENT_TOKEN_TO_BE_REPLACED
Social media
and networks
Subscribe to our
newsletter