U.S.-Russian diplomatic tug-of-war
How will Syria's unending war play out in the northeast?

Facing the various divergent interests of external players such as Russia, the United States, not to mention Turkey and Iran, the future of northeast Syria remains anything but certain. By Stasa Salacanin

At the beginning of September, Russian Foreign Minister Sergey Lavrov visited Syria for the first time since 2012. Lavrov’s visit followed the agreement reached at the end of August between the Syrian Democratic Council (SDC) – the political wing of the Syrian Democratic Forces (SDF) composed primarily of Kurdish, Arab and Assyrian militias – and the Syrian People’s Will Party, which is widely perceived as a pro-Russian faction within the Syrian opposition.

The two parties reportedly agreed to commit to finding a just democratic solution to the Kurdish issue in Syria, and ensure constitutional recognition of their rights, as well as the national rights of Assyrians, Syriacs, and all Syrian communities.

Meanwhile, the U.S. administration has been working on reconciliation between political factions of Syrian Kurds for the past year by mediating between the Kurdish national unity parties, the largest of which is the PYD (Democratic Union Party), the political arm of the YPG militia, the main component of the SDF and the Kurdish National Council in Syria (KNC).

The main goal of these negotiations is the creation of Kurdish “autonomous authority” while establishing preconditions for a U.S. military presence in the country, especially in the Syrian oil-producing region, which is likely to play an important role in any post-war arrangements in the country. This initiative also has the backing of the Macron government in France. The Syrian regime, however, joined by Russia and Turkey, has opposed the U.S.-backed Kurdish negotiations, describing them as an attempt to divide the country. 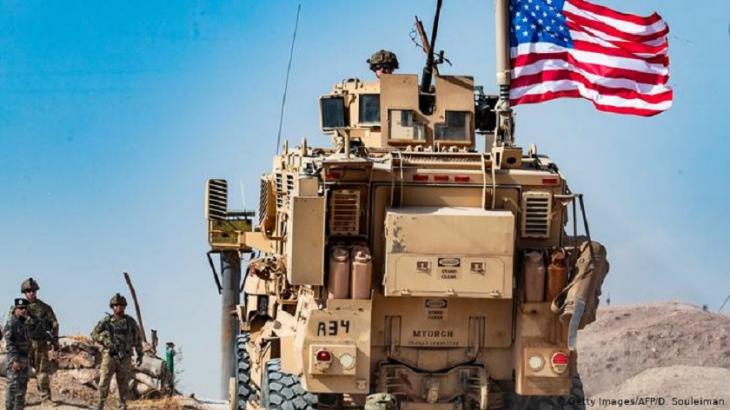 U.S withdrawal from Syria remains partial: some 500 American soldiers remain in the country, responsible – along with the SDF – for securing the American -backed “autonomous” zone and major oil fields. After several incidents with Russian forces deployed in the same area, U.S. Central Command announced in September 2020 that along with six Bradley fighting vehicles, the Pentagon will deploy Sentinel radar systems and increase "the frequency of U.S. fighter patrols over U.S. forces"

By maintaining its military presence in the country, the U.S. is trying to ensure the elimination of the last pockets of Islamic State, as well as the removal of Iranian forces from the country, while continuing to exert pressure on the Assad regime. The main reason for Washington’s engagement, however, is an attempt to deflect the influence of Moscow. During an online discussion panel hosted by the Hudson Institute, James Jeffrey, U.S. special envoy for Syria, stated that American deployment was needed to keep up the pressure on enemies of the United States. “My job is to make it a quagmire for the Russians,” Jeffrey said.

Although President Trump announced the withdrawal of American troops from Syria, some 500 soldiers remain in the country, responsible – along with the SDF – for securing the American -backed “autonomous” zone and major oil fields. After several incidents with Russian forces deployed in the same area, U.S. Central Command announced in September that along with six Bradley fighting vehicles, the Pentagon will deploy Sentinel radar systems and increase "the frequency of U.S. fighter patrols over U.S. forces."

Iranian author Fariba Vafi is adept at describing everyday scenes and concealing within them something ambiguous, in parts strange and grotesque. She writes novels – which have ... END_OF_DOCUMENT_TOKEN_TO_BE_REPLACED

In her latest exhibition in Japan, Farzaneh Khademian depicts figures who seem detached from their surroundings. In interview with Qantara.de, the Iranian photographer and painter ... END_OF_DOCUMENT_TOKEN_TO_BE_REPLACED

The catastrophic human rights situation in Bahrain is being largely ignored by the rest of the world. Despite all the damning evidence, which includes a Human Rights Watch report ... END_OF_DOCUMENT_TOKEN_TO_BE_REPLACED

Talks to salvage the 2015 Iranian nuclear deal have entered their eighth round in Vienna. Even if a deal is struck and some of the sanctions are lifted, the state of the Iranian ... END_OF_DOCUMENT_TOKEN_TO_BE_REPLACED

Every year in December, the team at Qantara.de takes a look back at the articles that proved most popular with our readers. This year is no different. Here is a run-down of the ... END_OF_DOCUMENT_TOKEN_TO_BE_REPLACED

END_OF_DOCUMENT_TOKEN_TO_BE_REPLACED
Social media
and networks
Subscribe to our
newsletter