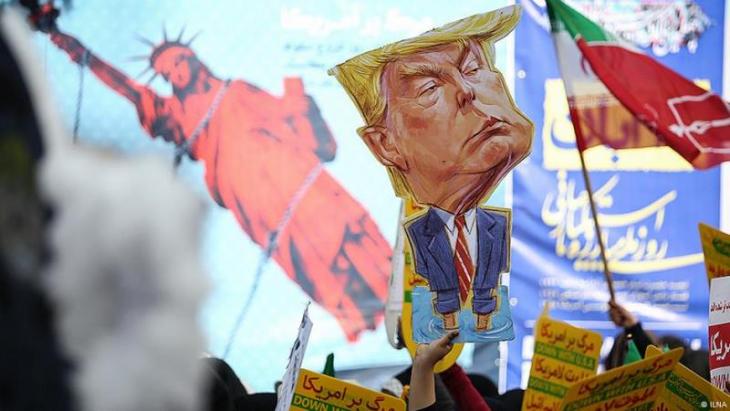 The lonely "axis of evil"

In the new Cold War between the USA and the Islamic Republic the theocracy is taking on the status of the defunct Soviet Union, writes Ali Sadrzadeh. Tehranʹs powerbrokers have, however, come up with several strategies to counter Trump's tightened sanctions policy

How can a state effectively organise the "black market"? A strange question, one might think: after all, isnʹt the state meant to combat smuggling and trafficking – not organise it.

But the objection is only correct in principle, because there are exceptions and special cases. A state that wants to fight illegal trade must itself be a reasonably normal state; moreover, the time in which it acts must also be normal, that is to say, a time of peace. And it is precisely these exceptions that lead us to Iran and its oil.

The Islamic Republic of Iran is not a normal state. In any case, it is not a republic in the traditional sense. And this particular state is currently on a war footing. Therefore, instead of fighting illegal trade, it sees itself forced to engage in it. Because in these strange times, the "Islamic Republic" is urgently looking for ways and methods to cheat the President of the United States, Donald Trump. And Iran believes it has found what it's looking for.

Trump announced a new round of sanctions against Iran on 4 November. "Strong sanctions", as Trump has been fond of repeating ever since he came to power. For example, he is looking to cut Iran's banking connections with the outside world, banning the sale of certain goods to Iran and making the purchase of Iranian oil a punishable offence for all but a handful of countries. But the rulers in Tehran have come up with a few ideas on how to continue supplying their most important export good to their customers.

In mid-October, Iranian Vice President Ishagh Jahangiri opened a stock exchange in Tehran that is the only one of its kind in the world. It is called an energy exchange. The state acts as a seller of oil: to be shipped on the Persian Gulf at a price that is up to five dollars cheaper per barrel than the daily price on the world market. Buyers remain anonymous, thus avoiding punishment by the USA. However, they do need to have small, agile tankers at their disposal. Ships are to carry a maximum load of 37,000 tons of oil and will sail the world's oceans without navigation, so that they cannot be located. Buyers are to pay 20 percent of the price in advance in Iranian currency, the rest following resale of the oil in U.S. dollars or euros. 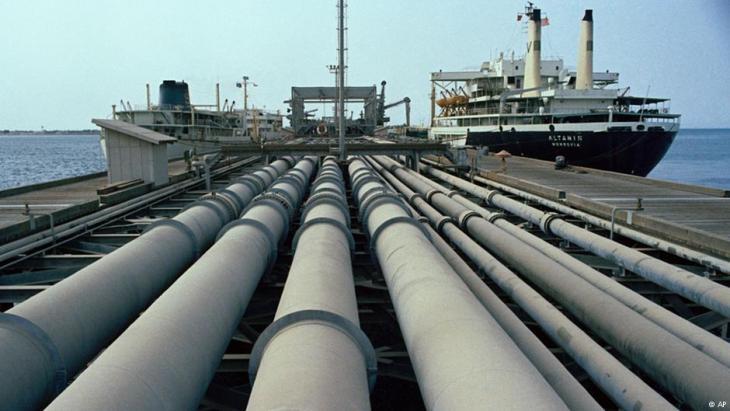 "Stealing a march on Donald Trump": in Tehran, ways are currently being explored to circumvent the new U.S. sanctions in the oil sector. The state acts as a seller on the stock exchange in Tehran and offers oil: to be shipped on the Persian Gulf at a price that is up to five dollars cheaper per barrel than the daily price on the world market. Buyers remain anonymous thus avoiding punishment by the USA. However, they do need small, agile tankers that cannot be located by radar

The Iranian government is promising absolute confidentiality: not only for the buyers themselves, but also their end customers. Where the oil tanker originated from and under what flag it is sailing will not be revealed. The government in Tehran thus believes it has found a way to sell at least one million barrels of oil a day.

It is an economic venture with many uncertainties. Whether the state will actually receive the full price for its oil through this illegal trade is uncertain. Moreover, all observers agree that this clandestine method of trading oil is likely to open the corruption floodgates.

The Islamic Republic has taken this fateful path once before already. It was 2008 and Mahmoud Ahmadinejad was Iran's incumbent president. He too had to leave the sale of oil to dubious intermediaries in order to circumvent international embargos. His confidants took over the lucrative oil business. The illegal trade in black gold flourished for eight years. The head of the National Bank fled to Canada with billions, another dazzling figure – once the driver of an important official – became a multimillionaire overnight and is currently standing trial. The latter is accused of embezzling billions of dollars from the sale of oil.

But despite or precisely because of the black market and the trafficking, Ahmadinejad achieved an unprecedented record. In the eight years of his presidency, he sold $800 billion worth of oil – more than anything Iran had achieved since oil was discovered there.

Trump's got it all figured out

But whether the wily "black marketeers" will be equally successful this time is doubtful. The Trump administration has after all taken precautions. In mid-August, U.S. Secretary of State Mike Pompeo appointed Brian Hook, an experienced policy advisor, as Special Representative for Iran. Hook was a close advisor to former Secretary of State Rex Tillerson, has worked with national security advisor John Bolton and is known for his firm stance against Iran. 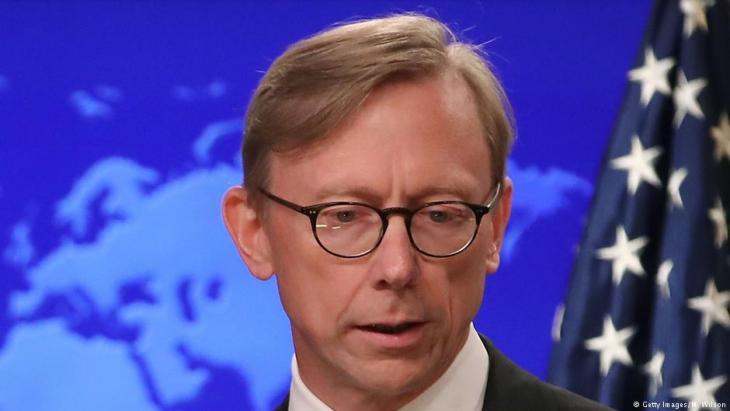 Brian Hook – gravedigger of the Islamic Republic? The U.S. State Department Special Envoy to Iran was a close advisor to former Secretary of State Rex Tillerson, worked with national security adviser John Bolton and is known for his firm stance against Iran. He is now leading an action group to stop the sale of Iranian oil

Now Hook is leading an action group charged with the strict monitoring of Iranian purchases and sales worldwide. The top priority is obviously to stop sales of Iranian oil, by whatever means. "Hook's Iran Action Group will co-ordinate the pressure on Iran; it will be responsible for steering, reviewing and co-ordinating all aspects of the Foreign Ministry's activities in Iran and will report directly to me," Pompeo said at the groupʹs launch.

Apparently we are experiencing a turning point in U.S. foreign policy towards Iran. At the beginning of October, the American State Department published a long text by Pompeo bearing the title "Confronting Iran: The Trump administration's strategy".

From the outset, it is clear the way things are heading. The opening sentence reads: "The end of the Cold War forced new thinking among policymakers and analysts about the greatest challenges to U.S. national security." This is followed by a long analysis of why the Islamic Republic poses a threat to the security of the United States of America and the entire world, followed by individual acts and misdeeds of the regime around the world. To conclude, the Secretary of State predicts the end of the Iranian regime.

A new Cold War against Iran

If one reads this text thoroughly, one inevitably comes to the conclusion that Iran is the Soviet Union of our time for the new U.S. government. And just as the western world once did everything in its power to defeat the Soviet Union, today the expectation is that the West – under the leadership of the USA – will work to achieve the downfall of the Iranian regime.

Yet those in power in Tehran have long understood what is at stake They know that their power is at stake and why Donald Trump chose 4 November of all days to announce his new sanctions list - the day of the occupation of the U.S. embassy in Tehran, when American diplomats were taken hostage, held for 444 days and shown blindfolded to the international press on an almost daily basis.

In the four decades since both sides have down their utmost to keep the machinery of mutual hatred going. Despite all sporadic attempts at rapprochement, the Islamic Republic continues to belong to the "axis of evil" for the USA. Once Iran had Saddam Hussein and North Korea's dictators for company. Now apparently the "pariah state" is on its own.

And the rulers in Iran are doing everything in their power to defend their countryʹs unique international status. At least when it comes to propaganda: the former U.S. embassy is now home to the Revolutionary Guard. And every year on 4 November, demonstrators burn U.S. flags in front of the building, renewing their hostility to the "great Satan" with hate slogans. 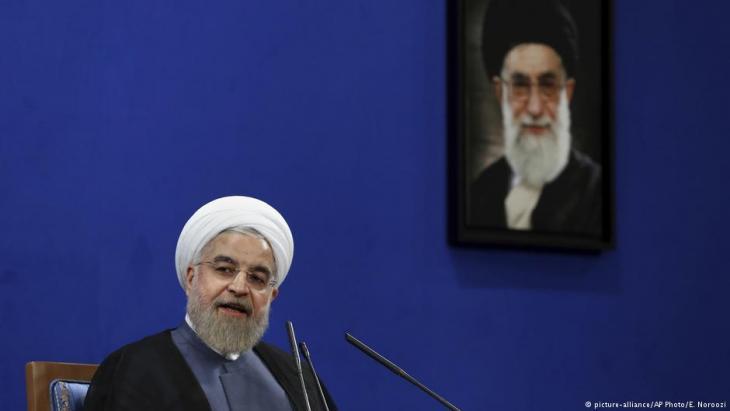 A new Cold War between Tehran and Washington: "We are facing an economic war and a tyrannical power," Iran's President Rouhani recently declared. Referring to U.S. President Donald Trump, he added: "I don't think anyone in the history of America has ever sat in the White House who is so opposed to laws and international conventions"

Coincidence or not: it was also a 4 November, on which Ayatollah Ruhollah Khomeini, the subsequent founder of the Islamic Republic, began his exile in 1964. According to the historiography of the powerful in Tehran, it was the Americans who instructed the Shah to banish Khomeini. Whatever the case may be, this day is now officially a "holy day", commemorated with state-organised marches up and down the country – and this year, understandably, all the more so.

"Mr. Trump will not be able to deconstruct or sour this holy day for us," Iranian President Hassan Rouhani told the "Cultural Council for the Islamic Revolution" last Tuesday. This powerful body, which has been organising official propaganda and state demonstrations since the victory of the revolution, has got a lot on its plate at the moment.

The Islamic Republic will soon turn forty and the plan is to celebrate in such huge style that everyone – friends and enemies alike – will be impressed. The celebrations should be so splendidly magnificent that no-one, not even Trump, will dare to mention the end of the Islamic Republic ever again.

Yet the "theocracy" is facing uncertain times. There are quite a few observers who think that the Islamic Republic will not survive Trump's term in office. By contrast Iranian websites loyal to the regime are currently publishing articles by American authors who claim that Trump will lose the upcoming mid-term elections as well as the next presidential election.

Once again there was not much to vote for in the Islamic Republic. Half of the candidates were excluded anyway. But for Khamenei, the election was part of a larger plan, namely ... END_OF_DOCUMENT_TOKEN_TO_BE_REPLACED

In the run-up to Iran’s parliamentary elections on 21 February, state media was at full blast. Urging Iranians to take to the polls, state TV’s Channel 1 ran an election-day ... END_OF_DOCUMENT_TOKEN_TO_BE_REPLACED

The 2015 Joint Comprehensive Plan of Action with Iran is in jeopardy. European governments should use the JCPOA’s dispute-resolution mechanism both to pursue immediate measures to ... END_OF_DOCUMENT_TOKEN_TO_BE_REPLACED

Mullahs, dictatorship, nuclear conflict – Iran could be reduced to these keywords if one were to rely only on the articles in the daily press. But to really understand a country ... END_OF_DOCUMENT_TOKEN_TO_BE_REPLACED

Many predominantly Muslim countries have penal laws against "blasphemy", "defamation of religion" and "apostasy". In practice they serve as highly effective weapons to settle ... END_OF_DOCUMENT_TOKEN_TO_BE_REPLACED

END_OF_DOCUMENT_TOKEN_TO_BE_REPLACED
Social media
and networks
Subscribe to our
newsletter