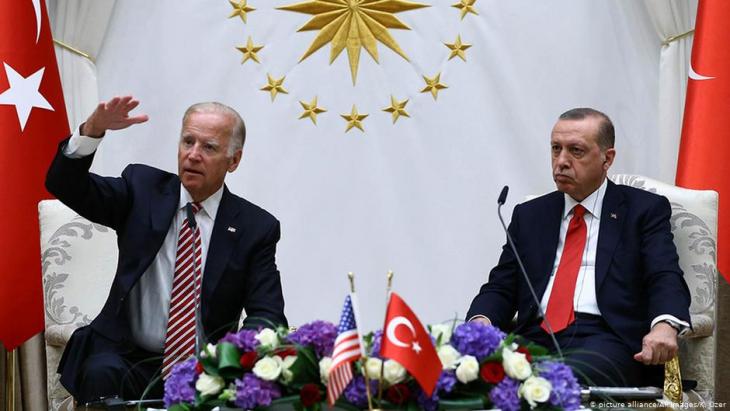 Initial statements by the Biden administration indicate it will follow a carrot and stick policy towards Turkey. Ankara believes its role in negotiations on various issues could strengthen its hand when it comes to ties with the new man in the White House. Ayse Karabat reports from Istanbul

The election victory of Joe Biden as the new president of the United States has prompted mixed reactions in Turkey: concern, hope, uncertainty, conspiracy theories, and curiosity as to what awaits the two NATO allies.

Joe Biden drew the ire of Ankara during his election campaign last year, when he said that Turkish President Recep Tayyip Erdogan was an autocrat and that Washington should embolden Turkish opposition leaders "to be able to take on and defeat Erdogan, not by a coup, but by the electoral process."

But regardless of the reaction, one thing is very clear for everyone watching Ankara-Washington relations closely: the nature of Turkish-U.S. ties, which had largely been reduced to the peculiar relations between U.S. President Donald Trump and Erdogan, is bound to be readjusted under the incoming Biden administration.

It would not be wrong to assume that there will be fewer direct phone calls between the two presidents and there will no back-door diplomacy between the sons-in-laws, either.

Berat Albayrak, the son-in-law of Erdogan who recently resigned as treasury and finance minister, and Jared Kushner, the son-in-law of Trump, both took an active role in overseeing bilateral relations between the two countries. They will no longer.

There was considerable speculation within Turkey that the resignation of Albayrak and the election of Biden, both of which happened in the same week, was not coincidental, but that Albayrak's resignation was part of Ankara's efforts to prepare for the Biden era.

Michael Carpenter, managing director of Penn Biden Center for Diplomacy & Global Engagement, was among the ones that raised the speculation, saying that Albayrak's stepping down may be "an indication that when the facts start to accumulate, there is a willingness to re-evaluate policies and personnel." He was speaking on 11 November during a livestream hosted by the Hellenic Foundation for European and Foreign Policy (ELIAMEP), a Greek non-profit research institute, where he said: "Let’s test this."

It seems Ankara is preparing itself for this test, not only by seeking out new lobbies to establish good connections with the new U.S. administration, but also by promising reforms to ensure the rule of law and a better economy. The Turkish economy has already been grappling with various problems, struggling especially since 2018 when Trump threatened Turkey with economic sanctions in a tweet over the imprisonment of American evangelical pastor Andrew Brunson, who was charged over terrorism links before eventually being allowed to walk free after two years in jail.

German Middle East analyst Guido Steinberg and television journalist Ulrich Tilgner have both published new books on the conflicts in the Middle East. Their analyses and their ... END_OF_DOCUMENT_TOKEN_TO_BE_REPLACED

On 27 March, Iran and China signed a 25-year accord intended to foster "strategic co-operation". Despite ongoing uncertainty over the deal's actual scope, content and chances of ... END_OF_DOCUMENT_TOKEN_TO_BE_REPLACED

In Grenoble, France, two professors have been pilloried in a dispute over the use – or otherwise – of the term Islamophobia. Is freedom of speech in jeopardy? By Stefan Dege and ... END_OF_DOCUMENT_TOKEN_TO_BE_REPLACED

Liberal Islam: everything revolves around the Koran. In the search for a liberal interpretation, peculiar constructs occasionally emerge. By Alexander Flores END_OF_DOCUMENT_TOKEN_TO_BE_REPLACED
Author:
Ayşe Karabat
Date:
Mail:
Send via mail

END_OF_DOCUMENT_TOKEN_TO_BE_REPLACED
Social media
and networks
Subscribe to our
newsletter