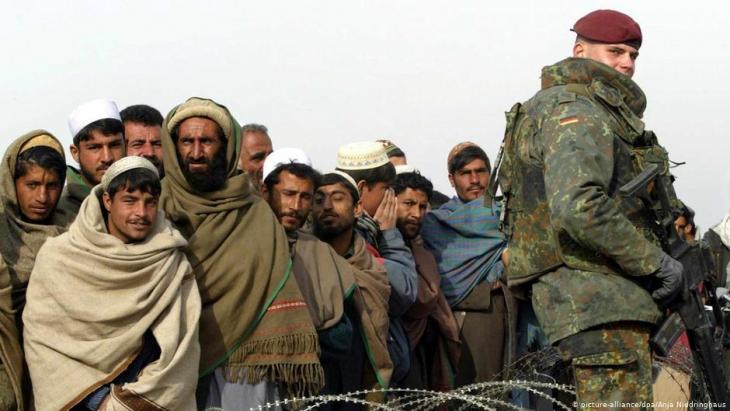 U.S. withdrawal from Afghanistan
Joe Biden and the West's betrayal of the Hindu Kush

The USA and NATO plan to withdraw from Afghanistan by September. The operation is risky, the outcome uncertain. Many Afghans fear civil war. The quake on the Hindu Kush will also impact Germany, writes Stefan Weidner in his commentary

Less than three months after taking office, U.S. President Joe Biden has announced the most dangerous manoeuvre of his term to date: by 11 September, twenty years to the day after the terrorist attacks on New York and Washington, he wants all U.S. troops to withdraw from Afghanistan. By commemorating 9/11, the withdrawal will be cast as the symbolic conclusion of an era of anti-terrorism, regime-change operations and nation-building. But it is also tantamount to an admission of failure.

In the aftermath of 9/11, none of the Bush administration's grandiose ambitions in the Middle East were ever realised. Today, Iran, Russia, Turkey, the Arab Gulf States and Israel hold sway in the region. Thus ends another chapter in the history of the "graveyard of empires", as the British referred to Afghanistan during the nineteenth century.

In 1989, the Soviets were forced to withdraw, demoralised, after ten years of war. One year later, the communist Eastern Bloc collapsed. The American Cold War strategy of arming militant Islam against communism had achieved its goal. But it also sowed the seeds that would eventually shake the USA itself to its foundations. Osama Bin Laden, mastermind of the attacks on 9/11, and his al-Qaida organisation were able to greatly expand their power in the course of the jihadist struggle against the Soviets in Afghanistan. After the Soviets were driven out, they took on the last remaining world power, the USA. 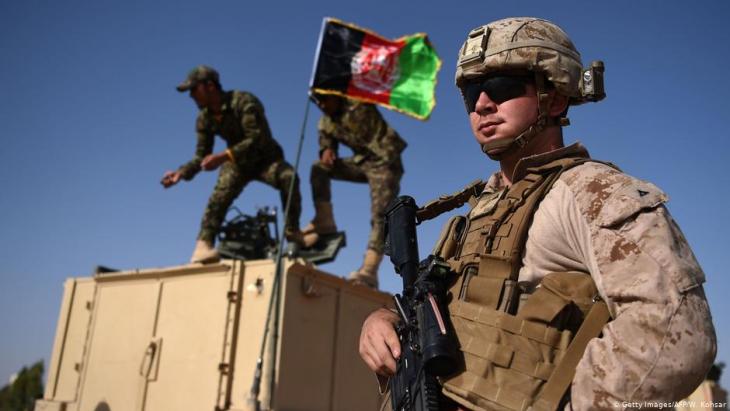 U.S. soldier deployed in Afghanistan: less than three months after taking office, U.S. President Joe Biden has announced the withdrawal of all U.S. troops from Afghanistan – by 11 September, twenty years to the day after the terrorist attacks on New York and Washington, he wants everyone out. It is "the most dangerous manoeuvre of his term to date," writes Stefan Weidner. "By commemorating 9/11, the withdrawal will be cast as the symbolic conclusion of an era of anti-terrorism, regime-change operations and nation-building. But it is also tantamount to an admission of failure." In the aftermath of 9/11, none of the Bush administration's grandiose ambitions in the Middle East were ever realised

A justified deployment, but then what?

The brutal terrorist attacks coordinated by Bin Laden from Afghanistan left the USA with no choice but to drive out the Taliban. They were sheltering Bin Laden and stubbornly refused to extradite him. The Taliban were finally defeated, but Bin Laden remained elusive. To prevent their return, Afghanistan was to be transformed into a functioning state with a progressive constitution and Western-oriented citizens, a showcase for so-called nation-building. Yet the failure of the project has been obvious to many observers for quite some time.

Biden's decision to withdraw from the country may therefore seem understandable at first. At twenty years, the military deployment there is the longest in U.S. history. That the USA is weary of this war became amply evident when Trump commenced peace negotiations with the Taliban. Biden has pointed out that the Americans have achieved their actual goal – that Afghanistan no longer serves as a base for attacks against the USA.

Taliban on the offensive

According to this logic, however, the USA should have withdrawn back in 2011 when Biden was Vice President and Bin Laden was tracked down and killed in Pakistan. There was a good reason why the Afghans were not left to their own devices at the time: the Taliban were already re-grouping. Obama increased the U.S. troop presence to 100,000. But the Taliban still managed to regain their grip on the country. Today they are the unofficial rulers of large parts of rural Afghanistan. Even in Kabul, no one is safe from them anymore.

The withdrawal is thus not only an admission of failure with regard to the grander and nobler plans for the country. It is also an act of political egotism on a par with that of Biden's predecessor, Donald Trump. It is a betrayal of large segments of the Afghan population, all of those people who put their faith in the promises made by the West and in its values and hoped to enjoy a modicum of freedom. They greatly fear the Taliban, expecting revenge and reprisals. 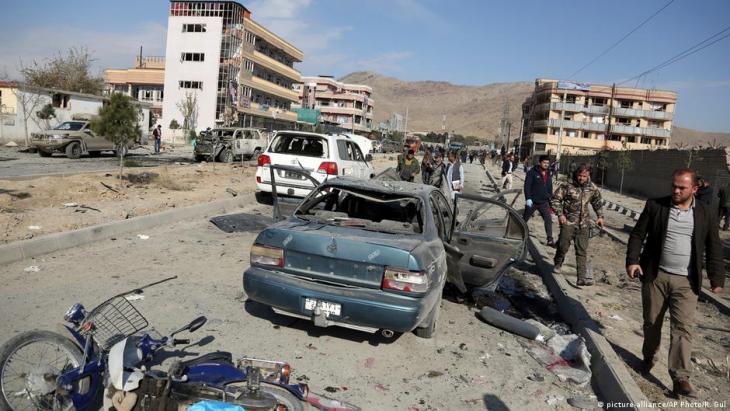 Car bomb attack in Kabul: fear of the future after the withdrawal of NATO and the USA is growing among Afghans. This particularly concerns those people who put their faith in the promises made by the West and in its values and hoped to enjoy a modicum of freedom. They greatly fear the Taliban, expecting revenge and reprisals, writes Stefan Weidner

And rightly so, according to journalists and official reports from Afghanistan. The many billions spent on aid for Afghanistan must now also be written off. Twenty years after 9/11, one of the most destructive groups contemporary Islam has produced can thus benefit from numerous solid infrastructure projects.

Fear of the future

But does this pessimistic assessment paint too bleak a picture? In theory, it seems right for countries to pull out of questionable foreign missions. If this is done without realistic prospects for what will happen afterwards, however, it amounts to shirking responsibility. The elected Afghan government will continue to be supported, Biden has said – if necessary, with Special Forces, long-range bombers and drones.

The Americans are counting on the notion that the Taliban have no interest in escalation, at least the more moderate among them. But there are others, and the Afghan offshoot of IS is already breathing down the Taliban's neck. We can only hope that Pakistan, where the Taliban once recruited members from among Afghan refugees, still has enough influence to keep them from openly storming Kabul. But Pakistan itself is also under pressure from strong Islamist forces. Only last week, supporters of a radical Islamist party paralysed traffic in Lahore and Karachi and engaged in street battles with police. Instead of keeping the Taliban in check, nuclear power Pakistan could become their next target.

The most likely outcome, however, is a new Afghan civil war. This would set off a humanitarian catastrophe resulting in waves of refugees felt in Europe as well. Many Afghans have already packed their suitcases. Those with the necessary means are leaving the country. Anyone who has cooperated with the West is now under threat. Will Germany be able to take in and rescue the many Afghans with whom the Bundeswehr has worked over the last two decades?

Defence Minister Annegret Kramp-Karrenbauer has recognised the problem and wants to allow them to enter the country.  But this permission must then also be granted to the jeopardised employees of the Deutsche Gesellschaft für Internationale Zusammenarbeit (GIZ) and other German NGOs. How this will actually work out in practice is still up in the air. Currently, Afghans who want to apply for a visa for Germany have to travel to Delhi to do so, a consequence of the attack on the German Embassy in 2017. Yet who can afford to make such a trip?

"Our security on the Hindu Kush"

After 11 September 2021, Americans will be able to sit back and relax. Their soldiers will be back home. The Taliban will not venture to attack the USA directly. And no Afghan refugee will make it across the Atlantic without a visa. The shock waves of the quake on the Hindu Kush will reach Afghanistan's fragile neighbouring states first: Iran, Pakistan and the states in the Caucasus.

Afterwards, the effects will be felt in the form of refugees fleeing to Turkey, the Balkans and Europe. Anyone who once believed Joe Biden would usher in a new era in U.S. foreign policy that would take Europe's interests into account stands to be disabused of this belief. "Our security is defended on the Hindu Kush as well,"  German Defence Minister Peter Struck said back in 2002. Were there ever a grain of truth in that saying, we can now expect uncertain times ahead.

Stefan Weidner is an author and Islamic scholar. His latest book, "Ground Zero. 9/11 und die Geburt der Gegenwart", was published in German by Hanser in January 2021.

Home
Print
Newsletter
More on this topic
Afghanistan’s academics under fire: Must young Afghans be willing to die for an education?Afghanistanʹs political future: Is peace with the Taliban possible?After the peace conference in Doha: A test match with the Taliban19 years on from 9/11: Has Germany failed in Afghanistan?
Related Topics
'Islamic State' | IS, 9/11, Al-Qaida, Barack Obama, Drones / drone warfare, European Union (EU), History of the Near and Middle East, Immigration, NATO, Opposition in Pakistan, Taliban, U.S. policy in the Middle East
All Topics

Since seizing power in mid-2021, the Taliban have continued to restrict the rights of Afghan women and girls. At the end of 2022, they banned women from attending higher education ... END_OF_DOCUMENT_TOKEN_TO_BE_REPLACED

Since returning to power in Afghanistan, the Taliban have steadily eroded the rights and opportunities of women and girls, particularly their access to education. But Afghans are ... END_OF_DOCUMENT_TOKEN_TO_BE_REPLACED

German imams have publicly expressed their solidarity with the women of Afghanistan. In a letter of protest, the clerics say that the Taliban regime's decree barring women from ... END_OF_DOCUMENT_TOKEN_TO_BE_REPLACED

At the end of every year, the team at Qantara.de gives you a run-down of the ten most-read articles on the site over the past 12 months. Here is a quick overview of the stories ... END_OF_DOCUMENT_TOKEN_TO_BE_REPLACED

The "Weiter Schreiben" (Keep Writing) project promotes literature from war-torn and crisis-stricken regions and has, most recently, shone its spotlight on Afghanistan. Afghan ... END_OF_DOCUMENT_TOKEN_TO_BE_REPLACED

The Islamic Republic has been unable to quell the civil unrest that erupted three months ago, after Mahsa Amini died after being detained for violating hijab rules. Now the ... END_OF_DOCUMENT_TOKEN_TO_BE_REPLACED
Author:
Stefan Weidner
Date:
Mail:
Send via mail

END_OF_DOCUMENT_TOKEN_TO_BE_REPLACED
Social media
and networks
Subscribe to our
newsletter