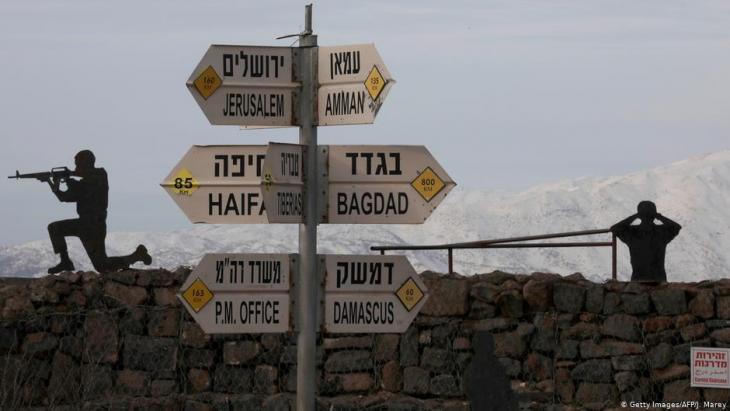 Why so silent over the Golan?

U.S. President Donald Trump has disregarded international law by recognising Israeli sovereignty over the Golan Heights. But why have reactions to the move thus far been so muted? By Karim El-Gawhary

As chaotic and turbulent as recent history has been in the Middle East, a few things have always been taken as read. One of these things was that the Israeli occupation of the Syrian Golan Heights in 1967 and their annexation in 1981 was never recognised internationally because it breaks binding UN resolutions and contravenes international law. But U.S. President Donald Trump cares little for such things, as illustrated by his recent official declaration that the United States recognises Israeli sovereignty over the Golan Heights.

Had any other U.S. President before him made such a declaration, the outcry – not only in the Arab world, but across the entire international community – would have been massive. The media would probably have reported on little else for weeks on end.

The political ruins of the Arab world

Today, however, it barely causes a ripple. As expected, the U.S. remained isolated at a meeting of the UN Security Council that followed the declaration. The 28 members of the EU also declared unanimously that its position had not changed and that the Europeans would not recognise Israeli sovereignty over the Golan. The condemnation voiced by the Arab League was a foregone conclusion. In other words, despite the fact that Washington has broken ranks with the rest of the world, the old positions regarding the annexation of the Golan Heights were confirmed worldwide and nothing more. That was it. Then it was back to business as usual.

But why is the reaction to Trump's frontal attack on something that everyone believed was an absolute cornerstone of Middle Eastern diplomacy so muted? On the one hand, it can undoubtedly be explained by the weakness of the Arab states. There will be no conflagration – so often apprehended in the region – because the Arab world is quite simply a desolate political wasteland at the moment. What's more, some Gulf states might even secretly prefer Israeli sovereignty over the Golan while the Syrian regime is in the Iranian sphere of influence.

Grist to the mill of radical forces 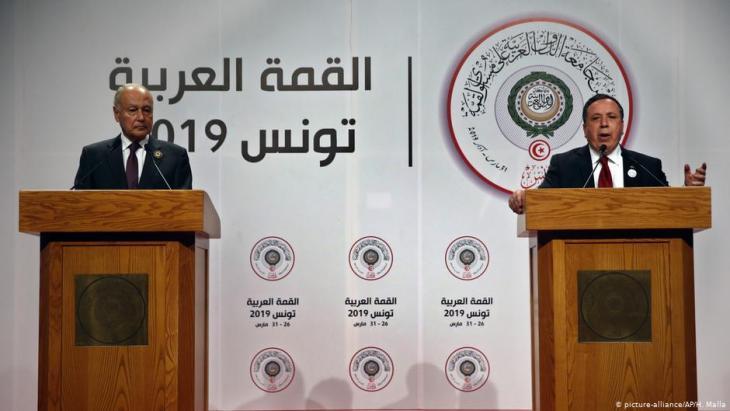 A gathering of toothless tigers: at the Arab League summit meeting in Tunis on Sunday, leaders from across the Middle East unanimously rejected U.S. recognition of the Golan Heights as Israeli territory. Yet their voices are unlikely to attract much attention

The contact in recent years between the security forces of Israel and several Gulf states on the one hand and Iran on the other is likely to continue unchanged. However, this act of unilateral recognition is likely to be grist to the mill of the radicals: Hezbollah leader Hassan Nasrallah's reaction was to be expected: only "resistance", he said, and not international organisations and international law, could restore the rights of the people. This is about the extent of the diplomatic condemnation that the U.S. President can expect from the Arab states.

The second reason Trump's declaration is not making bigger waves is less obvious, namely that the U.S. is taken less and less seriously in the Middle East. This development did not begin with Trump, but with George W. Bush's failed attempt to bring about a new regional order through the Iraq War. Another defining moment was the civil war in Syria, where Washington ultimately ceded the field to Moscow and Tehran. U.S. sway in the region continues to decrease, even though this withdrawal is not proceeding in a very orderly manner.

A divided Middle East in the Cold War

The role of the U.S. with regard to the Arab–Israeli conflict has also changed considerably in recent decades. When Israel occupied the Golan Heights and annexed them in 1981, the world was in the middle of a Cold War. The Middle East was divided down the middle.

The Soviet Union sided with the Arabs, and the U.S. with the Israelis. At the end of the Cold War, the only remaining world power was the USA, which from that point on attempted to position itself as an honest broker in the Middle East conflict, whether in the Oslo Peace Process between Israel and the Palestinians or in negotiations between Israel and Syria.

The USA never really played the mediator role successfully because America's bias towards Israel was virtually impossible to conceal. With Donald Trump as president, the world's greatest power has now bluntly and officially sided with Israel and the Netanyahu government. This was illustrated by the controversial moving of the U.S. embassy to Jerusalem, the closure of the Palestinian mission in Washington, the cutting of U.S. money for the United Nations Relief and Works Agency for Palestine Refugees in the Near East (UNRWA), and the recent declaration concerning the Golan.

Trump's ominous "Deal of the Century"

It could be argued that the muted reaction to the above-mentioned declaration is down not to the USA's weakness in the region, but the very opposite. As the head of the last remaining world power and as one half of the Trump-Netanyahu duo, Donald Trump is simply presenting the world with one irreversible fait accompli after another. And the lip service being paid to opposition to these moves is limited because it is going to happen whatever people say. However, if they are to be more than just symbolic, all these faits accomplis have to result in a significant whole. 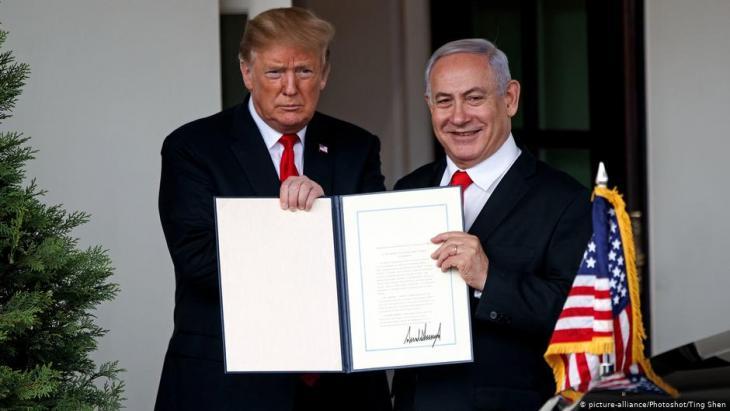 Cementing the Middle East deadlock: last Monday, U.S. President Donald Trump signed a decree recognising that the Golan Heights, annexed from Syria by Israel, belong to Israel. The ceremony took place during a visit to the White House by Israeli Prime Minister Benjamin Netanyahu. Israel occupied the Golan Heights in the Six-Day War and annexed them in 1981. A move that has never been recognised internationally

For years now, there has been talk that Trump's son-in-law Jared Kushner is preparing the mother of all solutions to the Middle East conflict. Trump himself has mysteriously termed it the "deal of the century". Little is known of its actual content. There is, however, a lot of speculation that property developer Kushner wants to buy off the Palestinians' rights and to shuffle around some items of politically explosive real estate. The intention is that the Gulf States will fund the plan.

If the little that the public is speculating about is indeed rooted in some kind of reality, virtually all Middle East experts agree that the "Deal of the Century" is likely to be nothing more than a damp squib. And this is why many in the region speak not of "waiting for Godot", but "waiting for Kushner".

During a hearing in front of a U.S. Congress committee last Wednesday, U.S. Secretary of State Mike Pompeo was asked when Kushner would at last unveil his long-awaited peace plan. He replied "I think we can say in less than 20 years." This was followed by nervous laughter and the words: "I prefer not to be more precise."

The truth is that if a solution is to be found to the Middle East conflict, an honest broker is needed on the international stage. The USA would now appear to have removed itself from the equation once and for all. The Europeans are too weak and are barely taken seriously in the region. And anyway, with whom would such a broker negotiate? With Israel's right-wing, which is completely and utterly convinced that it is in a position of strength to present the world with yet another fait accompli that will stand the test of time? Or with a conglomerate of Arab despots, who will not come up with a sustainable solution because they themselves are unsustainable?

At the suggestion of his Arab students, Israeli psychologist Ofer Grosbard created the project "Quranet", which uses texts from the Koran to solve educational problems in schools ... END_OF_DOCUMENT_TOKEN_TO_BE_REPLACED

Contemporary artist Mona Hatoum is one of those figures whose presence in western capitals stimulates much attention and critical writing, while her exhibitions in Arab cities ... END_OF_DOCUMENT_TOKEN_TO_BE_REPLACED

Wall, fences and checkpoints have become a way of life in the West Bank. But now innovative start-ups are using digital means to overcome borders and connect people across the ... END_OF_DOCUMENT_TOKEN_TO_BE_REPLACED

The collapse of traditional multilateralism in the Arab world has been accompanied by a significant shift in American Middle East policy under President Donald Trump, writes ... END_OF_DOCUMENT_TOKEN_TO_BE_REPLACED

In her latest novel, "The Book of Disappearance", Palestinian author Ibtisam Azem strikes a nerve with a fantastical tale that simultaneously fascinates and moves the reader, ... END_OF_DOCUMENT_TOKEN_TO_BE_REPLACED

In terms of policy, this election has little else to offer. Social issues, the economy and the conflict with the Palestinians are not dominant themes; it’s a question of power. By ... END_OF_DOCUMENT_TOKEN_TO_BE_REPLACED
Author:
Karim El-Gawhary
Date:
Mail:
Send via mail