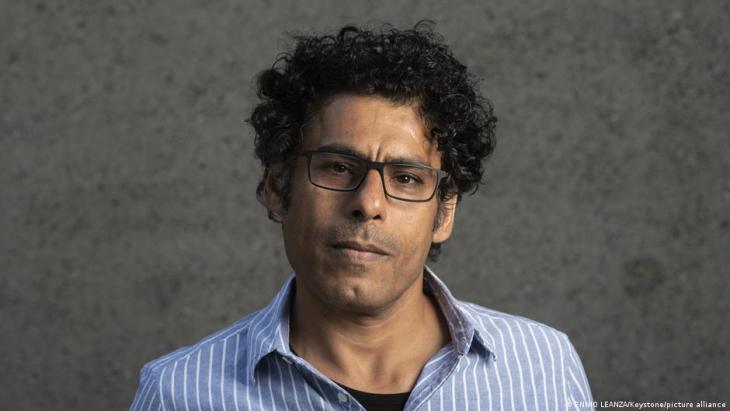 Aida works in the archives of the Arabic department in Basel city library. She loves reading Arabic-language books and writes in Arabic herself, so she appears to have found her dream job. She seems to be happy in her private life too and has been in a stable relationship for nine years.

But appearances can be deceptive: the young woman is weighed down by the lingering memory of events surrounding her escape to Basel. Her boyfriend increasingly pushes her onto the defensive with his persistent questions. He doesn’t understand that she can’t talk about it; sometimes his questions strike her ‘like an arrow… thin and sharp’. When the couple are obliged to spend a period apart for work, it finally paves a way for her out of the crisis.

At the beginning of the novel, Aida is still living with her parents and her sister in Switzerland. The family fled there from Iran, where they had never felt truly at home, becoming refugees in Switzerland, but her parents are not happy with their lives, lived along Western lines. Her father, a conservative theologian, is particularly displeased: not a day goes by that he doesn’t invoke the notion of a ‘homeland’, exalting their loss as the greatest problem in their lives.

A life in limbo

He struggles with his lack of knowledge of the German language, but, unlike his daughter, he has no desire to learn. He is only able to communicate on a basic level, something which sees his frustration grow by the day. This life offers few prospects for him and his wife, so the family return to Iraq after ten years, moving to ‘a village’ close to Abu Rajat. 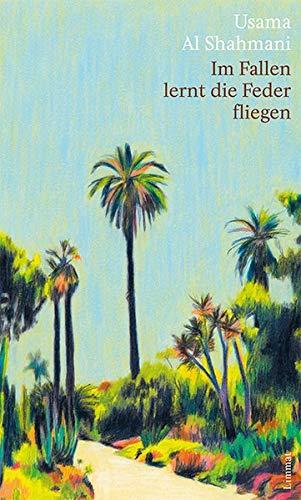 Poetry provides a way out: Aida finds a new homeland for herself; originating in her father’s figures of speech, yet liberated from its ideological pressures and his political naivety, she takes up the sound of this familiar language and conveys it into the poetic German that lends the novel its own hue

Shahmani relates this turbulent, complex tale of life as a refugee in measured tones that sometimes feels like the beat of a Swiss clock. Yet, whenever the refugees find themselves in danger, their lives headed for stormier waters, the pace picks up.

Aida, whose chronicles we are reading, often provides us with flashbacks, describing the two periods of her life in parallel. This gives the events an air of hovering between two points in time, underlining our protagonist’s inability to really ‘arrive’ anywhere.

Born in Iran, Aida struggles to really feel at home in Iraq. Her best times were spent as a schoolgirl in Switzerland, so it’s hardly a surprise when she and her sister plan to return there on their own initiative – a plan which the girls keep hidden from their parents.

Only one of their father’s old acquaintances, a family friend who lives in Switzerland, is privy to their plans. He enables the sisters to fly to Zurich via Istanbul and Vienna, but once they arrive at the refugee home, the young women are on their own. Tragically, Aida’s sister is killed in a car accident not long after.

More than anything, however, it is the little daily tests of endurance which make life hard, both abroad and once they have arrived in a now foreign-seeming homeland. For Aida’s parents, the German language was a key obstacle, the foreign words barring their way like ‘a row of tanks’, which they can never win round.

By contrast, Aida feels that her boss speaks ‘like a robot’, employing a ‘neutral language’ (meaning Swiss German) ‘without the slightest semblance of emotion’. In regaining and improving her Arabic, Aida has the opportunity to expand her own linguistic horizons and find a way out of her silence through poetry.

This is the exile in which Aida finds a new homeland for herself; originating in her father’s figures of speech, yet liberated from its ideological pressures and his political naivety (he believes that the imprisonment of Saddam Hussein has set a significant course for the country’s future), ahe takes up the sound of this familiar language and conveys it into the poetic German that lends the novel its own hue.

And so, the nature of Aida’s ‘return’ is two-fold, geographical and linguistic. She is desperate to ‘return’ to Switzerland (incurring some blame for the death of her sister in the process) because she has come to see the country as her (second) homeland, yet at the same time she has greater contact with her parents’ language, which she is obliged to re-learn, almost as a foreign language.

Much in the novel remains in the realm of hints and references; the characters have their specific roles and their development offers little in the way of narrative ‘added value’. One of the key motifs, Aida’s feelings of guilt surrounding her sister’s death, is almost discreetly skipped over; her psychological suffering only becomes clear when we learn that she has been attending weekly sessions at a psychiatric practice in Basel.

The dramatic events surrounding war and persecution contrast with the quiet flow of the narrative, in which it already counts as a climax to have Aida argue with her boyfriend about her parents' lives, or her mother tell her how she used to confide in a doll, as many women ‘in the old Iraqi cultures’ did ‘when they felt sad or oppressed in their marriages’.

Usama Al Shahmani has written a captivating novel about keeping quiet and about the power of memory, which can sometimes even overcome the loss of a homeland and the loss of one’s roots.

Usama Al Shahmani, born in Baghdad in 1971 and raised in Qalat Sukar (Nasiriya), studied Arabic language and modern Arabic literature. In 2002, he was forced to flee Iraq for Switzerland because of a critical play. Today he works as an author, translator and cultural mediator.

German Middle East analyst Guido Steinberg and television journalist Ulrich Tilgner have both published new books on the conflicts in the Middle East. Their analyses and their ... END_OF_DOCUMENT_TOKEN_TO_BE_REPLACED

The Pope’s journey to the "land between the rivers": places of terror and a dialogue to promote hope and optimism. His meeting with Shia Grand Ayatollah Ali al-Sistani was a ... END_OF_DOCUMENT_TOKEN_TO_BE_REPLACED

When Pope Francis sets foot in Iraq, he will be breaking historic ground while manoeuvring religious and political minefields. So will his foremost religious counterpart, Grand ... END_OF_DOCUMENT_TOKEN_TO_BE_REPLACED

Iraq's Christian minority has dealt with decades of persecution – and many are sceptical about whether a four-day visit by Pope Francis will make a difference. By Cathrin Schaer ... END_OF_DOCUMENT_TOKEN_TO_BE_REPLACED

For years the Arab intellectual elite looked to Lebanon, coveting its atmosphere of freedom. Feigning the non-existence of repression, Beirut welcomed intellectuals from across ... END_OF_DOCUMENT_TOKEN_TO_BE_REPLACED

On the 10th anniversary of the Arab Spring we can’t quite escape that substance called remembrance. Yet, eschewing facile modes of nostalgic remembrance and/or tragic lamentation ... END_OF_DOCUMENT_TOKEN_TO_BE_REPLACED
Author:
Volker Kaminski
Date:
Mail:
Send via mail

END_OF_DOCUMENT_TOKEN_TO_BE_REPLACED
Social media
and networks
Subscribe to our
newsletter