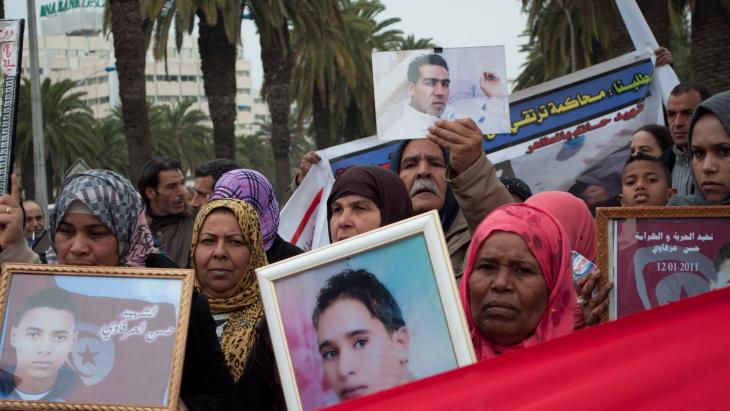 Victims of the Tunisian Revolution

The slow and painful search for the truth

Three years have passed since Tunisians took to the streets in protest against their ruler, Ben Ali. The country is now slowly moving towards democracy, but the victims of those early revolutionary days are still waiting for justice. Hopes that the truth will come to light and that relatives will discover who killed and injured their loved ones during the unrest are diminishing by the day. By Sarah Mersch

When the victims of the revolution and their families took to the streets on 14 January 2014, three years after the start of the rebellion in Tunisia, there was a sense of great anger. There have been repeated calls for something to be done to clear up unsolved cases of people who were murdered or maltreated during the uprising. So far, these calls have fallen on deaf ears.

Mohamed holds up a photograph of his son Belgacem, who was shot dead on 14 January in Sousse, around two hours' south of the capital, Tunis. "We'd spoken on the phone that morning; he reassured me and said he was going to work," says Mohamed. Then he didn't hear anything more from his son, who had left his hometown close to the Algerian border in search of work. His father counted the days, waiting for news amidst the political chaos. This eventually came, 26 days later. He was told he could come to fetch the body of his son. "That was three years ago, and we still don't know who killed him," says Mohamed, his voice choked with tears.

Three years after the flight of Ben Ali and the political upheaval in Tunisia, the search for the truth about what happened in the days of the revolt in the winter of 2010/2011 drags on. Cases are being investigated by various commissions; authorities, ministries and victims' groups argue over the number of people killed and injured; suspected perpetrators are tried in military courts – and all too often are treated far too leniently, say lawyers for the victims. 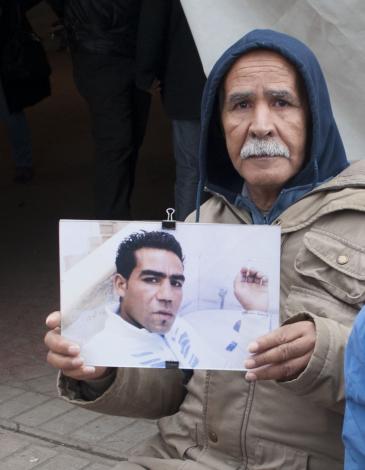 A cry for justice: Mohamed's son Belgacem was shot dead in the Tunisian city of Sousse on 14 January 2011; his killer has still not been brought to justice

Shortly before his resignation at the end of January 2014, former Prime Minister Ali Larayedh announced a series of measures – special payments, free health care, public sector jobs for the injured and relatives of the dead. But a reappraisal of the past has yet to take place.

Charfeddine Kellil defends many martyrs' families in court. He thinks the trials are unbalanced. "The Defence and Interior Ministries are dragging their feet over the cases. They have no interest in bringing the truth to light," he says. The lawyer is vehemently critical, saying there is no political will to have these cases solved.

"I have witnesses. I know who shot my son, but they don't want to know. They've been lying for three years," cries Mounira. Her son Mohamed was shot dead during unrest in Sidi Hassine, one of the poorest suburbs of Tunis. She blames the army for his death. Because members of the security forces are involved, the trials are taking place in military courts. "I've filed charges, but nothing's happening. The same people who killed him are now judging the cases. So it's obvious there's going to be no progress," she says. The Defence Ministry is not giving out any information about the trials.

Searching for the truth

Amna Guellali, head of the local branch of the NGO Human Rights Watch, keeps a close eye on the trials, most of which have gone to appeal. "In many cases, there were errors at the initial hearing and insufficient investigations," she says. However, at the present time at least, she is not willing to say that this is due to a political will to mask the truth.

"There are indeed questions, for example the whereabouts of the register which lists which weapons were deployed by which security unit," says Guellali. This would lead to conclusions being drawn over possible perpetrators. There are still many unanswered questions.

"Until we get to the truth, the families cannot grieve. Reconciliation isn't possible like this," she says. Guellali hopes that the transitional justice process will shed light on the matter. "Even though the measures for re-examining the past have been fragmented and uncoordinated over the last three years, it's never too late." Compensation payments are of secondary importance here, she says, the primary concern is finding out the truth.

At present, however, the Ministry for Human Rights and Transitional Justice is primarily concerned with supporting the victims materially and financially. Using a special fund sustained with the assets that used to belong to the former ruler Ben Ali, the government is trying to make life a little easier for 17 people who suffered serious injuries, explains Faouzi Sadkaoui, the special representative for victims of the revolution.

Justice for the victims 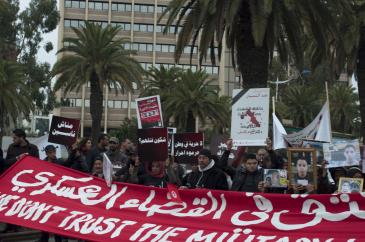 "Don't trust the military courts": since the Jasmine Revolution of 2011, which resulted in the overthrow of Zine El Abidine Ben Ali, many cases of people who were killed or maltreated during the uprising have still not be solved

"Most of the paraplegic patients and amputees are young people with their lives still in front of them. The most difficult thing for them is often getting up in the morning. When they open their eyes in the morning they are fearful of the day that awaits them. We must create conditions to enable them to lead dignified lives," he says.

But it is not at all clear who is entitled to claim this compensation. "Like all authorities, we're working with a list drawn up by the Interior Ministry in 2011: 3,727 wounded, 316 dead," says Sadkaoui. But several individuals are not on the list, and others are not victims at all. Now a commission is working through tens of thousands of applications. "From people who have been affected by tear gas, right through to people who have been badly injured, we have every kind of case to deal with," says Sadkaoui. "There are 15 of us in the commission, and it'll be a while before we've worked through them all."

A law on transitional justice was passed at the end of 2013. In the near future, Tunisia's constituent assembly is due to select members of the Truth and Dignity Commission, which will lead the process of investigating and analysing human rights abuses committed in recent decades in the coming years.

Faouzi Sadkaoui hopes that this will then bring justice for the victims of the revolution. "This is psychologically very important for the victims," he says. Also, files on cases tried under the military justice system since 2011 are to be reopened, he explains. Amna Guellali takes a critical view of this.

She feels that it is, of course, a good thing to re-run potentially flawed trials, "on the other hand, it contravenes basic precepts of justice, under which no one can be called to account for a crime for which he or she has already been sentenced," explains the legal expert, who used to work at the International Criminal Court.

Guellali fears that the legal process could become politicised. "It would be fatal if transitional justice were only used to settle old scores," she says. Victims' lawyer Charfeddine Kellil also has reservations about the law. "Transitional justice will be of little use to the victims of the revolution," he says. "They won't even be represented in the truth commission."

The Commission is expected to begin its work in April, with the aim of investigating and analysing human rights abuses that were committed not only during the upheaval of 2011, but also over the last 60 years.

At the suggestion of his Arab students, Israeli psychologist Ofer Grosbard created the project "Quranet", which uses texts from the Koran to solve educational problems in schools ... END_OF_DOCUMENT_TOKEN_TO_BE_REPLACED

Libyans have mixed feelings about the EU. On the one hand, they admire what Europeans have achieved, but on the other, they feel let down. Moutaz and Walid Ali report from Tripoli END_OF_DOCUMENT_TOKEN_TO_BE_REPLACED

The upheavals of the past year in the MENA region are arguably as momentous as those of the Arab Spring in 2011. Yet perhaps the biggest difference is that our interest seems to ... END_OF_DOCUMENT_TOKEN_TO_BE_REPLACED

Equality in divorce, a ban on polygamy: reformers of Islamic family law have a clear agenda. They are exploiting the ambiguity of traditional jurisprudence. By Joseph Croitoru END_OF_DOCUMENT_TOKEN_TO_BE_REPLACED

Hassan Aourid is one of the most important political and intellectual figures in Morocco. In interview with Ismail Azzam for Qantara, Aourid outlines his vision of the decline of ... END_OF_DOCUMENT_TOKEN_TO_BE_REPLACED

An interview with the Iranian-American historian and cultural philosopher Hamid Dabashi about writing, Europe's past and present, right-wing populism and the Arab uprisings. By ... END_OF_DOCUMENT_TOKEN_TO_BE_REPLACED
Author:
Sarah Mersch
Date:
Mail:
Send via mail