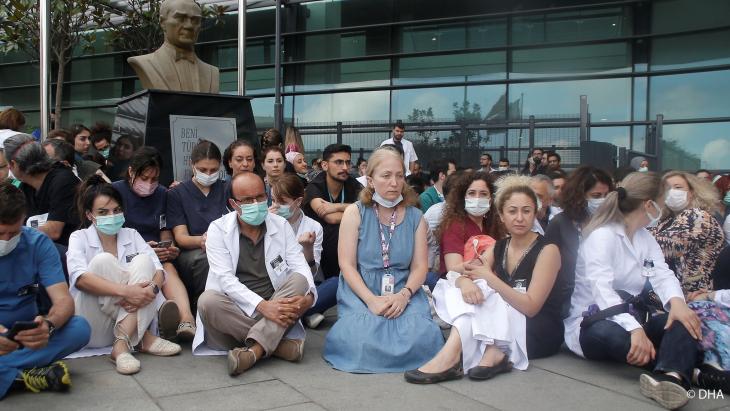 Violence against doctors and lawyers in Turkey
Exposed and at risk

Violence against doctors and lawyers in Turkey has been growing in recent years. But instead of taking action, the government is openly hostile towards two unions representing the interests of people working in these professions. By Ayşe Karabat in Istanbul

On 6 July, yet another doctor and a lawyer were murdered in Turkey, joining a grim tally of people who have lost their lives in violent attacks while at work. Both killings, which happened in separate incidents, led to reactions from the victims' respective professional organisations, both of which have been targeted for a long time by the Turkish government led by President Recep Erdoğan's Justice and Development Party (AK Party), and its electoral ally, the Nationalist Movement Party (MHP).

The murdered doctor was Ekrem Karakaya, a cardiology specialist in the Central Anatolian province of Konya. He was 49 years old and regularly worked 36 hours straight, like the majority of his colleagues in Turkey. He was shot by the son of one of his patients.

Karakaya became the twelfth doctor to be killed on duty in the last 20 years and since the AK Party came to power in 2002. The statistics paint a very grim picture of the situation for healthcare employees in Turkey. Every day in Turkey, there are an average 80 incidents of violence in the healthcare system, according to the Health Ministry, which established the white code system in 2016 to identify violence in the workplace. In 2020, there were 11,942 alerts of workplace violence; last year, that number rose to 29,826.

The Turkish Doctors' Union (TTB) says 84 per cent of its members have been subjected to verbal or psychical violence at least once in their professional lives. In a tweet, the union expressed its anger at the murder of Karakaya, called on Health Minister Fahrettin Koca to resign and called a two-day strike on 7–8 July.

Death of a lawyer

Around the same time, another professional union, the Istanbul Bar Association, made a separate call for a boycott on the same dates and urged colleagues not to participate in court hearings to protest at the murder of Servet Bakırtaş, a lawyer who was killed by an ex-convict demanding the withdrawal of a compensation case against him.

The president of the Union of the Turkish Bar Association (TBB), Erinç Sağkan, who had applied earlier this year to parliament on behalf of his organisation seeking the establishment of an inquiry committee to look into acts of violence against lawyers, said that there had been 19 cases of serious violence against lawyers in the first three months of this year, resulting in the death of three lawyers. He claimed this was a result of the backslide of the rule of law and working conditions for lawyers.

Parliament, where the majority of seats are held by the AKP and MHP, did not take action, neither after his application nor after a call made by main opposition Republican People's Party (CHP) leader Kemal Kılıçdaroğlu for an extraordinary session to enact a law on combating violence against doctors and lawyers.

"Instead of 'looking sad', if you're upset, let's take care of this right away. Let's enact the Bakırtaş-Karakaya Violence Prevention Law. Immediately," Kılıçdaroğlu said in a tweet on 7 July.

Government vitriol aimed at unions of lawyers and doctors

The government does not hide its animosity towards both the TTB and TBB, which are traditionally among the strongest civil society organisations in Turkey.

In February 2018, Erdoğan said both professional organisations should drop the word "Turkish" in their titles because they are not "local and national", a phrase in Turkish used to accuse someone or something of being a foreign agent. 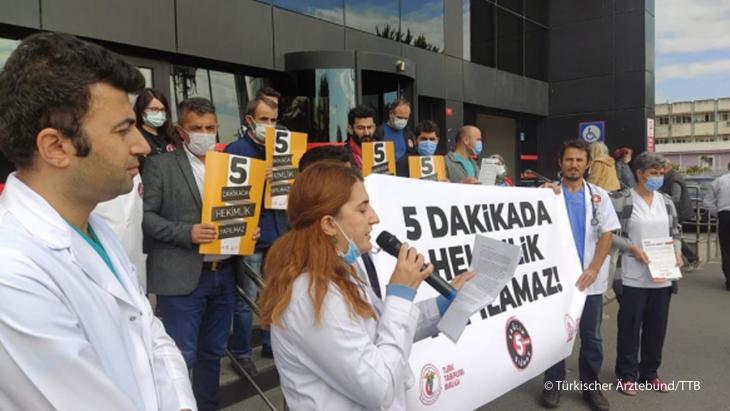 The central appointment system for the healthcare sector in Turkey allocates only five minutes to each patient for a consultation with a doctor. Pictured here: doctors protest that they have such a short time to devote to each patient. The text on the banner roughly translates as "5 minutes is not enough for medicine"

On one occasion, he went even further: in 2020, when the Ankara Bar Association criticised Ali Erbaş, the head of Turkey's Presidency of Religious Affairs (Diyanet), for saying homosexuality was the "cause of all illnesses", Erdoğan accused the bar of insulting Islam.

At that time, in May 2020, he said that "This example alone has shown the urgency and importance of regulation regarding the election methods of professional organisations, especially bar associations and medical chambers."

The government's verbal assaults were not limited to the union of lawyers alone; their vitriol was also extended to doctors too. At the beginning of the year, Erdoğan called the TTB "imposters" after it called out the Health Ministry for failing to share sufficient information on the domestically developed COVID-19 vaccine Turkovac and for not providing the scientific results of the phase 3 studies of the vaccine.

Erdoğan's ally MHP leader Devlet Bahçeli is no different when it comes to blasting these organisations. On several occasions, Bahçeli has said that the TTB should be shut down. When the TTB called for a two-day strike to protest at the killing of Dr Karakaya, Bahçeli told the doctors that "instead of being sad, the TTB is acting politically and arrogantly, asking the government to resign." On social media, trolls believed to be linked to the government launched the hashtag #CloseDownTTB. 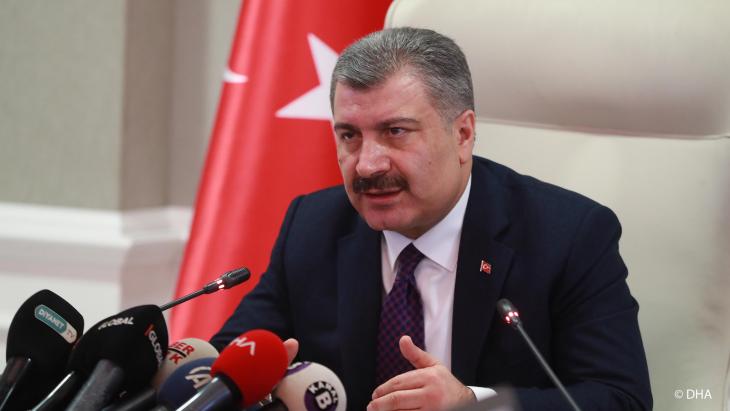 The Turkish Doctors' Union (TTB) expressed its anger at the murder of Ekrem Karakaya, a cardiology specialist in the Central Anatolian province of Konya, on 6 July and called on Health Minister Fahrettin Koca (pictured here) to resign

When doctors went on strike to protest at the killing of Dr Karakaya, an imam called Ali Gür lashed out at them. There is video footage of him giving a sermon during which he told the faithful at his mosque, "Yesterday none of the hospitals were on duty. Imagine if you went to the hospital, but the doctor turns you away because they are on strike. Would you not kill him, beat him, or swear at him?"

Immediately afterwards, the video went viral on social media, and an investigation was launched into Gür. However, the local branch of the Union of İmams, Diyanet-Sen, reacted to the investigation and said that instead of meddling in religious affairs, "something" should be done about the "unpatriotic" doctors.

Professor of psychiatry Prof Dr Selçuk Candansayar believes there are other reasons for the hostility towards doctors.

"The central appointment system gives only five minutes to each patient, and this system does not allow doctors to say, 'I want to devote more time to my patients'. So, they request many MR scans. There are more screening devices in Istanbul alone than in the whole of Britain," he told Qantara.

"Because they cannot make a diagnosis within five minutes, they prescribe several medicines and request MRI scans. So, the sellers of medicines and MRI devices are happy, and this leads people to say that doctors are greedy and are not doing their jobs properly, making them easy targets," he added.

The same is true for lawyers. They have come under fire and have been accused of being greedy and overcharging, especially when they win a case in court, said Prof. Dilek Dai Özcengiz, who is a medical doctor and a lawyer at the same time.

"The message to the ordinary uneducated people is that educated people used to look down on you, but now they are your servants and you are the masters," she told Qantara, adding that doctors and lawyers receive this message more than any other group of qualified professionals. "There is an ignorance being provoked, and this is working in favour of political interests, which is why there is violence everywhere," she said.

This year Annemarie Schimmel, the great German scholar of Islamic studies, would have turned 100. Unique within the German and international academic community of her time, ... END_OF_DOCUMENT_TOKEN_TO_BE_REPLACED

The Palestinian militant organisation Hamas, with Hezbollah's help, is building up a military presence in Lebanon, the ultimate consequences of which could be devastating, writes ... END_OF_DOCUMENT_TOKEN_TO_BE_REPLACED

More and more voices are being raised in Turkey that challenge previous versions of the country's history. These alternative accounts, still largely ignored by official quarters, ... END_OF_DOCUMENT_TOKEN_TO_BE_REPLACED

The Sufi Trail is a long-distance hiking route from Istanbul to Konya that seeks to revive the ancient tracks used by foot pilgrims on their way to Mecca. Marian Brehmer spoke to ... END_OF_DOCUMENT_TOKEN_TO_BE_REPLACED

Foresight is needed to turn the tide of German policy. Being independent of Russia must not lead to dependence on authoritarian regimes in the Middle East. By Kristin Helberg END_OF_DOCUMENT_TOKEN_TO_BE_REPLACED 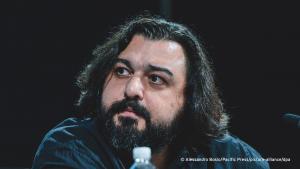 The ghosts of the army

END_OF_DOCUMENT_TOKEN_TO_BE_REPLACED
Social media
and networks
Subscribe to our
newsletter