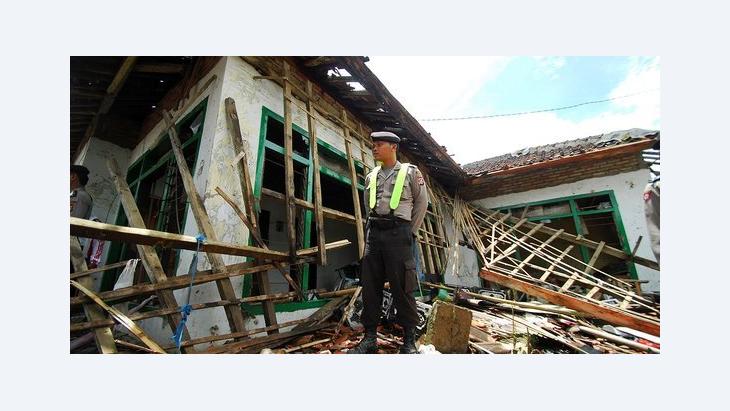 Violence against Minorities in Indonesia
Democracy without Tolerance

﻿The violence against minorities in Indonesia has reached new, terrible heights. While Islamist hardliners target Christians and supporters of the Islamic Ahmadiyya, the state turns a blind eye. Andy Budiman has the details

﻿At the end of May, Indonesia was the focus of attention at the meeting of the Universal Periodic Review working group of the UN Human Rights Council in Geneva. In particular, the focus was on the stabbing of a priest and the case of three members of a religious minority who were tortured to death, two incidents that call into question the value of democracy in Indonesia.

Indonesia's foreign minister, Marty Natalegawa, had to answer some very uncomfortable questions about the rising number of attacks on churches and minority groups in his country. Twelve years after Indonesians overthrew their dictator, the country is facing a new, much more complex form of authoritarian rule.

The democratic elections that have taken place since the toppling of Suharto are no guarantee of freedom in Indonesia, which has a majority Muslim population. The increase in conservatism and the emergence of radical Islamic groups are increasingly posing a threat to the country's minorities.

"Indonesia is no longer a tolerant country"

"I must admit that I no longer feel safe in Indonesia," says Rev. Albertus Patty, member of the board of the Communion of Churches in Indonesia (CCI), the largest Christian organisation in the country. "There are so many violent attacks during which neither the police nor the government step in," says Patty, adding, "Indonesia is no longer a tolerant country." 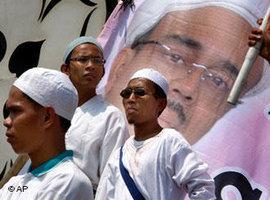 No tolerance for religious minorities: Islamist hardliners such as the Islamic Defenders Front, FPI, frequently protest – both peacefully and otherwise – against the Ahmadiyya

​​There have been more than one hundred terrorist attacks on churches since 2011. Last year, a bomb exploded in a church in the city of Surakarta in Central Java. Also, a priest in Bekasi, which is situated only 30 kilometres from the capital, Jakarta, was stabbed by a radical Islamic group.

In the same place, demonstrators threw human faeces and rotten eggs at a Christian community during church service in early May 2012. In the province of Aceh, where Sharia law applies, seven churches have had to be closed so far.

Christian communities are being prevented from holding church services by radical groups. "In recent times, it has become difficult for us to get a permit to build a church. And those for which we got permits and which were built have long been the target of terrorist attacks and have to close," says Rev. Patty.

In Indonesia, the construction of religious buildings is regulated by law. But Islamist hardliners are putting pressure on the government not to issue any new permits and even to have existing places of worship closed down on the grounds that they disturb their neighbours. The extremists claim that the majority population shares their resentment against Christians and other religious minorities.

For some time now, Islamic law – which is also referred to as "regional law" or even "regional Sharia law" – has been applied in some provinces. According to Rev. Patty, this means that Christians are discriminated against and degraded to second-class citizens.

Twelve years after the end of the Suharto dictatorship, Indonesia is under threat from religious fanatics. These religious zealots are exploiting the democratic climate in a targeted manner for campaigns that are a gross violation of basic democratic values.

Increasing support for radical Islamists: the atmosphere in Indonesian society is becoming increasingly conservative; tolerance towards smaller religious communities or those of different religious beliefs is decreasing

​​Radical Islamists, who frequently threaten minorities or perpetrate violent attacks against them, are gaining support, among other things because the general atmosphere among the people is becoming increasingly conservative. Recent opinion polls show that Indonesians are growing increasingly intolerant of people who live different lives. This applies not only to people who belong to another religious group, but also to religious movements within Islam itself, such as the Ahmadiyya.

Last year, a video known as the "Tragedy of Cikeusik" did the rounds on the Internet. It showed how supporters of the Ahmadiyya, an Islamic religious community, were abused and tortured in the most brutal manner by a huge crowd of people. Three members of the Ahmadiyya did not survive the bloodbath.

In 2005, the "Majelis Ulama Indonesia" (MUI), an organisation of conservative Islamic scholars, issued a fatwa, declaring the Ahmadiyya an "errant sect". Ever since, the community has been a target for Islamic hardliners. Speaking to Qantara.de, the spokesman for the Indonesian Ahmadiyya community, Mubarik Ahmad, said that members frequently face intimidation attempts and terrorism.

Only a short time after the MUI fatwa was issued, the headquarters of the Ahmadiyya group was attacked and destroyed by thousands of people. Yet the Indonesian government did not take any rigorous steps against the perpetrators, but decided instead to close the movement's headquarters. At least three governors and seven officials of about the same importance as a mayor reacted by simply banning the Ahmadiyya.

In West Sumatra, registry offices no longer accept marriage applications from members of the Ahmadiyya community. In West Java, they are even banned from undertaking the hajj, the pilgrimage to Mecca. On Lombok and in Banten, hundreds of Ahmadis have been living in emergency shelters since their houses were destroyed.

Mubarik says that the threat is greatest in smaller cities that are not the focus of media or human rights organisation attention. In such cities, many Ahmadi are forced to conceal their religious convictions. 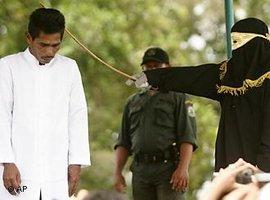 Creeping Islamicization: although Sharia law applies in some Indonesian provinces, it has to date only been fully implemented in the province of Aceh, where it mainly targets "immoral behaviour" such as betting, alcohol consumption, and prostitution

​​Mubarik is very concerned indeed because intolerance is not only being shown by unconciliatory groups, but also by state officials.

Suryadharma Ali is chairman of the Partai Persatuan Pembangunan (United Development Party, PPP), the Islamic party that is part of the governing coalition. One of his election promises in 2009 was to dissolve the Ahmadiyya sect. He has since been made religious affairs minister and repeatedly bans Ahmadi activities.

But as if that wasn't enough, it is also worrying that the Indonesian religious affairs minister has close ties to the chairman of the Front Pembela Islam (Islamic Defenders Front, FPI), Rizieq Shihab. In Indonesia, the FPI is known for its intolerant activities, which include, among others, attacks on churches. They too allege that the cultural events of the Ahmadiyya are not in line with Islamic teachings.

The end of tolerance

This is the face of Indonesia twelve years after the start of democratisation. So far, Indonesia has been praised by the world as being an example of how democracy can develop in a state with a majority Muslim population. But upon closer examination, Indonesian democracy is certainly not as unspotted as many around the world seem to think.

Intolerance and hate are dominant, not only in small, radical groups. Of course it is these small, radical groups that are discriminating most actively and most noticeably against other sections of the population. Above all, however, it is frightening that their views are gaining increasing support among the general public.

Indonesian democracy is developing in a strange direction: in favour of free political elections, but against the freedom to choose one's own religious beliefs.

With its traditions of neutrality and non-alignment, Indonesia has had to tiptoe around the Ukraine war debate. Pro-Russia sentiment in the region complicates Jakarta's foreign ... END_OF_DOCUMENT_TOKEN_TO_BE_REPLACED

Calls for an environmentally-conscious form of Islam are growing in Indonesia, as climate change poses enormous ecological challenges for the country. Experts say it could change ... END_OF_DOCUMENT_TOKEN_TO_BE_REPLACED

Indonesia has become a primary battleground between democratic and autocratic visions of Islam in the 21st century, with Nahdlatul Ulama pitted against Abdullah bin Bayyah, a ... END_OF_DOCUMENT_TOKEN_TO_BE_REPLACED

Research project "The Global Qur'an", brainchild of Professor of Islamic Studies Johanna Pink and sponsored by the European Research Council, analyses the history and ... END_OF_DOCUMENT_TOKEN_TO_BE_REPLACED

At a time when even some rich democracies are electing con men as their political leaders, the success of Indonesian President Joko Widodo deserves wider acclaim and appreciation ... END_OF_DOCUMENT_TOKEN_TO_BE_REPLACED

Comments for this article: Democracy without Tolerance

All human beings deserve the right to choose their own path in life free of choice, whether they be Jew, Christian, Muslim, Ahmadi, Baha'i, Hindu, Buddhist, Atheist, non-religious spiritual or anything else in life. All are human beings and worthy of respect.

END_OF_DOCUMENT_TOKEN_TO_BE_REPLACED
Social media
and networks
Subscribe to our
newsletter