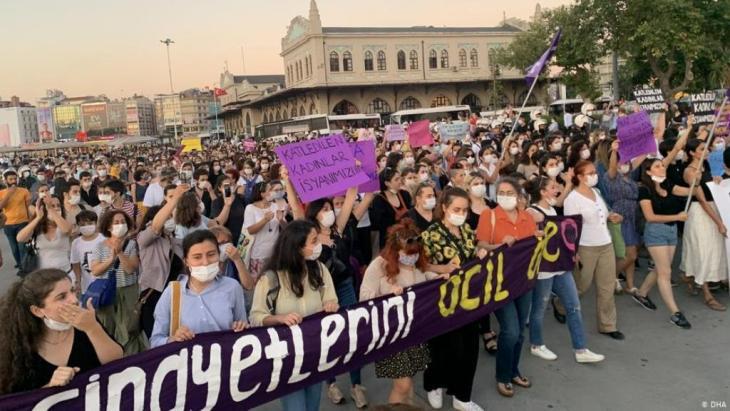 Violence against women
Femicide on the rise in Turkey

The recent murder of Turkish student Pinar Gültekin by her ex-boyfriend has sparked outrage in Turkey. Women's rights activists are calling for the government to tackle the widespread problem of femicide in the country, but their calls are being met with silence from the government and in some cases even tear gas and rubber bullets by police. By Daniel Bellut

Violence against women is not uncommon in Turkey. The recent killing of 27-year-old student Pinar Gültekin at the hands of her former boyfriend, however, sent shock waves through the country. The woman from Turkey's south-western Mugla province was beaten and strangled to death by the man. He then tried burning the corpse in a nearby forest. After failing to do so, he disposed of her corpse in a bin, which he then filled with concrete.

Several days after the murder, the man was apprehended thanks to CCTV footage captured at a gas station where he was loading a fuel canister into his vehicle. The police say the man acted out of jealousy.

According to the We Will Stop Femicide online platform, this year alone, 27 women were murdered for similar motives; a further 23 suspected femicides were recorded as well.

Women in Turkey's cities, particularly in the country's west, have taken to the streets to express their anger at the state of affairs. At a recent protest march in the coastal metropolis of Izmir, however, Turkish police intervened, arresting several activists. Scuffles ensued. 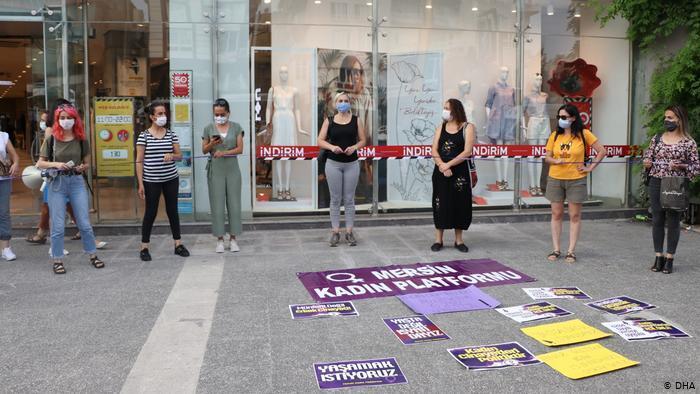 Following the murder of Pinar Gültekin, women's rights activists in the west of the country in particular have been taking to the streets to call for greater protection for women. During a demonstration in Izmir, the police moved in with force to break up the peaceful demonstration. According to one protester, some women were "illegally detained, beaten and abused" by the police

Arzu Sert, who attended the Izmir protest, told Deutsche Welle (DW) she was violently abused while in police custody. She recounts how she and others had gathered outside a cultural centre in the city's Alsancak district to make a press statement. Then, as the march got underway, police officers attempted to block the route with barricades, Arzu Sert says "Then we were illegally detained, beaten and abused," she adds.

Lawyers and attorneys have expressed outrage over the violent crackdown. Zeynep Tepegoz, a lawyer, says Turkish citizens have a constitutional right to stage peaceful protests. Police acted illegally, she asserts: "The events in Izmir indicate that police deployed disproportionate force [ ... ] there is no justification for pinning protesters to the ground and beating them," she says.

Many Turkish women's right groups say the crackdown reflects a wider societal problem. They say many women who are being abused seek – but never receive – proper help. Melek Önder of the We Will Stop Femicide initiative told DW that Turkish police, the government and state officials must do much more to protect women at risk: "There were cases where women who were being violently abused asked for help, but nothing happened," she says.

One day after Pinar Gültekin's murder, Turkish President Recep Tayyip Erdogan took to Twitter to express his condolences. He wrote: "Yesterday, we were overwhelmed with pain when we had to learn that Pinar Gültekin was murdered by a villain. I despise all crimes committed against women."

Many women's right activists, however, say the president's words ring hollow. After all, the government has done little to implement the so-called Istanbul Convention, which aims to tackle violence again women and domestic abuse, as well as promoting gender equality. The initiative was launched by the Council of Europe in 2011, and Turkey was the first country the ratify the treaty a year later. It has since adopted legislation reflecting the treaty. 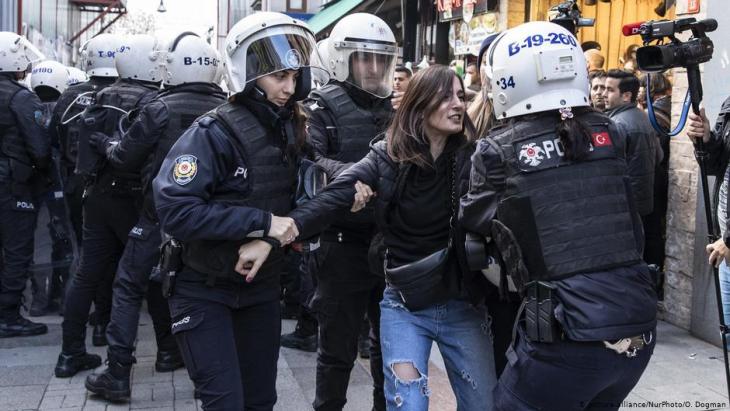 Pictured here: in December 2019, hundreds of women gathered in Istanbul to perform a feminist protest dance and song from Chile. The viral song defends rape victims and denounces the state for not doing enough to combat violence against women. Istanbul police deployed tear gas to stop the rally and arrested some of the women

Women's rights activists regard the Istanbul Convention as a powerful tool to fight violence against women. But many criticise that the treaty is not being properly implemented. Even though signatory countries have vowed to do so, in reality few are applying and enforcing the enshrined principles. There are also too few measures designed to help and protect endangered women. Turkish protesters have therefore called for the treaty to be fully implemented in the country.

Deeply religious forces within Turkey regard the Istanbul Convention as a threat to country's traditions and have been undermining efforts to see it implemented. Ebru Asiltürk, the spokeswoman for women's affairs for Turkey's Islamic conservative Saadet Party, is one such critic. In an opinion piece for Turkey's conservative daily Milli this May, she wrote that the treaty would be like a "bomb" destroying Turkey's traditional family structure. She argued it would threaten the "financial and moral integrity of families". In her view, the convention breaches Article 41 of the Turkish Constitution which enshrines the protection and unity of the family. She therefore urges Turkey to abandon the treaty altogether.

Many people on social media expressed support for Asiltürk's viewpoint, with some claiming on Twitter that the treaty is a simply means by the West to hurt Turkey.

Turkey's government, meanwhile, has not displayed any real determination to tackle the problem of femicides and has failed to side with those who decry it. Protest marches calling for women to be better protected are regularly dispersed. When 2,000 women gathered in Istanbul on 25 November for a demonstration marking the International Day for the Elimination of Violence against Women, police disbanded the protest using tear gas and rubber bullets.

Relations between Turkey and Russia are ambivalent. Moscow is nonetheless trying to prop up the leadership in Ankara. Elections are to be held in Turkey in June – and the last ... END_OF_DOCUMENT_TOKEN_TO_BE_REPLACED

All eyes in Turkey are on a court hearing scheduled for January 30 into a child abuse case that allegedly occurred with the knowledge of one of Istanbul's most powerful Islamic ... END_OF_DOCUMENT_TOKEN_TO_BE_REPLACED

Any reconciliation between Turkey and Syria’s Assad regime would have disastrous consequences for many Syrians, explains Syria expert Kristin Helberg END_OF_DOCUMENT_TOKEN_TO_BE_REPLACED

The poetry of Pir Sultan once prompted uprisings in the Ottoman Empire. To this day, Alevis identify with him. Rainer Hermann visited Mehmet Celebi, a direct descendant of the ... END_OF_DOCUMENT_TOKEN_TO_BE_REPLACED

There are signs of an imminent normalisation of relations between Turkey and Syria. This would allow Erdogan to score political points domestically before the upcoming elections ... END_OF_DOCUMENT_TOKEN_TO_BE_REPLACED

Turkey will mark the centenary of the proclamation of the Turkish republic in October. But 2023 will be an important year in another respect too: Turks will go to the polls in ... END_OF_DOCUMENT_TOKEN_TO_BE_REPLACED
Author:
Burcu Karakaş & Daniel Derya Bellut & Hilal Köylü
Date:
Mail:
Send via mail

END_OF_DOCUMENT_TOKEN_TO_BE_REPLACED
Social media
and networks
Subscribe to our
newsletter