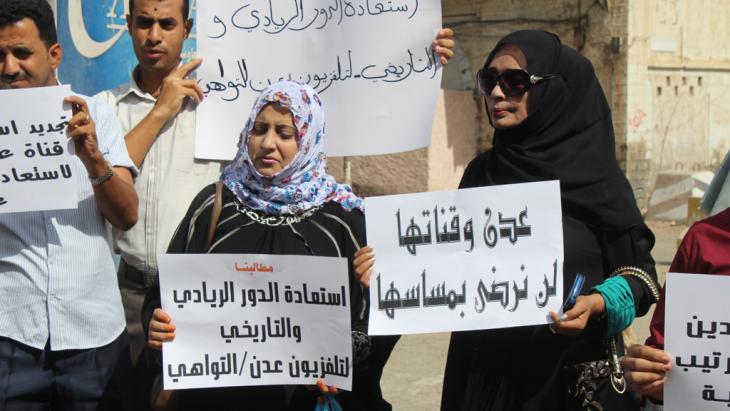 Fifteen years after Security Council Resolution 1325 called on all parties to protect women and girls from gender-based violence, such violence remains widespread throughout the Arab world. The good news is that ever more young Arab men are joining women′s rights organisations. By Katja Dombrowski

Heide Serra from Amica, a German aid organisation, notes a ″high willingness″ among men to engage in the fight for women′s rights as fundamental human rights. Amica works with Nataj, a newly founded women′s organisation in Benghazi, Libya. Nataj addresses all issues women face in the context of the country′s difficult transformation.

28-year-old Marrwan Gargoum is a well-known activist. He assists the Nataj management. He appreciates that women played an important role in Libya′s revolution. Today, life is very difficult, and especially so for women, in the war-ravaged city. But: ″There is a strong women′s movement in Benghazi, and it′s growing every day,″ Gargoum told a conference in the German city of Freiburg on 25 November, the UN international day for the elimination of violence against women. The conference was organised by Amica in collaboration with the Heinrich Boll Foundation.

Protesting against sexual violence: according to "Ahram Online", a United Nations survey conducted in co-operation with the Egyptian Demographics Office and including seven of 27 local authorities in April 2013 revealed that practically every Egyptian woman has experienced some kind of sexual harassment. The spectrum ranges from harassment through to rape

93 percent of Egyptian women are victims of sexual violence

Mohammed El Khateeb from Egypt is another young man committed to protecting women′s rights. He works with HarassMap in Cairo, an initiative that aims to create an environment that does not tolerate sexual harassment. ″Ninety-three percent of all women in Egypt become victims of sexual harassment or abuse and 81 % of the harassment happens in public, with no one interfering,″ El Khateeb says. In his view, raising awareness for the issue is crucial, since many Egyptians deny it exists at all. ″One has to acknowledge the problem in order to tackle it,″ the 23-year-old man says. HarassMap has posted an interactive map online, so victims and witnesses can report cases of harassment in public.

With regard to the Arab spring of 2011, El Khateeb says the people wanted Egypt to change. ″There is an active civil society in Cairo,″ he says, ″and women and men work together.″ According to El Khateeb, many men find sexual harassment offensive and want to prevent it. In his eyes, it is the job of the police and courts to sanction abusive behaviour, but civic activists must make sure social attitudes change so gender abuse will generally be considered unacceptable.

The problem pre-dates IS

Annemarie Sancar from the Swiss Peace Foundation′s Centre for Peace Promotion (KOFF) insists that protecting women, as Resolution 1325 requires, must not lead to their exclusion from the public sphere. ″That would mean backing down,″ she says. In her view, prevention is most important and root causes must be tackled.

Charting the situation of women in Egypt: the page harassmap.org uses mobile online technology to fight the social acceptance of sexual violence. In 2012 harassmap won the Deutsche Welle BOB Award for "Best Use of Technology for Social Good"

In the regions controlled by Islamic State in Syria and Iraq, violence against women is especially widespread. Laila Alodaat is a Syrian human-rights lawyer, who works for the Women′s International League for Peace and Freedom (WILPF). She points out that the problem did not start with IS but has long been tolerated in both countries.

Women are at particular risk

In armed conflicts, however, women are exceedingly vulnerable. ″Generally, they don′t fight, they don′t hold arms, they cannot defend themselves,″ Alodaat says. Furthermore there are many restrictions, for example of movement. ″Syria's legal and administrative system has collapsed - this has a big impact on women,″ Alodaat bemoans, summarising: ″The armed conflict has taken away the few gains made by Syria′s women since independence.″

Jan Ilhan Kizilhan, psychologist and Orientalist, reports horrible atrocities against the Yazidi minority in northern Iraq. ″Women are sold by IS, enslaved, raped, tortured,″ he says. According to him, IS is following a fascist ideology, dehumanising others and pursuing a strategy of genocide against the Yazidi.

The Yazidi are relatively well known, but other religious and ethnic minorities are not. ″Millions of women face similar dangers,″ Alodaat warns, calling for more prevention efforts.

Home
Print
Newsletter
More on this topic
Mona Eltahawy: "Why do you hate us so?": The Middle East needs a sexual revolutionFemale rights and the Arab Spring: A backward leap for womenWomen's rights in post-revolutionary Egypt: A second revolt for Sheherazade's daughters
Related Topics
Feminism in Islam, Gender, Libya after Gaddafi, Minorities in the Muslim world, Muslim women, Sexism and violence against women, Women in the Islamic world, Yazidi
All Topics

Ten years after Egypt's January 25 revolution, many of those who led protests are either disillusioned or in jail. ... END_OF_DOCUMENT_TOKEN_TO_BE_REPLACED

Egypt has never been called to account for the murder of Giulio Regeni, nor for the numerous human rights violations committed by the Sisi regime. Focusing only on stability, ... END_OF_DOCUMENT_TOKEN_TO_BE_REPLACED

Ten years after the Tahrir square protests in Cairo, Egypt’s human rights record is disastrous. On the occasion of the anniversary of the 2011 revolution, several international ... END_OF_DOCUMENT_TOKEN_TO_BE_REPLACED

END_OF_DOCUMENT_TOKEN_TO_BE_REPLACED
Social media
and networks
Subscribe to our
newsletter