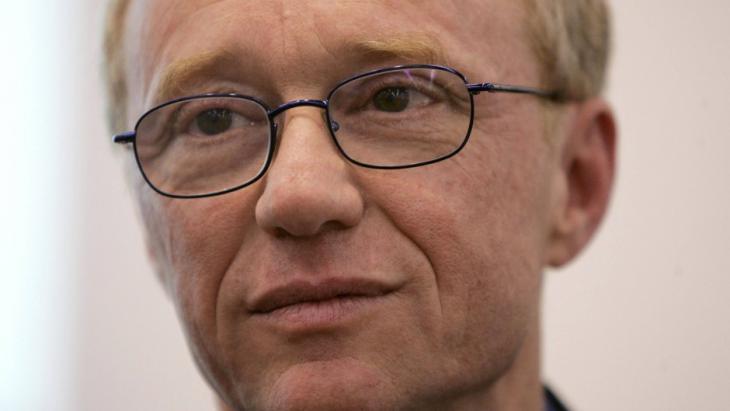 Violence in Israel
Extremism is spreading

Blind, archaic hatred has driven a number of Israelis to commit murder in recent weeks. Today, it is evidently enough just to be a Palestinian or gay to be the target of attacks in Israel. An essay by the Israeli writer David Grossman

The murdered infant Ali Dawabshe gives me no peace. The thought that a man could tear open a window in the middle of the night and throw a Molotov cocktail into a room where parents and their children are sleeping haunts me. These thoughts and images are enough to break your heart. Who is the man, who are the men who could do such a thing? They and their associates walk among us this morning. Are their deeds written on their faces for all to see? What did they first have to kill inside themselves in order to be able to kill a family?

Benjamin Netanyahu and a few right-wing ministers immediately and vehemently condemned the murder. Netanyahu paid his condolences at the hospital, expressing his shock. His visit there was humane, authentic, correct and necessary. But one has to wonder how the prime minister and his fellow ministers manage to persist in utterly ignoring the link between the flames of the fire they have been fanning for the last 20 years and the flames of this recent arson attack.

How can they fail to see the connection between the occupation that has been going on now for 48 years and the sinister, fanatical reality in the border regions of the Israeli consciousness, a reality that is gaining ground every day? This reality is now putting out feelers towards the political centre ground and is gaining legitimacy and acceptance in the Israeli population, the Knesset and the cabinet.

In their staunch denial of this reality, the prime minister and his supporters are turning a blind eye to the misguided sentiment that has inexorably insinuated its way into the consciousness of the settlers over the course of nearly 50 years, namely that there are two kinds of people. One kind is subject to the other and thus seems by nature to be less worthy. The subjugated one is – how shall I put it? – a lesser person than the occupier. This attitude apparently enables people with a certain mental make-up to take another person's life with frightening ease, even if that other person is only one and a half years old. 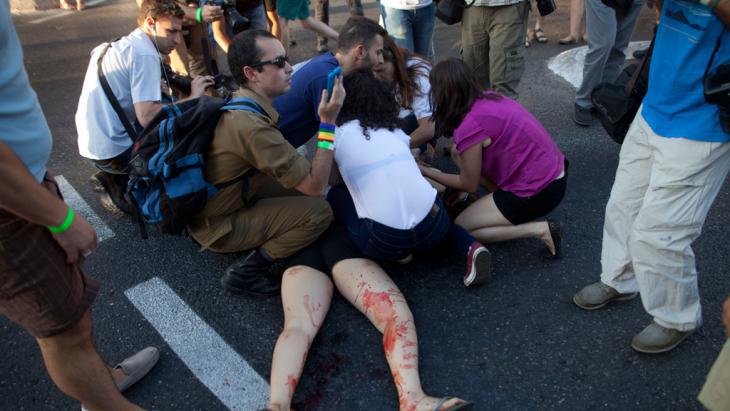 Deep-seated hatred: on 30 July 2015, an ultra-Orthodox Jew stabbed six people attending the Jerusalem "Gay Pride Parade" with a knife. A 16-year-old girl died as a result of the injuries she sustained in the attack

Exterminating those they hate

In this way, the two acts of violence that were committed at the end of July – the stabbing at the Jerusalem Gay Pride Parade and the arson attack on a baby – are connected, because they spring from a similar attitude. In both cases, blind, archaic hatred drove people to murder in an attempt to eradicate a hated people.

The man who set the Dawabshe family's house on fire knew nothing about its inhabitants, about their hopes and dreams. He knew only that they were Palestinians, and that was enough for him and his commanders. In other words, their mere existence was reason enough to want to wipe them off the face of the earth.

For more than a hundred years now, Palestinians and Israelis have been caught up in a vicious circle of murder and revenge. In their battle against us, the Palestinians have murdered hundreds of Israeli children, killed entire families and committed crimes against humanity.

With the help of aircraft, tanks and snipers, the State of Israel has done similar deeds in its fight against the Palestinians. What happened a year ago in the Gaza Strip during the military operation "Zuk Eitan" ("Protective Edge") is still fresh in our minds. But the entire process taking place within the State of Israel, with all its vicious excesses and ramifications, is destructive in another deceptive way.

The Israeli leadership still doesn't seem to understand – or perhaps it doesn't want to admit what for it is an unbearable fact – that the Jewish terrorism it is harbouring within has now declared war on the state. And now the state is either unable or too afraid or too ambivalent to face up to this challenge and call it by its name.

Day-in day-out, sinister and fanatical elements among us, hermetic in their extremism, are kindling their own religious nationalist fire and ignoring the boundaries normally set on behaviour by reality, morality and common sense. As if intoxicated, they become entangled in the most ludicrous delusions of which the human soul is capable. The more insecure the economic situation, the more they thrive. A compromise with these forces is not possible. 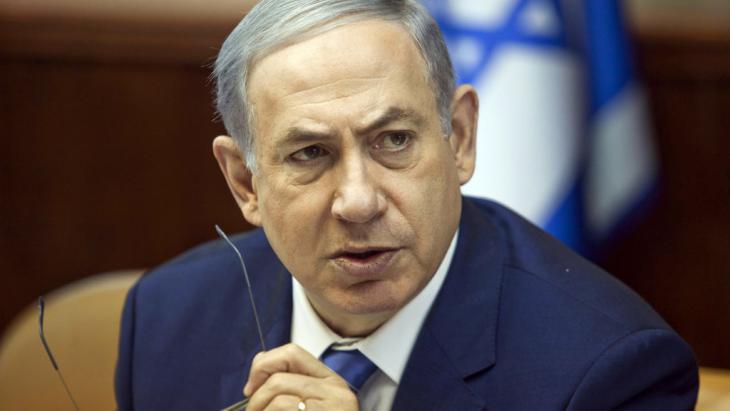 "Does Netanyahu see in all clarity that during all those years when he was devoting his undivided attention to torpedoing the Iran nuclear agreement, a highly volatile situation has arisen in this country – a situation that is no less dangerous than the threat posed by Iran, and that he appears helpless to do anything about it?" asks David Grossman

Rigorous action against terror is needed

The Israeli government must proceed against them just as rigorously as it does against Palestinian terrorism, because they are no less dangerous and no less determined. These are totalitarian extremists, who, as we know, are capable of extremely misguided actions, as for example an assault on the Al-Aqsa Mosque would be, an assault that would in all likelihood spell doom for Israel and the entire Middle East.

Will an atrocity like the burning of a baby bring Israel's right wing to its senses? Will these people finally comprehend what reality has been screaming in their faces all these years, namely that persisting with the occupation and refusing to engage in a dialogue with the other side could spell the end of Israel as the state of the Jewish people and as a democracy? As a place with which young people identify, where they would like to live and raise their children?

Does Netanyahu see in all clarity that during all those years when he was devoting his undivided attention to torpedoing the Iran nuclear agreement, a highly volatile situation has arisen in this country – a situation that is no less dangerous than the threat posed by Iran, and that he appears helpless to do anything about it?

It is hard to say how we can extricate ourselves from this calamity and return to normalcy. By yielding to the settlers' activism and through their tacit agreement with them, Netanyahu and his friends (along with most of his predecessors) have encouraged these developments. Now, reality has caught up with them and they are left to look on, horrified and paralysed.

For dozens of years now, the State of Israel has being showing the Palestinians its dark side, and this darkness has long been seeping into its own deepest reaches. The process has accelerated since Netanyahu's recent election victory, because since then, no one has been willing to confront the predatory ruthlessness of the right wing. Atrocities such as the burning of a baby are symptoms of a deeply rooted social ailment and relentlessly confront us Israelis with this diagnosis. They proclaim in fiery letters that the door to a better future is gradually closing.

Home
Print
Newsletter
More on this topic
Israel's crisis politics: On hope and despair in the Middle EastSecular versus religious in the Israel Defense Forces: Into battle with the BibleInterview with Daniel Barenboim: "The world is suffering from a lack of leadership"
Related Topics
Benjamin Netanyahu, Gaza War, Israeli settlement, Israeli-Palestinian conflict
All Topics

Algeria‘s regime is again cracking down on anti-fracking activists and the unemployed in the country‘s south. Yet EU countries remain keen to scale up their energy cooperation ... END_OF_DOCUMENT_TOKEN_TO_BE_REPLACED

Anti-Semitic motifs have no place at Germany’s documenta art show or anywhere else in the world, stresses Meron Mendel, director of the Anne Frank Educational Centre in Frankfurt ... END_OF_DOCUMENT_TOKEN_TO_BE_REPLACED

Fifty-five years after Israel began occupying Palestinian lands, it is more difficult than ever to imagine a way out. The seeds of the two-state solution that were planted by ... END_OF_DOCUMENT_TOKEN_TO_BE_REPLACED

Yazan Khalili is spokesman for The Question of Funding, a collective of artists taking part in the leading German contemporary art festival Documenta 15. Here, he responds to ... END_OF_DOCUMENT_TOKEN_TO_BE_REPLACED

When times are tough, the exchange of ideas and perspectives becomes especially important. It takes dialogue. And at Deutsche Welle, we need distributors and cooperative partners ... END_OF_DOCUMENT_TOKEN_TO_BE_REPLACED

Every week, Jewish, Christian and Muslim youths meet to sing together. And they do so in the middle of a city where Israelis and Palestinians are often at loggerheads. Anja Koch ... END_OF_DOCUMENT_TOKEN_TO_BE_REPLACED
Author:
David Grossman
Date:
Mail:
Send via mail

END_OF_DOCUMENT_TOKEN_TO_BE_REPLACED
Social media
and networks
Subscribe to our
newsletter