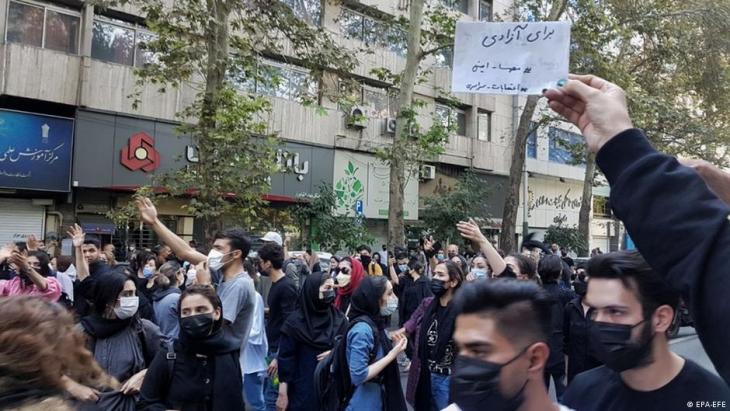 Iranian security forces opened fire with live ammunition and tear gas on demonstrators in the north-western city of Marivan in Kurdistan Province on Sunday, eyewitnesses reported. The demonstrators were protesting at the death of a Kurdish female student in the city on Saturday. They are reported to have attacked the offices of the city's parliamentary representatives.

According to the Hengaw human rights organisation, which monitors the treatment of Iran's Kurdish population from Norway, dozens of demonstrators were injured, with deaths feared. There was no independent confirmation of the reports.

According to Hengaw, the female student was killed after participating in the protests. Iranian state media rejected the reports, saying the security forces had gone into action after young people had been killed during the protests.

Since the violence erupted some seven weeks ago, the deaths of several young demonstrators have led to a cycle of violence when protesters go onto the streets at the end of the customary 40 days of mourning.

The Marivan protests came after state media reported that four police officers had been killed in the south-eastern province of Sistan and Balochistan.

Over recent weeks there have been violent clashes between demonstrators and the security forces in the province bordering Pakistan and Afghanistan.

On 30 September, dozens of protestors were killed in the provincial capital of Zahedan in a clash that has become known as "Bloody Friday."

An influential Sunni cleric in the region, Maulawi Abdulhamid, has recently expressed criticism of the government's policy regarding the demonstrators in the largely Shia country, with other local clerics backing his words.

Abdulhamid has called for a referendum on the demonstrators' demands. The mass protests were triggered by the death in police custody of 22-year-old Iranian Kurdish woman Mahsa Amini, who was arrested by the morality police for failure to comply with the country's compulsory headscarf rules for women.

Since Amini's death on 16 September, tens of thousands of people have been demonstrating against the repressive course of the government of the Islamic Republic. The protests have become one of the biggest tests of the country's leadership since the state was founded.

According to state media, a large majority of Iran's parliament has called for harsh sentences for imprisoned protesters. In a statement on Sunday, 227 out of 290 parliamentarians called on the judiciary to pass appropriate sentences.

The politicians accused the participants in the recent nationwide protests of a "war against God", which could result in the death penalty under Islamic law. Hardliners and conservative politicians have a majority in Iran's parliament.

The statement went on to say, according to the state news agency IRNA: "The US and other enemies have openly entered the field in the unrest and have taken responsibility for instigating and organising the unrest".

In recent weeks, Tehran had already blamed its arch-enemies for the protests. Political reforms are not yet in sight. Iran's judiciary had announced that it would show no mercy. The statement was initially an appeal. It is unlikely that death sentences will be pronounced or carried out on the scale demanded by the parliamentarians.

According to human rights activists, more than 14,000 people have been arrested since the beginning of the anti-regime protests.    (dpa)

More on this topic
Hadis, Minoo and Ghazaleh: The women victims of Iran's crackdownShirin Ebadi: "Iran will be democratic one day"Protests in Iran: Murderous repression by a desperate regime
Home
Print
Newsletter
MoreAll Topics

END_OF_DOCUMENT_TOKEN_TO_BE_REPLACED
Social media
and networks
Subscribe to our
newsletter