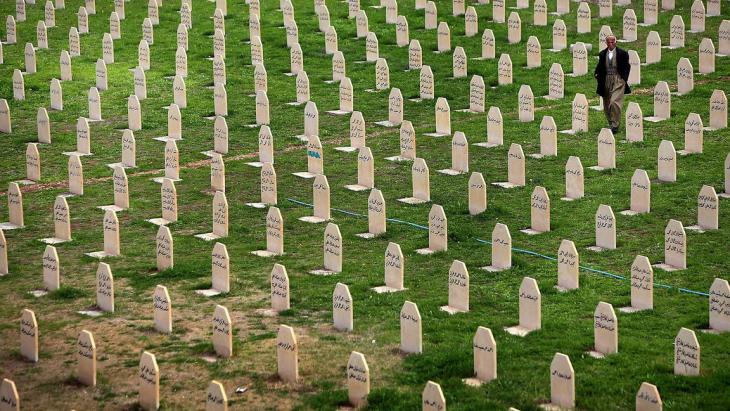 The First Gulf War, the chemical attack on the Iraqi village of Halabja in 1988 and the role played by foreign companies in the build-up of chemical weapons in the region were the main topics at the most recent "Visions of Iran" film festival in Cologne. By Bernd G. Schmitz

The chemical attack on the Kurdish village of Halabja is considered the greatest tragedy of the Iran-Iraq War. What is less well known is that similar crimes were committed both before and afterwards – all instances of punitive action taken against Iraq's Kurdish population, which was accused by Saddam Hussein's Baath regime of working collectively with the arch-enemy, Iran.

In the 2015 film "Zemnako" by the Iranian director Mehdi Ghorbanpour, the protagonist only discovers as a young man that he survived the chemical attack of Halabja as a baby, but was separated from his family in the confusion of the attack and subsequently adopted by an Iranian woman.

The documentary follows Zemnako in his search for his ancestral roots. With persistence and luck, he succeeds in establishing contact with the authorities in the Iraqi part of Kurdistan. His subsequent journey there and the genetic test involving a number of potential relatives become a media event that representatives of the Kurdish regional government exploit to their own ends.

At the end of the film, Zemnako, who is by this stage overcome with emotion and surrounded by television cameras, is finally able to embrace his birth mother. But his joy is marred by sadness when he learns that his father and siblings were killed in the poison gas attack.

Another facet of the Iran-Iraq War was highlighted by the film "Memories for all Seasons", which was also made in 2015. In this film, director Mostafa Razzagh-Karimi, who lives in Austria, recalls how a group of Iranians was brought to Vienna in 1984 for medical treatment. 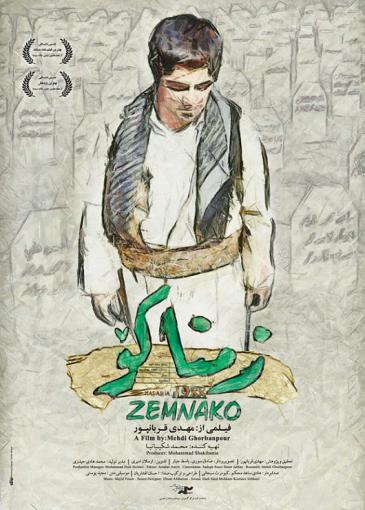 Searching the past: in the 2015 film "Zemnako" by the Iranian director Mehdi Ghorbanpour, the protagonist only discovers as a young man that he survived the chemical attack of Halabja as a baby, but was separated from his family in the confusion of the attack and subsequently adopted by an Iranian woman

The black-and-white film footage of the arrival of the wounded and the soldiers suffering the after-effects of a chemical attack really leaves a lasting impression. Some don't even survive the first few days after the attack; others need lengthy treatment in the hospitals of Vienna followed by convalescence in one of the sanatoria outside the city boundaries. However, even after the men return to Iran, they continue to suffer the consequences of their injuries.

For Iranian director Razzagh-Karimi, these historical images were not enough. He added interviews with contemporary witnesses who were involved in treating the Iranian war-wounded back in 1984. One of them is Professor Gerhard Freilinger. This dedicated doctor not only treated some of the Iranian soldiers in his Viennese clinic, he also travelled with a UN delegation to Khorramschahr in the Iran-Iraq border region to secure evidence that his Iranian patients had indeed been victims of poison gas.

During the discussion that followed the screening, it became clear how differently some viewers felt about the information that a 66-minute-long documentary can impart. The main criticism was that the film did not go into any detail on the origins of the chemical weapons and the people who made them. This was a very important aspect for many of those involved in the discussion, as they themselves had taken part in protests in the 1980s, calling for the prohibition of chemical weapons.

Dr. Karin Mlodoch of the association "Haukari" was on the podium. This Frankfurt-based association looks after the victims of chemical attacks and the victims of political and social violence – above all women – in north-eastern Iraq. "The people there are not just suffering from the late effects of these attacks on their health, but also from the feeling that the world remained largely silent about the chemical attacks on the Kurdish population," says Mlodoch, giving one motivation for her work. The attack on Halabja in March 1988 was legitimised by the perpetrators as an act of retaliation for the cross-border movement of Iranian troops and Kurdish resistance fighters. This act of revenge affected above all civilians.

The devastating destruction caused by the "Anfal" campaign

In addition to the tragedy of Halabja in which up to 5,000 people lost their lives, there was also the so-called "Anfal" campaign, a large-scale military campaign in the Kurdish resistance areas along the border. It is said that thousands of villages were destroyed during this campaign; over and over again, poison gas was used against civilians. During the operation, which began in the autumn of 1987 and ended in 1989, over 100,000 people were abducted and killed.

The Iran-Iraq War and the involvement of foreign companies was also a focus of the presentation given by the film-maker Negar Tahsili at the film festival. Tahsili, a former scholarship holder at the Academy of the Arts of the World in Cologne, experienced the war as a child in Tehran. For her project "Museum of Peace: An audiovisual tour", she interviewed people who work at the Tehran Peace Museum on camera. 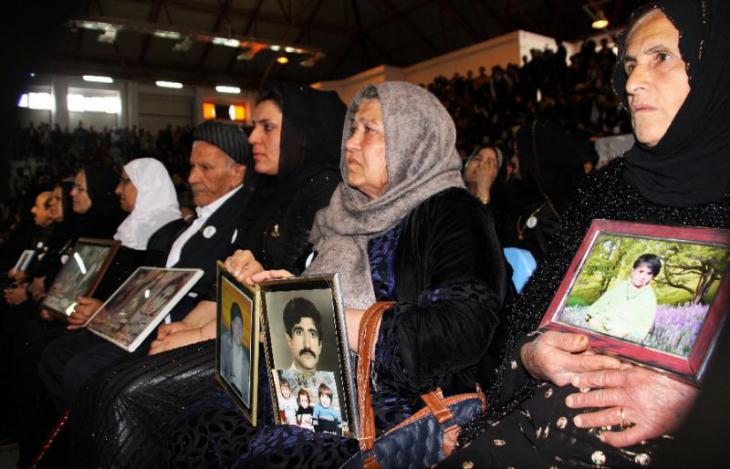 Remembering the victims of the massacre: on the thirtieth anniversary of the attack, a victimsʹ association filed a suit in Halabja against three German companies that are said to have been involved in the Iraqi chemical weapons programme. The American law firm representing the victims is demanding compensation in billions from the businesses concerned, which stand accused of abetting genocide

In these interviews, the veterans, who are visibly scarred by their war injuries, relate not only their personal experiences of the chemical attacks on the frontline, but also raise the issues of blame and responsibility: who helped Iraq get its hands on chemical weapons and why were so few companies held accountable for their actions?

Today, it is known that Singapore, the Netherlands, Egypt, India, Germany, Luxembourg and Brazil provided possible basic substances. The equipment needed for production came from Spain, Austria and France. The lion's share, however, (52 percent) came from Germany. In this context, the name of the laboratory equipment manufacturer Karl Kolb of Dreieich near Frankfurt is often mentioned. The German news weekly Der Spiegel has often reported on the role played by this company and its now defunct subsidiary, Pilot Plant, in the production of Iraqi poison gas. German courts never felt there was enough evidence for a conviction, as there was in the case of the Dutch entrepreneur Frans van Anraat.

Negar Tahsili also conducted some research on the Kolb website as part of her preparation for the presentation. She was not all that surprised to learn that the section on the company's history describes how Karl Kolb received the Order of the Federal Republic of Germany in 1983, but makes no mention of his business links to Saddam Hussein's Iraq.

She was, however, utterly stunned to learn from the website that the company opened an office in the Iraqi city of Basra in 2010 and even sent a company representative to a scientific conference in Tehran in 2017. "It is," she said, "as if the war, the poison gas and the business deals never happened."

Nouara may be 65, but she is ready to join thousands of others who burn their ID and pay traffickers for the chance of a new life in Europe. Zineb Bettayeb reports END_OF_DOCUMENT_TOKEN_TO_BE_REPLACED

Education for girls and women is still possible in Afghanistan, says Reinhard Eroes of the Kinderhilfe Afghanistan initiative. In interview with Elisa Rheinheimer, he talks about ... END_OF_DOCUMENT_TOKEN_TO_BE_REPLACED

Locals in the Middle East have said European critics are showing bias and hypocrisy when they condemn Qatar. Observers agree that Qatar has had to deal with more criticism than ... END_OF_DOCUMENT_TOKEN_TO_BE_REPLACED

In Doha, Arabs from Morocco, Tunisia, Egypt and Algeria are gathering to celebrate the first ever FIFA World Cup to be held on Arab soil. The criticism from Europe? Over the top, ... END_OF_DOCUMENT_TOKEN_TO_BE_REPLACED

Canan Topcu came from Turkey to Germany as a child. In her essay, she describes how bothered she was by the racism she encountered in her country of origin when she travelled ... END_OF_DOCUMENT_TOKEN_TO_BE_REPLACED

Comments for this article: Halabja – casting a long shadow

"War is terrible, but it is terribly profitable." Some of what is sold and the profits, supported or ignored by the Western and non-Western states, help maintain the living stardard of the citizens of the countries involved.

END_OF_DOCUMENT_TOKEN_TO_BE_REPLACED
Social media
and networks
Subscribe to our
newsletter