Councils in urban areas are even less likely to get funding, as what the government does spend skews heavily toward rural areas to subsidise the monarchy′s tribal base – a factor that further lowered expectations for the councils in urban areas, which saw especially low participation at just 16 percent in Amman and 20 percent in Zarqa.

Voter turnout averaged about 31 to 32 percent across the kingdom, compared to 37 percent in last year′s national elections. When asked if the election was a ″success″, Khalid al-Kalaldeh, head of the Independent Electoral Commission, stressed that it was the first time Jordan had held local elections and while he wished the turnout had been higher, argued that the lack of major evidence of fraud showed it was a success. 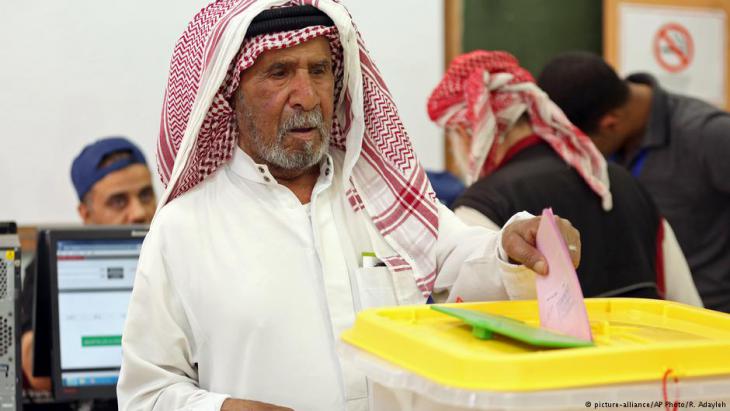 A golden opportunity: ″while local authorities may not live up to the expectations hyped by government planners, they may give the Islamist opposition a platform from which they can criticise the central government when money fails to come through for their proposed capital investment projects. And if money does come through, they can claim credit for subsequent development,″ writes Sowell

The results were roughly a replay of last year′s national elections. Of the few seats won by party lists, Islamists won a modest plurality in a highly divided field, while the strong majority of seats were won by a range of independent tribal candidates.

The National Coalition for Reform (NCR), the list backed by the Muslim Brotherhood′s Islamic Action Front and which included allied tribal candidates, claimed wins for 78 of its 154 candidates.

The NCR chose to run only in the areas where it thought it had the best chance of winning, most notably heavily Palestinian urban areas, so this was still only a fraction of the total seats across the country. Twenty-two of the seats in the Amman Secretariat were up for election and the NCR ran for twelve of them and won five. According to Murad Adaileh, head of the NCR′s election office, it won 41 of 88 contested local council seats and 25 of 48 contested provincial council seats.

The NCR also won three of six contested mayoralties, most notably in Zarqa, Jordan′s second-largest city, where prominent Brotherhood leader Ali Abu Sakr was elected mayor – and since the mayor of Amman (the largest city) is appointed, not elected, this gives an Islamist the largest directly elected mandate in the country. Meanwhile, the government-aligned Muslim Centre Party, the NCR′s primary rival, claimed 33 seats, including three mayoralties, five seats in the Amman Secretariat, sixteen municipal council seats and nine in the provincial or local councils.

In this essay, renowned Lebanese journalist and writer Hazem Saghieh asks whether the Arab Levant, which stretches from Iraq in the east to Egypt in the west, will remain an ... END_OF_DOCUMENT_TOKEN_TO_BE_REPLACED

With his fist bump greeting for a man he previously called a pariah, US President Biden has paved the way for Saudi Crown Prince Mohammed bin Salman's return to the international ... END_OF_DOCUMENT_TOKEN_TO_BE_REPLACED

The murder of a female student at Mansoura University in the Nile Delta has sparked a long overdue debate on femicide in Egypt. Karim El-Gawhary reports from Cairo END_OF_DOCUMENT_TOKEN_TO_BE_REPLACED

When times are tough, the exchange of ideas and perspectives becomes especially important. It takes dialogue. And at Deutsche Welle, we need distributors and cooperative partners ... END_OF_DOCUMENT_TOKEN_TO_BE_REPLACED

Women in the Levant have long used needlework to depict the region’s history, its landscapes, customs and traditions. Intricately embroidered panels, varying in style, colour and ... END_OF_DOCUMENT_TOKEN_TO_BE_REPLACED

A straightforward message emerged from last week’s meeting in the Negev desert of the foreign ministers of four Arab countries, Israel and the United States: Israel is key to the ... END_OF_DOCUMENT_TOKEN_TO_BE_REPLACED
Author:
Kirk H. Sowell
Date:
Mail:
Send via mail

END_OF_DOCUMENT_TOKEN_TO_BE_REPLACED
Social media
and networks
Subscribe to our
newsletter