Sympathy with the Devil

For their documentary on the Sabra and Shatila massacres, the film-makers chose to portray the perpetrators sympathetically in order to shed more light on the causes for war crimes. Christina Förch reports

For their documentary on the Sabra and Shatila massacres that took place during the Lebanese civil war, the film-makers chose to portray the perpetrators sympathetically in order to shed more light on the causes for war crimes. Christina Förch reports 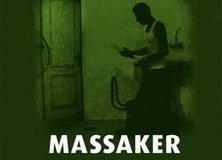 The film was shot in neutral, but claustrophobic rooms. The perpetrators are seated on chairs, giving the impression that they are on trial

​​The nearly 100-minute film "Massaker" (Massacre) deals specifically with six militiamen who participated in the three-day-long massacre in the Palestinian refugee camps Sabra and Shatila in 1982. The massacre took place during the Lebanese civil war.

But the film is also an oppressive document on violence itself, on how violence can happen everywhere – collective violence in war-ravaged countries such as Rwanda or the former Yugoslavia, and violence as the act of an individual perpetrator.

For the film the three directors, Monika Borgmann, Lokman Slim, and Hermann Theissen, interviewed six militiamen from the Forces Libanaises, the Christian militia that carried out the massacre. The filmmakers strive to understand what drove the perpetrators to commit such horrific acts of violence.

Was it a desire for power? Is an unhappy childhood responsible? Or was the barbarous training of the young Christian militia by the Israeli army a possible trigger? Did prejudices against Palestinians, or even brainwashing, lead to the slaughter in which killing became routine?

In the end the documentary film cannot answer this question. "The film perhaps raises more questions than it answers," says co-director Monika Borgmann. As the author of numerous newspaper articles, radio contributions, and this documentary, she has approached the topic of violence on many levels.

While working on this film she came to the conclusion that theoretically everyone has the potential to become violent. This realization helped her to establish a basis of trust with the perpetrators. "They only agreed to talk to us because they felt that we did not judge them."

During the shooting, she reached the limits of her own endurance, says co-director Monika Borgmann

​​In order to understand why war crimes happen, it is not enough to understand the victim. Borgmann believes that perpetrators must also have their say. This was the main reason why the filmmakers concentrated only on the perpetrators.

Working on the film was not easy. Borgmann needed to find some of the perpetrators sympathetic. In her view, if one works on a project like this, one must identify with the protagonists, at least to a certain degree. "We give them a human face in the film – because they are human."

Finding the perpetrators sympathetic posed quite a problem for the filmmakers. "I had a lot of nightmares," Borgmann admits. After translating a forty-minute interview about a particularly barbaric scene of violence – a graphic description of killing with a knife – she reached the limits of her own endurance.

The film does not excuse war crimes; instead it presents the naked truth. This intent is supported by cinematic means. "We made a virtue out of necessity," says Borgmann. The perpetrators were to remain anonymous, so we could not show their faces nor their surroundings.

Instead the filmmakers concentrated on body language, which turned out to be an advantage since body language cannot be easily controlled or censored. Nervous twitches, sweating, or tattoos with Christian symbols – nothing was too intimate for the directors. They engrave these naked truths of the body on film.

The film was shot in neutral, but claustrophobic rooms. The perpetrators are seated on chairs, giving the impression that they are on trial. Various colors form the background, and everything is underexposed. Music provides the film with a somber continuum.

Representatives for perpetrators of all denominations

The filmmakers point out that these perpetrators are representative of the numerous other perpetrators from every religious denomination and political party who went scot-free after the Lebanese government declared an amnesty. Nowadays they often work for the police and the military.

In Lebanon the film will likely unleash fierce debates about perpetrators and victims, about guilt and expiation. A reconciliation process has not yet taken place in this small Mediterranean country.

"The film will reopen old wounds," says Monika Borgmann. In Berlin the film can be shown without reservation – but not in Lebanon. Borgmann, however, can imagine showing the film in Lebanon within the scope of a larger event dealing with the topic of violence, together with other films about other war crimes and supplemented by a series of discussions.

In doing so, the film "Massaker" might be able to initiate the desperately needed process of reconciliation and coming to terms with the past.

END_OF_DOCUMENT_TOKEN_TO_BE_REPLACED
Social media
and networks
Subscribe to our
newsletter