War Crimes in Iraq
Shared Agony of Kurds and Shiites

Under Saddam Hussein, Kurds and Shiities were oppressed, systematically persecuted and murdered in large numbers. Iraq is now attempting to confront these dark chapters its recent history. Details from Baghdad provided by Birgit Svensson

Minister Chnar Abdullah and her delegation stand before 150 white linen sacks at Al Sadr University Hospital: in the six years since the fall of Saddam Hussein, countless mass graves have been discovered in the Najaf Governorate

​​ Even before the plane takes off from the Kurdish town of Erbil, nervous tension fills the air, only increasing as it approaches the city of Najaf in southern Iraq. The female passengers spring into action, trying on various veils with which to cover their heads. Some even wrap themselves in a floor-length black cloak.

For the first time, a delegation from the Kurdish regional government is flying to Shiite-dominated southern Iraq. "How will they greet us?" is the question of the day, "And what will they be like?" It's as if the 22 members of the delegation were travelling to an unknown foreign country. And indeed, that's not so far from the truth. Most of them have never had contact with their Shiite countrymen in the South.

Due to the persecution practiced by Saddam's regime, the governments of Britain, France and the US set up no-fly zones in the 1990s to protect the country's citizens from attacks by the violent ruler – one in the South, and one in the North. Ever since then, worlds have separated Erbil from Najaf, just 700 kilometres away.

As the chartered Boeing 737 from Iraq-Kurdistan lands at the just-opened airport, the reception committee is already visible through the airplane window. Standing at the edge of the runway is a group consisting only of men, wearing black and white turbans and long robes. Just one glance, and everyone knows: we are now in "Iraq-Schiitistan", in the holy city of Najaf.

The founder of the Shiite sect, Imam Ali, is buried here. Najaf has the world's largest Shiite cemetery and the highest religious authority of the Shi'ia faith: the religious schools known as Hawsa. But not only that: in the six years since the fall of Saddam Hussein, countless mass graves have been discovered in the province. Three of them hold the bodies of Kurds.

Chnar Saad Abdullah has come here to take the dead back home to Kurdistan, to the autonomous region in northern Iraq.

The dark chapter of Anfal

Saddam Hussein's Anfal campaign began in 1986 and lasted until 1989: for the first time in history, a government deployed chemical weapons against its own people

​​Being so young has its advantages and disadvantages, says the 36-year-old minister from Kurdistan's capital city of Erbil. Ms. Saad Abdullah is a sociologist and had just finished her doctorate on Saddam Hussein's mass genocide against the Kurds when she was appointed Kurdish minister in charge of dealing with Anfal.

This is an indication of how important it is to her countrymen not to let those seven months in 1988 be forgotten, which Hussein dubbed "Anfal" after the title of a sura in the Koran about how to handle the spoils of war.

A total of 182,000 Iraqi Kurds were allegedly killed during that period, usually by the most brutal of methods. The minister has documented it all, establishing an archive in Erbil. Together with a fellow student, she presented the files and records for use in the still ongoing trial before a special tribunal set up to deal with the crimes of Saddam Hussein.

Even though Hussein was executed in 2006, the trial goes on. His cousin, known simply as "Chemical Ali", who organised poison gas attacks on the Kurds, has likewise been sentenced to death, but is still on trial. A total of twelve cases have been prepared. Only three have been resolved so far.

The military operation against the Kurds began on 23 February 1988, when the Iraqi army began its incursion into the Iran border region, first attacking the headquarters of the PUK (Patriotic Union of Kurdistan), the party to which Iraq's President Jalal Talabani belongs. An internecine war between Iran and Iraq had been raging for eight years, claiming over one million lives, and Saddam Hussein was under increasing pressure.

Later, during their trial, the ex-dictator and his fellow defendants claimed that Kurdish rebels had been cooperating with Iran, the enemy, and that Iraq's campaign against the Kurds must hence be regarded as an act of war.

The Kurds on the other hand view the annihilation as an act of revenge, because the main victims were not their Peshmerga forces but rather to a large extent the civilian population. For the first time in history, a government deployed chemical weapons against its own people.

The Kurdish territories were bombed with mustard gas and sarin. Symbolic of these attacks is the village of Halabja, southeast of Suleimanija, where an attack in March 1988 killed 5,000 inhabitants instantly.

The Iraqi army had conducted a total of eight such "purges" against the Kurds by the by the end of August 1988, not stopping even after the war with Iran was over. 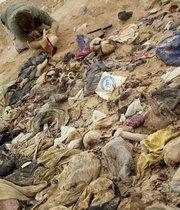 A "Kurdish Holocaust": in the village of Halabja, southeast of Suleimanija, an attack in March 1988 killed 5,000 inhabitants instantly

​​ The systematic way in which people were deported, selected and murdered has been compared with the machinery of annihilation set in motion by Nazi Germany. "Saddam copied Hitler", says Yousif Dzayi, the Anfal minister's fellow student, of the mass murder of his countrymen: "It was the Kurdish Holocaust."

Yousif Dzayi has discovered and provided evidence of lists of those deported, who were separated between various camps. Some were transported to the desert in the southwestern part of the country, where they starved to death or survived only with the secret assistance of nomads living nearby.

Many, however, were brought to various locations in the South, murdered and hastily buried in mass graves. 286 such graves have been found thus far. One of them has now been opened in Najaf. Minister Chnar Abdullah and her delegation stand before 150 white linen sacks at Al Sadr University Hospital, which specializes in the forensic investigation of mass burials.

"We can't open all the graves yet", says Amir Ibrahim, director of the research department at the university. Technical, financial and human resources capacities are limited, and family members of the deceased would react with panic if they knew where the burial grounds were or found themselves standing at the open graves.

According to the Muslim faith, a person is still regarded as alive as long as his body has not been properly buried. This has enormous consequences for the bereft. Widows are not widows as long as their husbands have not been identified and buried. They are not allowed to remarry and do not receive a pension.

"People are sometimes very impatient", Heeman Jamil remarks, confirming what her colleague in Najaf has said. The young Kurdish woman is Amir Ibrahim's counterpart in Erbil and works in the regional government's interior ministry as an expert on mass graves.

Iraq's Ministry of Human Rights in Baghdad has earmarked 1.8 billion dinars (approximately 620,000 euros) for the investigation and uncovering of mass graves throughout the country, she says, but that's by no means enough to dig up the hundreds of thousands of dead, identify them and pay compensation to the survivors.

"Iraq-Schiitistan": Najaf has the world's largest Shiite cemetery and the highest religious authority of the Shi'ia faith: the religious schools known as Hawsa

​​ Besides, she would need more international assistance with her scientific work to cope with so many cases. The problem is that the Kurds were not the only victims of the country's former violent regime. Thousands and thousands of Shiites were also murdered by Saddam and his henchmen and thrown into mass graves. Coming to grips with this common, cruel fate is bringing Shiites and Kurds closer together in the post-Saddam era.

The exchange in Najaf is a first step, beyond the government's involvement, toward cooperating more closely on other levels as well. Somewhat surprised, Heeman Jamil speaks with great respect of the highly professional work of her Shiite colleagues.

Thanks to their precise preliminary examinations, she was able to determine where the dead came from. By now, the remains have been transported to Kurdistan and buried in Sumut/Rizgari in the province of Suleimanija.

In parallel, a controversial discussion has arisen over memorials to the Kurdish genocide. Facing up to the past is one thing, commemorating it another. And yet they are both closely related.

Once the dead have been found and properly buried, those left behind want something to remember them by. There are voices in favour of a comprehensive memorial, and some that plead instead for individual memorials at the places where the genocide took place.

The Zentrum Moderner Orient in Berlin recently organised a conference to which Anfal survivors were invited so that they could view examples of memorials in Germany.

At the end of October, almost three months to the date after the regional elections, a new Kurdish government was formed. Chnar Saad Abdullah is no longer a part of it. But even under the new Minister for Anfal, Majid Muhammad Amin, the discourse on the "proper commemoration" of their past will likely continue to occupy the Kurds for a long time to come.

Operation Anfal in Iraq
Victims without a Lobby
The Iraqi military campaign "Operation Anfal" began exactly 20 years ago in the Kurdish part of the country. More than 100,000 people were taken from their homes, but the ongoing conflicts in Iraq have pushed the victims out of the public consciousness. Ariana Mirza reports

Interview with Nuri al-Maliki
"The Time Has Come to Invest in Iraq"
In Berlin for talks with Chancellor Angela Merkel, Iraqi PM Nuri al-Maliki spoke to DW about how his battle-scarred country is getting back on its feet, and ready to welcome foreign companies. Interview by Mohamed Ibrahim

END_OF_DOCUMENT_TOKEN_TO_BE_REPLACED
Social media
and networks
Subscribe to our
newsletter