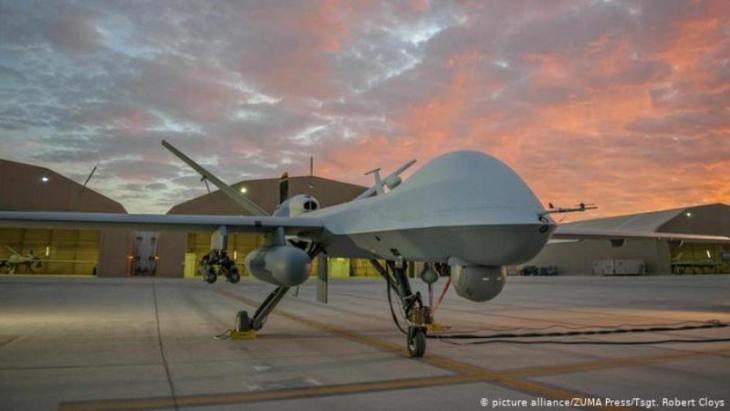 The United States carried out more drone attacks on Afghanistan in 2019 than in any other year since Pentagon records began in 2006. The victims of this questionable military tactic, portrayed as precision strikes to kill alleged militants, are frequently innocent civilians, yet no one seems to care. Emran Feroz reports

The villagers say it has happened to them many times, and never – not once – has it made news anywhere outside Afghanistan. In November 2018, an American Reaper drone targeted a group of villagers in the mountainous area of Afghanistan’s southeastern province of Paktia, killing seven of them. Paktia has long been home to Taliban militants, yet local residents maintain that all the victims were civilians, including three women and one child. They had gone to the remote area to graze their cattle and collect wood. Suddenly, they were dead.

"Nobody wants to listen to us. I doubt the murderers will ever face justice. God is our only hope," said Mohammad Anwar, a resident of Zazai Aryob, a district in Paktia. The killers he is talking about are sitting far away in one of the many U.S. military bases that conduct drone operations.

According to Mohammad Anwar, a relative of the victims, some families lost their male breadwinners, as so often happens with such attacks. “They are desperate. Their future is very uncertain,” he told Foreign Policy by phone.

And now things are more uncertain than ever. The newly signed U.S.-Taliban truce contains confidential appendices that will reportedly feed the Taliban information, thus allowing the Islamist insurgent group to prevent attacks during the U.S. withdrawal. While the Afghan national government and its officials have been side-lined, despite on-going calls for peace talks between all the various Afghan factions, ordinary Afghans still have no recourse to justice and don’t know whether the drone strikes will let up.

You can't "fight terror with terror"

According to Lisa Ling, a former drone technician with the U.S. Air Force in Afghanistan, civilian casualties caused by drone strikes must be investigated and should be regarded as war crimes. "Every strike where community leaders speak out and tell us that we are killing their civilians should be thoroughly investigated by the ICC – the international community should listen," she told Foreign Policy via Signal.

Ling, who has turned whistle-blower and is a staunch critic of drone attacks, believes that "this kind of warfare is wrong on so many levels" and that the Americans cannot "fight terror with terror." Neither the U.S. military nor the CIA responded to a request for comment. But both typically portray drone attacks as "precision strikes" that kill "alleged militants" or "suspected terrorists", and actual on-the-ground investigations rarely take place afterward.

A recent analysis of 228 official U.S. military investigations conducted in Afghanistan, Iraq and Syria between 2002 and 2015, revealed that most investigations of alleged civilian casualty incidents don’t include even a single visit. The military conducted site inspections in only 16 percent of the casualty investigations reviewed for the study by researchers from the Center of Civilians in Conflict and the Columbia Law School Human Rights Institute.

Since returning to power in Afghanistan, the Taliban have steadily eroded the rights and opportunities of women and girls, particularly their access to education. But Afghans are ... END_OF_DOCUMENT_TOKEN_TO_BE_REPLACED

Since seizing power in mid-2021, the Taliban have continued to restrict the rights of Afghan women and girls. At the end of 2022, they banned women from attending higher education ... END_OF_DOCUMENT_TOKEN_TO_BE_REPLACED

German imams have publicly expressed their solidarity with the women of Afghanistan. In a letter of protest, the clerics say that the Taliban regime's decree barring women from ... END_OF_DOCUMENT_TOKEN_TO_BE_REPLACED

At the end of every year, the team at Qantara.de gives you a run-down of the ten most-read articles on the site over the past 12 months. Here is a quick overview of the stories ... END_OF_DOCUMENT_TOKEN_TO_BE_REPLACED

The "Weiter Schreiben" (Keep Writing) project promotes literature from war-torn and crisis-stricken regions and has, most recently, shone its spotlight on Afghanistan. Afghan ... END_OF_DOCUMENT_TOKEN_TO_BE_REPLACED

The Islamic Republic has been unable to quell the civil unrest that erupted three months ago, after Mahsa Amini died after being detained for violating hijab rules. Now the ... END_OF_DOCUMENT_TOKEN_TO_BE_REPLACED
Author:
Emran Feroz
Date:
Mail:
Send via mail

END_OF_DOCUMENT_TOKEN_TO_BE_REPLACED
Social media
and networks
Subscribe to our
newsletter