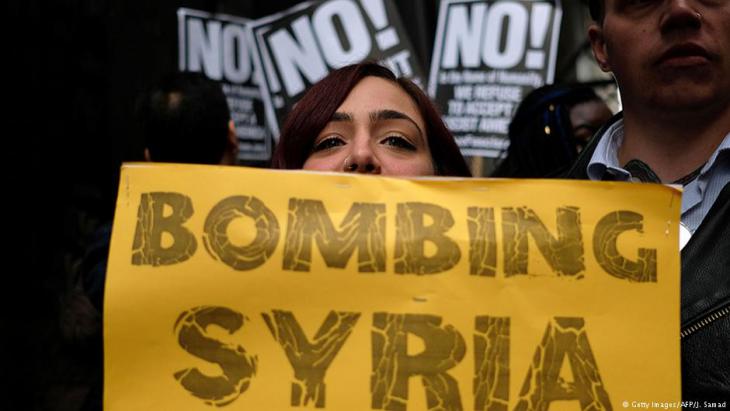 Much of the carnage that has ravaged Syria during the past seven years is due to the actions of the United States and its allies in the Middle East. By Jeffrey D. Sachs

Faced with an alarming risk of a renewed escalation of fighting, it’s time for the United Nations Security Council to step in to end the bloodshed, based on a new framework agreed by the Council’s permanent members.

In 2011, in the context of the Arab Spring, the U.S. government, in conjunction with the governments of Saudi Arabia, Qatar, Turkey and Israel, decided to bring down Syrian President Bashar al-Assad’s regime, even though overthrowing another country’s government amounts to a blatant violation of international law.

We know that in 2012, if not earlier, President Barack Obama authorised the CIA to work with America’s allies in providing support to rebel forces composed of disaffected Syrians as well as non-Syrian fighters. U.S. policymakers evidently expected Assad to fall quickly, as had occurred with the governments of Tunisia and Egypt in the early months of the Arab Spring.

The Assad regime is led by the minority Alawi Shia sect in a country where Alawites account for just 10% of the population, Sunni Muslims account for 75%, Christians make up 10% and 5% are others, including Druze. The regional powers behind Assad’s regime include Iran and Russia, which has a naval base on Syria’s Mediterranean coastline.

Whereas America’s goal in seeking to topple Assad was mainly to undercut Iranian and Russian influence, Turkey’s motive was to expand its influence in former Ottoman lands and, more recently, to counter Kurdish ambitions for territorial autonomy, if not statehood, in Syria and Iraq. 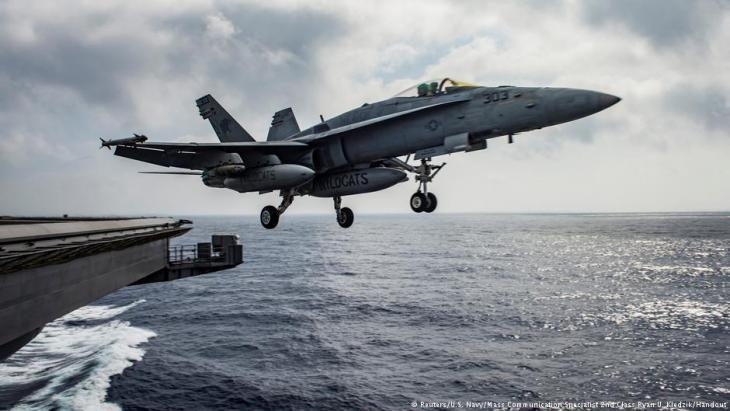 U.S. military intervention in Syria: while the U.S. vehemently complains about Russian and Iranian influence in Syria, America and its allies have repeatedly violated Syrian sovereignty. The U.S. government mischaracterises the war as a civil war among Syrians, rather than a proxy war involving the U.S., Israel, Russia, Saudi Arabia, Iran and Qatar

Saudi Arabia wanted to undermine Iran’s influence in Syria while expanding its own, while Israel, too, aimed to counter Iran, which threatens Israel through Hezbollah in Lebanon, Syria near the Golan Heights and Hamas in Gaza. Qatar, meanwhile, wanted to bring a Sunni Islamist regime to power.

The armed groups supported by the U.S. and allies since 2011 were assembled under the banner of the Free Syrian Army. In fact, there was no single army, but rather competing armed groups with distinct backers, ideologies and goals. The fighters ranged from dissident Syrians and autonomy-seeking Kurds to Sunni jihadists backed by Saudi Arabia and Qatar.

While vast resources were devoted to overthrowing Assad, the effort ultimately failed, but not before causing massive bloodshed and displacing millions of Syrians. Many fled to Europe, fomenting Europe’s refugee crisis and a surge in political support for Europe’s anti-immigrant extreme right.

Why the failure to topple Assad 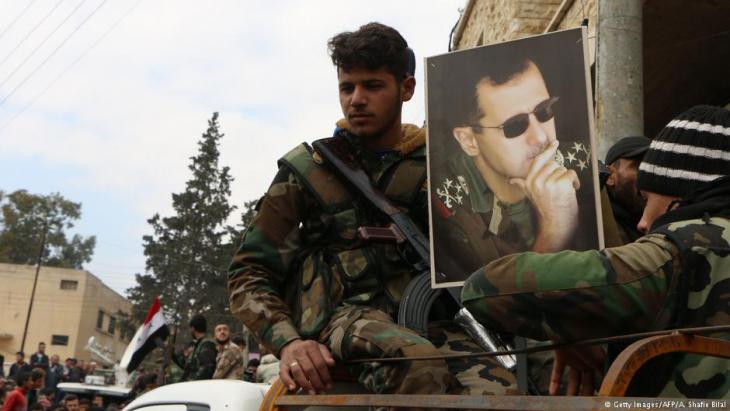 A question of priorities: "the war is at a stalemate. Only the bloodshed continues. The U.S. and its allies should face reality and accept the persistence of Assad’s regime, despicable as it may be. The UN Security Council, backed by the U.S., Russia and the other major powers, should step in with peacekeepers to restore Syrian sovereignty and urgent public services," writes Jeffrey D. Sachs

There were four main reasons for the failure to overthrow Assad. First, Assad’s regime had backing among not only Alawites, but also Syrian Christians and other minorities who feared a repressive Sunni Islamist regime. Second, the U.S.-led coalition was countered by Iran and Russia. Third, when a splinter group of jihadists split away to form the Islamic State (IS), the U.S. diverted significant resources to defeating it, rather than to toppling Assad. Finally, the anti-Assad forces have been deeply and chronically divided; for example, Turkey is in open conflict with the Kurdish fighters backed by the U.S..

All of these reasons for failure remain valid today. The war is at a stalemate. Only the bloodshed continues.

America’s official narrative has sought to conceal the scale and calamitous consequences of U.S. efforts – in defiance of international law and the UN Charter – to overthrow Assad. While the U.S. vehemently complains about Russian and Iranian influence in Syria, America and its allies have repeatedly violated Syrian sovereignty. The U.S. government mischaracterises the war as a civil war among Syrians, rather than a proxy war involving the U.S., Israel, Russia, Saudi Arabia, Iran and Qatar.

New round of escalation

In July 2017, U.S. President Donald Trump announced the end of CIA support for the Syrian rebels. In practice, though, U.S. engagement continues, though now it is apparently aimed more at weakening Assad than overthrowing him. As part of America’s continued war-making, the Pentagon announced in December that U.S. forces would remain indefinitely in Syria, ostensibly to support anti-Assad rebel forces in areas captured from IS and of course without the assent of the Syrian government. 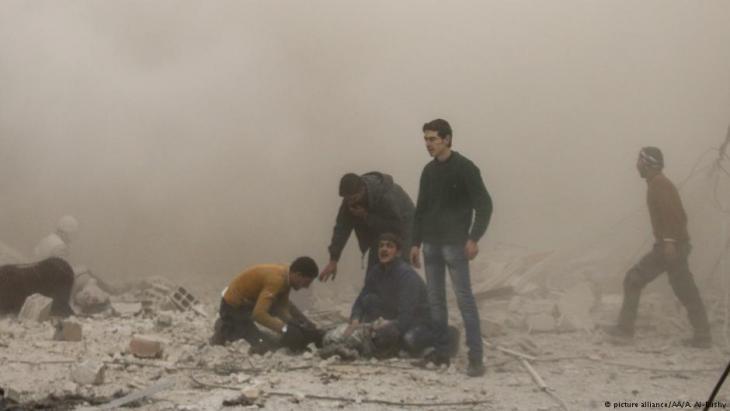 No mercy towards his own people: the Syrian army is currently pounding rebel-held East Ghouta on a daily basis. With 400,000 people under siege, the humanitarian situation is dire. When the suffering will end, no-one knows

The war is in fact at risk of a new round of escalation. When Assad’s regime recently attacked anti-Assad rebels, the U.S. coalition launched airstrikes that killed around 100 Syrian troops and an unknown number of Russian fighters. Following this show of force, U.S. Secretary of Defence Jim Mattis disingenuously stated that, ″Obviously, we are not getting engaged in the Syrian civil war.″ In addition, Israel recently attacked Iranian positions in Syria.

The U.S. and its allies should face reality and accept the persistence of Assad’s regime, despicable as it may be. The UN Security Council, backed by the U.S., Russia and the other major powers, should step in with peacekeepers to restore Syrian sovereignty and urgent public services, while blocking attempts at vengeance by the Assad regime against former rebels or their civilian supporters.

Yes, the Assad regime would remain in power and Iran and Russia would maintain their influence in Syria. But the U.S. official delusion that America can call the shots in Syria by choosing who rules and with which allies, would end.

It’s long past time for a far more realistic approach, in which the Security Council pushes Saudi Arabia, Turkey, Iran and Israel into a pragmatic peace that ends the bloodshed and allows the Syrian people to resume their lives and livelihoods.

The country's mood was already weighed down by economic and social problems and military crises before the pandemic reached Iran. The regime's crisis management has done little to ... END_OF_DOCUMENT_TOKEN_TO_BE_REPLACED

Mohammad Reza Shajarian, the great singer of Persian music, has died at the age of 80. With his passing, the world has lost an outstanding talent and consummate artist. By Stefan ... END_OF_DOCUMENT_TOKEN_TO_BE_REPLACED

The Iran-Iraq War was one of the deadliest military conflicts ever seen in the Middle East. The eight-year-long conflict, which saw the use of chemical weapons, killed thousands ... END_OF_DOCUMENT_TOKEN_TO_BE_REPLACED

A new book offers a deep insight into Iran's state media apparatus. It gives a first-hand account of the debates around the how the system positions itself – and shows how a new ... END_OF_DOCUMENT_TOKEN_TO_BE_REPLACED

The execution of wrestler Navid Afkari triggered an international outcry, as well as protests against the Iranian justice system. At the same time, it has highlighted the ... END_OF_DOCUMENT_TOKEN_TO_BE_REPLACED

Iranian director Manijeh Hekmat expected the production of her latest movie to go ahead as planned – but then she found herself having to improvise. The resulting film is more ... END_OF_DOCUMENT_TOKEN_TO_BE_REPLACED
Author:
Jeffrey D. Sachs
Date:
Mail:
Send via mail

END_OF_DOCUMENT_TOKEN_TO_BE_REPLACED
Social media
and networks
Subscribe to our
newsletter