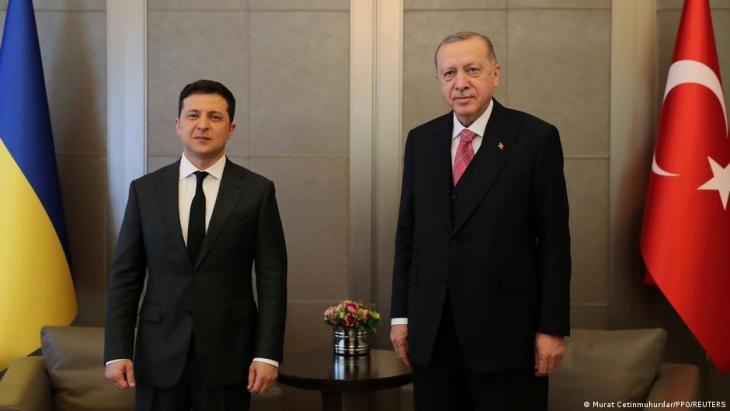 War in Ukraine
Implications for the future of EU-Turkey relations

Vladimir Putin’s war against Ukraine is a watershed event for Europe and the wider world, Tur­key included. While Ankara is trying to protect its economy and security interests, anti-Western narratives dominate the public debate, writes Sinem Adar

In the wake of the Russian invasion of Ukraine, Ankara has so far hedged its bets and protected its economy and security interests. Turkey has over the years become Ukraine’s largest foreign investor. In early February, the two countries signed a free trade agreement. Ukraine is also an impor­tant market for Turkish drones, and Ankara is eyeing Kyiv for cooperation in defense tech­nology. Meanwhile, Russia is one of Turkey’s largest trading partners for im­ports and one of its main gas suppliers. Tourism from Ukraine and Russia is a vital revenue source for a rapidly deteriorating Turkish economy. Wheat trade with both countries amounts to around 80 percent of Turkey’s imports.

Ankara is carefully trying to not antagonize Russia while continuing to militarily support Ukraine. Besides the economic burden that an open confrontation with the Kremlin might inflict on Turkey, it could also lead to military retaliation in Syria and to a subsequent migration wave from Idlib to Turkey, which hosts the largest refugee population worldwide. At the same time, the increased Russian presence in Ukraine, particularly along the coastline in the south, further raises Turkey’s strategic vulnerabil­ity in the Black Sea, accentuating its Cold War threat perceptions.

Despite what heads of state may claim, the Russian attack on Ukraine is not a wake-up call for a self-confident Europe that defends its values. The war is accelerating the decline ... END_OF_DOCUMENT_TOKEN_TO_BE_REPLACED

At the EU's outer borders, the right of migrants to a fair asylum procedure continues to be systematically disregarded. Take Greece, for example: in the worst case scenario, those ... END_OF_DOCUMENT_TOKEN_TO_BE_REPLACED

Madrid's about-face on the Western Sahara conflict has enraged Algeria. Trade relations have been frozen unilaterally and a cut in gas supplies to Europe could be in the pipeline ... END_OF_DOCUMENT_TOKEN_TO_BE_REPLACED

Mourad al-Marouai was just nine when a landmine killed him on a beach in war-torn Yemen, a tragedy that will haunt his family forever. After a swim, the little boy "suddenly ... END_OF_DOCUMENT_TOKEN_TO_BE_REPLACED

A ceasefire has been in effect in Libya for the past year and a half. Yet after Russia's attack on Ukraine, another proxy war looms in Africa's most oil-rich country. Mirco ... END_OF_DOCUMENT_TOKEN_TO_BE_REPLACED

The Ukraine war has seen energy prices spike with oil producers in the Middle East making more money than ever. But will it put the brakes on long-planned reforms to diversify oil ... END_OF_DOCUMENT_TOKEN_TO_BE_REPLACED
Date:
Mail:
Send via mail

END_OF_DOCUMENT_TOKEN_TO_BE_REPLACED
Social media
and networks
Subscribe to our
newsletter