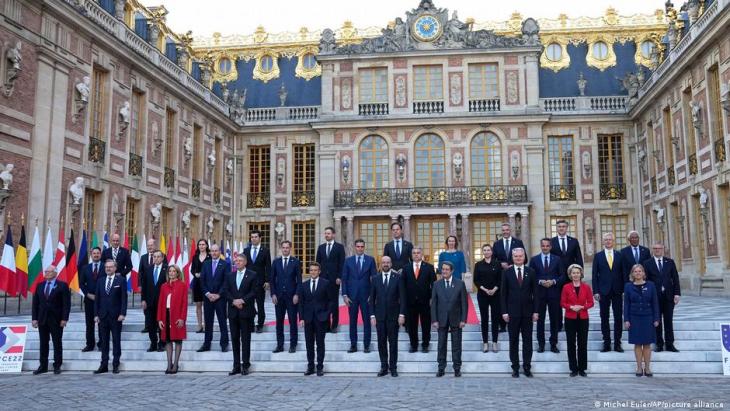 War in Ukraine
What does defending Europe mean?

Europe's double standard on refugees, exposed yet again by the war in Ukraine, is morally deaf and geopolitically dumb. Europe can only defend itself by persuading developing and emerging countries – many scarred by Western colonisation and exploitation – that it offers them better choices than Russia or China can. Commentary by Slavoj Zizek

After the Russian attack on Ukraine, the Slovene government immediately proclaimed its readiness to receive thousands of Ukrainian refugees. As a Slovene citizen, I was not only proud but also ashamed.

Russia's war on Ukraine represents a historic turning point. In recent weeks, various commentators – including Cambridge's Helen Thompson, Harvard's Kenneth Rogoff, and the American Enterprise Institute's Kori Schake – have offered exclusive analyses and predictions of what the war will mean for the global balance of power, national and regional economies, energy markets, the global financial and monetary system, nuclear proliferation and other critical issues.

After all, when Afghanistan fell to the Taliban six months ago, the same Slovene government refused to accept Afghan refugees, arguing that they should stay in their country and fight. And a couple of months ago, when thousands of refugees – mostly Iraqi Kurds – tried to enter Poland from Belarus, the Slovene government, claiming that Europe was under attack, offered military aid to support Poland’s vile effort to keep them out.

Must Europe defend itself from non-Europe?

Throughout the region, two species of refugee have emerged. A tweet by the Slovene government on 25 February clarified the distinction: "The refugees from Ukraine are coming from an environment which is in its cultural, religious, and historical sense something totally different from the environment out of which refugees from Afghanistan are coming. " After an outcry, the tweet was quickly deleted, but the obscene truth was out: Europe must defend itself from non-Europe.

Hundreds of migrants – including small children, babies and elderly people – have camped out in northwest Bosnia. The majority of them are Afghans, prepared to brave the worsening weather and tough Croatian border police for a chance to head on towards Western Europe. 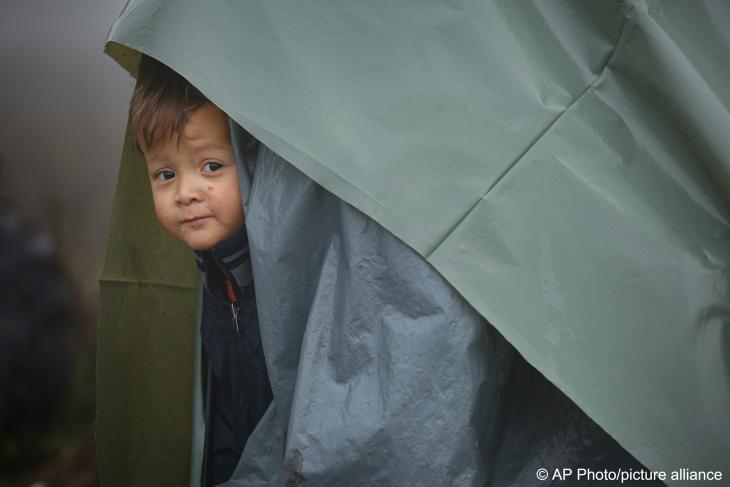 With some of the shelters no more than sticks covered by nylon sheeting, the settlement sprawls over a muddy field near the town of Velika Kladusa, a few kilometres from the border with Croatia, a European Union member 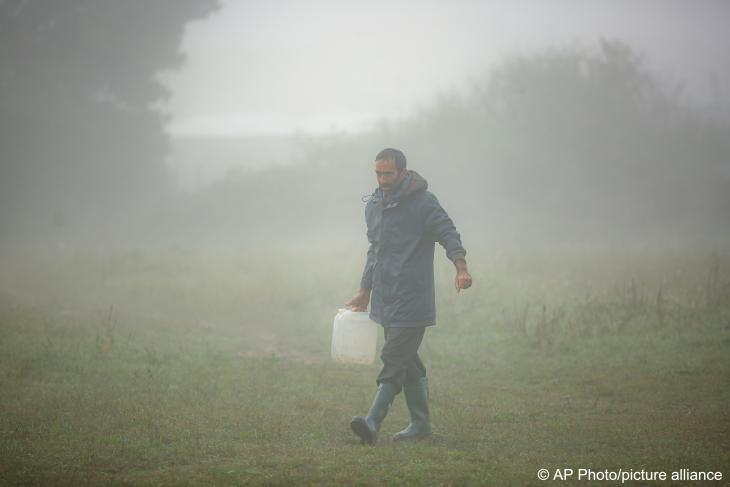 Locals say the camp has sprouted over the past few weeks. There's no running water, lavatories, showers or electricity, and a freezing Bosnian winter is fast approaching 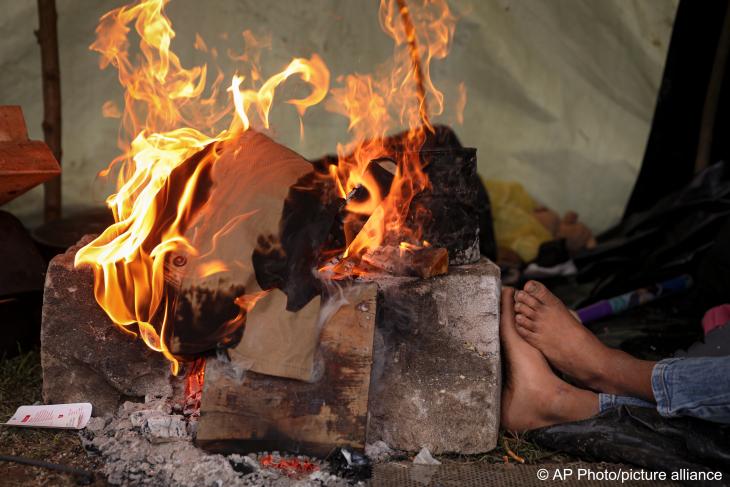 The migrants cope as best they can. They bring water in plastic containers, light fires for warmth and try to keep their tents tidy inside. Some men could be seen washing or shaving, hoping to keep clean in a sea of mud and dirt around them 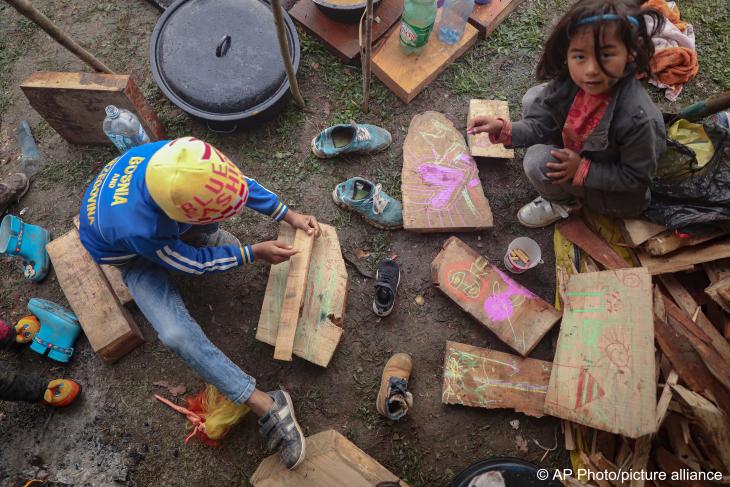 Nearby, others were chopping firewood as toddlers used sticks to draw on the ground. Some children played with plush animals or dolls, while a group of boys crouched over a game of marbles. Aid workers say the migrants refuse to move into official, organised camps so they can keep as close to the Croatian border as possible. Already, many of the children are sick, they said 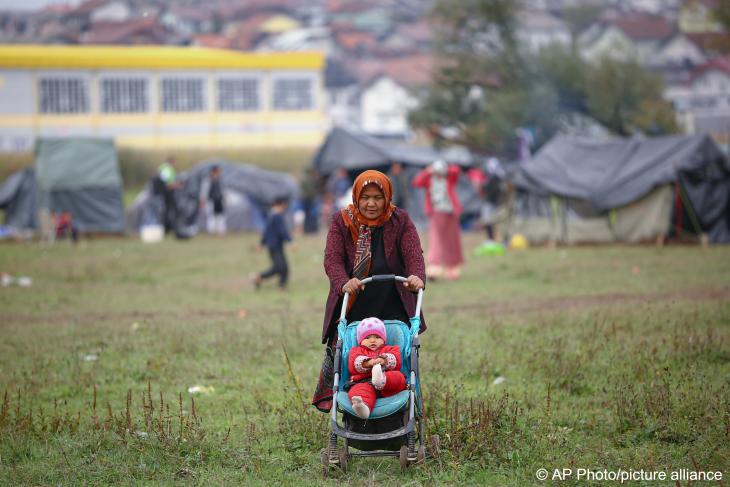 Some of the people there have tried to illegally enter Croatia dozens of times only to be turned back by Croatian police, who recently were filmed beating migrants with batons and returning them to Bosnia 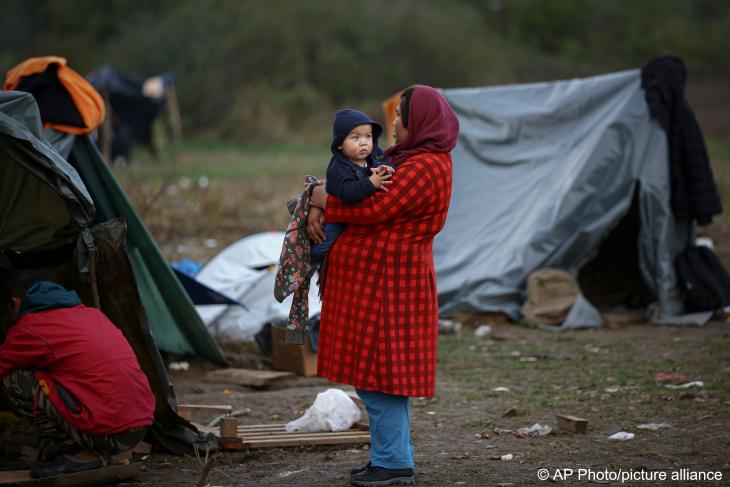 Croatia recently admitted its police were in the video footage taken under a joint effort spearheaded by the non-profit group Lighthouse Reports. Three officers have been suspended over what officials insist was an isolated incident. Croatia had repeatedly denied similar accusations in the past 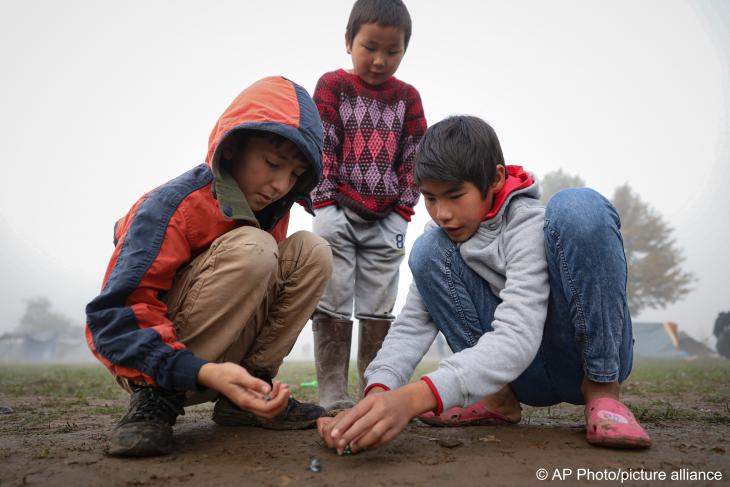 Camp resident Mohammad Romal, from Afghanistan, said he, too, was beaten by police when he was caught with a group of other migrants deep inside Croatia – heading for Italy and, ultimately, France. He said the police took their belongings and drove them back to Bosnia. "You can't talk to them, you can't say 'why you are beating us, what is the reason?'," he said 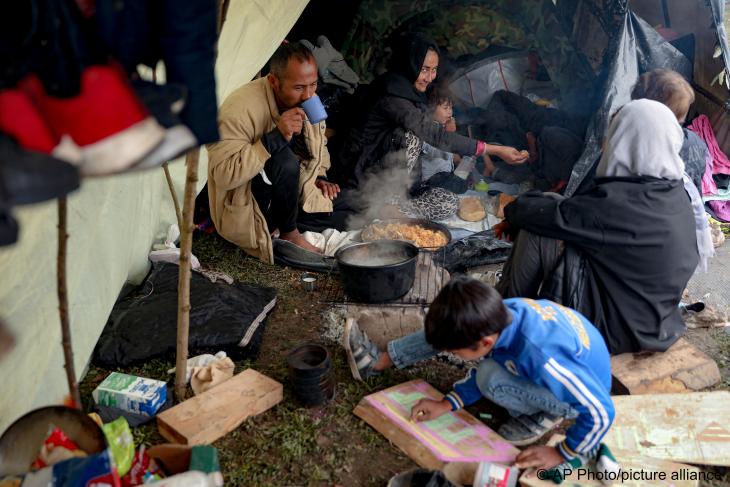 Romal's determination to build a better life for himself is shared by scores of others who fled violence and poverty in the Middle East, Africa or Asia. Thousands remain stuck in the Balkans, desperate to move on towards Europe's prosperous heartland, while many more risk their lives daily crossing the Mediterranean 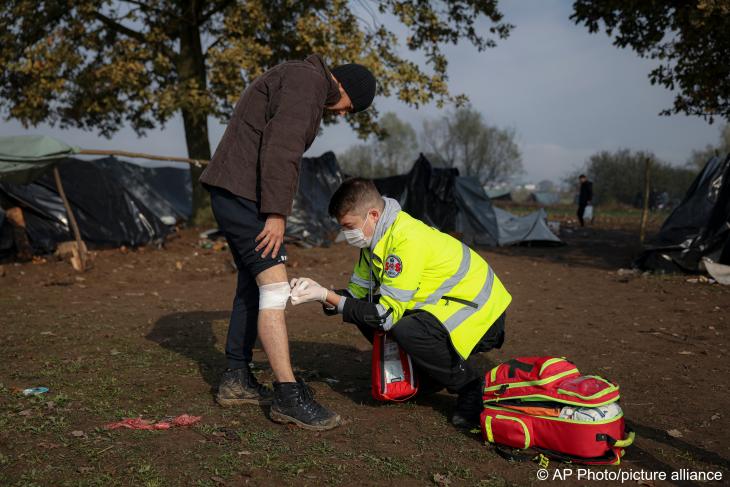 Enver Hafuric, from the SOS aid group – which was distributing medical supplies and warm meals – said appeals for parents living in the field to bring their children to official camps have failed. "They want to be closer to the border, they want to go (away) from here, they want to go to the countries of the European Union," he said

This approach will be catastrophic for Europe in the ongoing global struggle for geopolitical influence. Our media and elites frame that struggle as a conflict between a Western "liberal" sphere and a Russian "Eurasian" sphere, ignoring the much larger group of countries – in Latin America, the Middle East, Africa, and Southeast Asia – that are observing us closely.

Even China is not ready to support Russia fully, although it has its own plans. In a message to North Korean leader Kim Jong-un a day after Russia launched its invasion of Ukraine, Chinese President Xi Jinping said that China is ready to work to develop China-DPRK relations of friendship and cooperation "under a new situation". There is a fear that China will use the "new situation" to "liberate" Taiwan.

What should worry us now is that the radicalisation we see, most clearly with Russian President Vladimir Putin, is not just rhetorical. Many on the liberal left, convinced that both sides knew they could not afford a full-on war, thought Putin was bluffing when he massed troops at Ukraine’s borders.

Even when Putin described Ukrainian President Volodymyr Zelensky’s government as a "gang of drug addicts and neo-Nazis", most expected that Russia would just occupy the two breakaway "people’s republics" controlled by Kremlin-backed Russian separatists or, at most, extend the occupation to eastern Ukraine’s entire Donbas region.

And now some who call themselves leftists are blaming the West for the fact that U.S. President Joe Biden was right about Putin’s intentions. 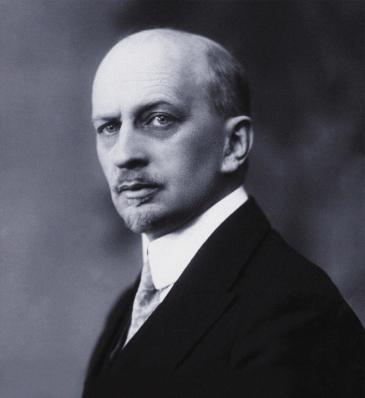 The rise of Russian fascism? "After being expelled from the Soviet Union in the early 1920s, Ilyin advocated ... the state as an organic community led by a paternal monarch, in which freedom is knowing one’s place," writes Zizek. "The purpose of voting for Putin is to express collective support for the leader, not to legitimise or choose him"

The argument is well-known: NATO was slowly encircling Russia, fomenting colour revolutions in its near-abroad and ignoring the reasonable fears of a country that had been attacked from the west in the last century.

There is, of course, an element of truth here. But saying only this is equivalent to justifying Hitler by blaming the unjust Treaty of Versailles. Worse, it concedes that big powers have the right to spheres of influence, to which all others must submit for the sake of global stability.

Putin’s assumption that international relations is a contest of great powers is reflected in his repeated claim that he had no choice but to intervene militarily in Ukraine.

Is that true? Is the problem really Ukrainian fascism? The question is better directed at Putin’s Russia. Putin’s intellectual lodestar is Ivan Ilyin, whose works are back in print and given to state apparatchiks and military conscripts.

After being expelled from the Soviet Union in the early 1920s, Ilyin advocated a Russian version of fascism: the state as an organic community led by a paternal monarch, in which freedom is knowing one’s place.

The purpose of voting for Ilyin (and for Putin) is to express collective support for the leader, not to legitimise or choose him.

“[E]very so-called truth is a matter of believing. So we believe in what we do, we believe in what we say. And that is the only way to define the truth. So we have our special Russian truth that you need to accept. If the United States does not want to start a war, you should recognise that [the] United States is not any more a unique master. And [with] the situation in Syria and Ukraine, Russia says, 'No you are not any more the boss'. That is the question of who rules the world. Only war could decide really."

But what about the people of Syria and Ukraine? Can they also choose their truth, or are they just a battlefield for would-be world rulers?

The idea that each "way of life" has its own truth is what endears Putin to right-wing populists like former U.S. President Donald Trump, who praised Russia’s invasion of Ukraine as the act of a "genius". And the feeling is mutual: When Putin talks about "denazification" in Ukraine, we should bear in mind his support for Marine le Pen’s National Rally in France, Matteo Salvini’s Lega in Italy and other actual neo-fascist movements.

The "Russian truth" is only a convenient myth to justify Putin’s imperial vision; the best way for Europe to counter it is to build bridges to developing and emerging countries, many of which have a long list of justified grievances against Western colonisation and exploitation. It’s not enough to "defend Europe". The true task is to persuade other countries that the West can offer them better choices than Russia or China can. And the only way to achieve that is to change ourselves by ruthlessly uprooting neo-colonialism, even when it comes packaged as humanitarian help.

Are we ready to prove that in defending Europe, we are fighting for freedom everywhere? Our disgraceful refusal to treat refugees equally sends the world a very different message.

Slavoj Zizek, Professor of Philosophy at the European Graduate School, is International Director of the Birkbeck Institute for the Humanities at the University of London.

Very different Western reactions to the suffering in Ukraine and the Arab world show that there is a profound rift among cultures. Essay by Michael Young END_OF_DOCUMENT_TOKEN_TO_BE_REPLACED

The documentary "Nadia" tells the incredible story of Nadia Nadim, who was forced to flee from the Taliban as a child and became a football star. By Annabelle Steffes-Halmer END_OF_DOCUMENT_TOKEN_TO_BE_REPLACED

Three award-winning female directors appeal to the international film industry to save Afghan cinema. Supporting women filmmakers is more important than ever. By Christine Lehnen END_OF_DOCUMENT_TOKEN_TO_BE_REPLACED

Russia's ranking on the World Press Freedom Index has fallen again over the Kremlin's wartime censorship of the Ukraine conflict. From Myanmar to Mexico, journalists continue to ... END_OF_DOCUMENT_TOKEN_TO_BE_REPLACED

Ideally, those Europeans currently welcoming Ukrainian refugees would show the same sympathy to Syrians, Afghans and others fleeing war beyond the continent. But, argues Ian ... END_OF_DOCUMENT_TOKEN_TO_BE_REPLACED

END_OF_DOCUMENT_TOKEN_TO_BE_REPLACED
Social media
and networks
Subscribe to our
newsletter