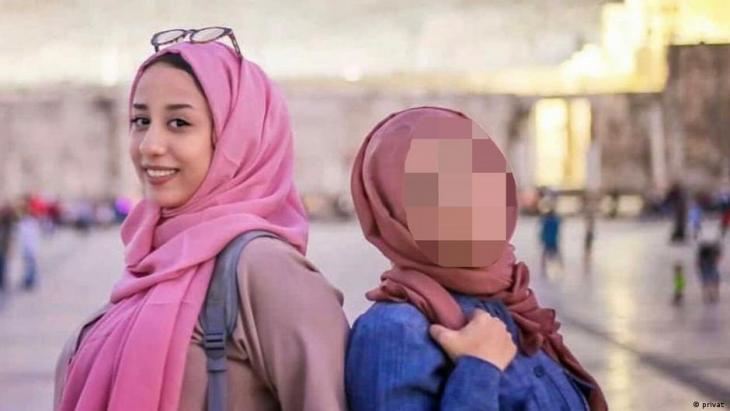 War in Yemen
Death to journalists

Journalists are under fire from all factions in the Yemen conflict. Rasha Abdullah al-Harazi, nine months pregnant, recently died in a car bomb attack in Aden, her husband barely survived. Just one of many, as Diana Hodali reports

Journalists Rasha Abdullah al-Harazi and her husband Mahmud al-Utmi were about to drive to a hospital in Aden for a check-up on Rasha's pregnancy. But as the couple got into their car, a bomb exploded. Rasha died on the spot, along with her unborn baby. Her heavily injured husband was taken to the hospital. He survived. "Rasha was such a lovely young woman, only in her mid-20s. I never thought she could become a victim of an attack," says Asma A., a good friend of the couple.

Threats from all sides

Like Mahmud al-Utmi and Rasha Abdullah al-Harazi, Asma A. is a journalist. She therefore does not want to see her real name published for security reasons. Before the car bomb, Mahmud al-Utmi used to freelance for the Emirati television station Al-Ain. Unconfirmed sources say that he had also worked for Saudi media outlets. "I still cannot fathom that Rasha was killed in such a brutal way. She only occasionally worked as a photojournalist or accompanied her husband for reports," Asma A. remembers in tears.

Yemeni journalists have been reporting on the collapse of their country since President Ali Abdullah Saleh was overthrown in the wake of the Arab uprisings in 2012. For the past seven years, a civil war has been raging in Yemen, which is fuelled by foreign powers. A coalition led by Saudi Arabia has been supporting the country's government since 2015. Saudi Arabia's arch-enemy, Iran, has been backing the opposing Houthi rebels, who now control large parts of the country – including the actual capital, Sanaa.

The majority of Yemeni government officials have moved to neighbouring Saudi Arabia. Aden, which is about 400 kilometres south of Sanaa, however, has been administered by separatists as part of a so-called Southern Transitional Council since 2020. This United Arab Emirates-backed body has repeatedly clashed with the government over control of the south. In turn, Aden has been targeted ever since the internationally recognised government of President Abed Rabbo Mansur Hadi settled there after the Houthis drove it out of Sanaa. In addition, terrorist groups such as al-Qaida or Islamic State (IS) seek to expand their influence amid the chaos. 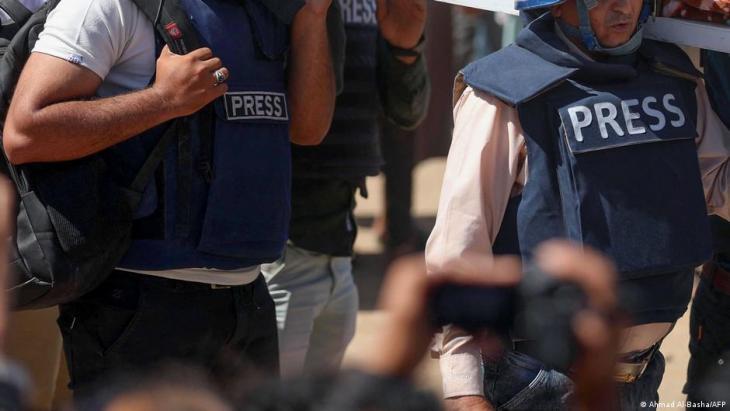 Journalists in Yemen carry a murdered colleague to the grave: journalists are often perceived as part of a conflict party and not as civilian observers, says Christopher Resch, press officer of Reporters Without Borders in Berlin. "They thus enjoy hardly any effective protection." Yemen is currently ranked 169 out of 180 on Reporters Without Borders' press freedom ranking. "Yemen's journalists are targeted by all political factions," says Asma A., a friend and colleague of murdered journalist Rasha Abdullah al-Harazi. "If you take a clear political stance in your reporting, you may as well expect to be killed or arrested"

"Yemen's journalists are targeted by all political factions," says Asma A., adding "if you take a clear political stance in your reporting, you may as well expect to be killed or arrested."

Civil war in Yemen: "Barely any protection for journalists"

"Journalists are often perceived as part of a conflict party rather than as civilian observers," said Christopher Resch, press officer for Reporters Without Borders (RSF) in Berlin, on the phone. "As a result, they experience barely any protection." Yemen currently ranks 169 out of 180 on RSF's press freedom rankings.

Mahmud al-Utmi was known for reporting critically on the Houthis. More specifically, he is said to have documented human rights abuses. He and his wife Rasha had already left Sanaa out of concern for his safety and moved to Aden. According to RSF, at least four journalists have been killed in 2021: three of them have died in an attack on a convoy of cars belonging to the governor of Aden on 10 October; Rasha was the fourth.

Moreover, numerous journalists are currently in detention. According to the New York-based Committee to Protect Journalists (CPJ), at least 19 journalists have been killed in Yemen since 2014.

"All four journalists who were killed this year have died in the Aden region," Resch said. He added that "several reports suggested that the Houthis were responsible for the acts, as they are trying to extend their power to this part of the country."

Yet, as Resch points out, it is also extremely dangerous to work as a journalist in other parts of the country, since it is not only the Houthis who torture, arrest or issue death sentences against journalists. So far, the Houthis have denied being behind the attack on the journalist couple in Aden. 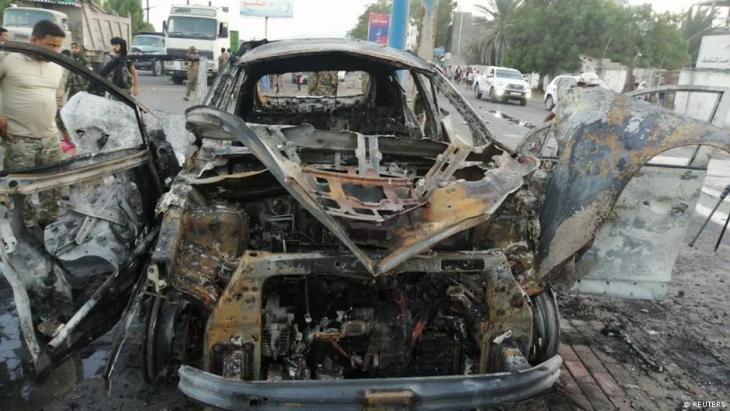 Targeted bombing of journalist Rasha Abdullah al-Harazi and her husband Mahmud al-Utmi in Aden: Al-Harazi was nine months pregnant and on her way to a check-up at the hospital. She died on the spot, her husband survived seriously injured. Mahmud al-Utmi was a freelance reporter for the Emirati television station Al-Ain, but is also said to have worked for Saudi media. His wife also worked as a journalist on and off. Many acquaintances and observers assume the attack was actually aimed at Mahmud al-Utmi, who is known for his critical reporting on the Houthis. However, it remains unclear who was responsible for the attack. All warring parties persecute and imprison journalists, the internationally recognised government, the so-called Southern Transitional Council, as well as the Houthis. Meanwhile, the Houthis have denied that they were behind the attack

Asma A., the couple's journalist friend, however, cannot let go of what happened. She, too, used to live in Sanaa where she reported for various media, including international outlets. "But eventually, I could no longer leave the house with a camera, let alone conduct interviews on the street," she said on the phone. It had become too dangerous. "I could only have worked safely with a permit. But to get it, I would have had to commit to taking sides politically. I didn't want to do that. My reports were always balanced," she said.

In addition to threats from political factions, the fighting, bombings and the poor economic and humanitarian situation exacerbate the daily work of journalists. TV stations are closing down – and those who do have work usually earn little money. For many journalists, exile is the only viable option – a decision that comes with its own challenges. After all, not all journalists are able to find work abroad, and moreover, they don't know what to expect when they return.

In the meantime, Asma A. has also left the country. "I no longer felt safe. Moreover, I could no longer bear all the suffering and misery I saw as a reporter. For years I have been reporting on death and violence. This has done something to me. I need a break to take care of my mental health."

The Yemeni journalist Mohammed A., who does not want to give his real name either, also had to leave Sanaa with his family. However, they decided to stay in Yemen. "I could no longer stand the psychological pressure in Sanaa. So many of my friends and colleagues were arrested or sentenced to death. I ended up just staying at home out of concern for our safety," he wrote in an e-mail. "The voice of freedom from Sanaa has not existed for a long time," he said.

Both, Asma A. and Mohammed A. criticise that there is no legal protection for journalists in Yemen.

Moreover, in October, the UN Human Rights Council voted against extending the mandate of the Group of Eminent Experts on Yemen (GEE). The GEE had monitored attacks and abuses in Yemen. The decision has sparked outrage among many experts as this group was considered a crucial tool for holding Yemeni parties accountable – including for potential war crimes.

"I ran out of ideas how to help journalists in Yemen," says Asma A. "In my honest opinion, all political parties are criminals as they all carry weapons, they all threaten journalists, and they restrict our work and the freedom of the press."

She would like to see Yemeni journalists receive more psychological support. Her view is echoed by RSF's Christopher Resch: "There has to be the possibility for Yemeni journalists to leave the country safely in case of an acute threat and find refuge in another country, such as Germany."

Asma A. said she doesn't know if she'll ever return to Yemen. The murder of her friend Rasha has pushed a possible return into the distant future.

Wafa′a Alsaidy, co-ordinator of Medecins du Monde in Yemen: At the expense of the Yemeni people

Saudi Arabian and UAE foreign policy: A finger in every pie

Architecture in Sanaa: Yemen's mudbrick legacy crumbles before our eyes

How is one to convey the history of Islamic images of Muhammad freed from today’s polarised politics? What are the challenges and pinch points of this particular academic ... END_OF_DOCUMENT_TOKEN_TO_BE_REPLACED

The devaluation of the Egyptian pound combined with rising food prices is taking its toll on Egypt. More and more people are slipping into poverty. Karim El-Gawhary reports from ... END_OF_DOCUMENT_TOKEN_TO_BE_REPLACED

Chinese President Xi Jinping's visit to Saudi Arabia in December 2022 may have rattled Washington, but it simply highlighted the Arabs’ desire to diversify their foreign relations ... END_OF_DOCUMENT_TOKEN_TO_BE_REPLACED

Lebanon was long viewed as the Switzerland of the Middle East. Until relatively recently, billions were deposited in its banks. Gulf states were among the foremost investors in ... END_OF_DOCUMENT_TOKEN_TO_BE_REPLACED

Protests by Western activists at the FIFA World Cup may have backfired and sparked a backlash against gay, lesbian and queer communities in Qatar, critics say. By Cathrin Schaer END_OF_DOCUMENT_TOKEN_TO_BE_REPLACED

According to a recent survey, half of all Iranians say that they have left Islam as a religion, while two-thirds believe Islamic law should be excluded from their legal system. In ... END_OF_DOCUMENT_TOKEN_TO_BE_REPLACED
Author:
Diana Hodali
Date:
Mail:
Send via mail

END_OF_DOCUMENT_TOKEN_TO_BE_REPLACED
Social media
and networks
Subscribe to our
newsletter