There is also an official body of evidence on the matter of chlorine and toxic gas. Of the 39 documented cases since 2013, the independent UN commission of inquiry says the regime was responsible; clear perpetration has not been established in the remaining six cases.

Whenever sarin was deployed in Syria, it came from regime stocks. This was revealed by matching samples with material handed over for destruction by Damascus to the Organisation for the Prohibition of Chemical Weapons (OPCW). In addition, for years the UN Commission has documented targeted attacks by the regime and its supporters on civilian infrastructure, in particular hospitals, starving out civilians as a weapon of war, as well as the systematic killing of civilians in regime detention centres.

Reports by international NGOs such as Human Rights Watch, Amnesty International and Doctors Without Borders confirm the use of these methods, which legally fall into the categories of war crimes and crimes against humanity. For this reason, international arrest warrants have been issued against Assad’s personal security adviser Ali Mamlouk and the head of the Syrian Air Force Intelligence Directorate Jamil Hassan.

But nevertheless, a growing number of "critical citizens" are assigning greater credibility to conspiracy theories on the Internet than to an UN investigation that is required to meet scientific standards. For example, in the case of the sarin gas attack on Khan Shaykhun on 4 April 2017 that left more than 80 people dead. Although following evaluation of all evidence – time of day, impact crater, air raid, victims' symptoms, blood and ground samples – the OPCW and UN team of experts holds the Syrian government responsible for the attack, other accounts still persist. 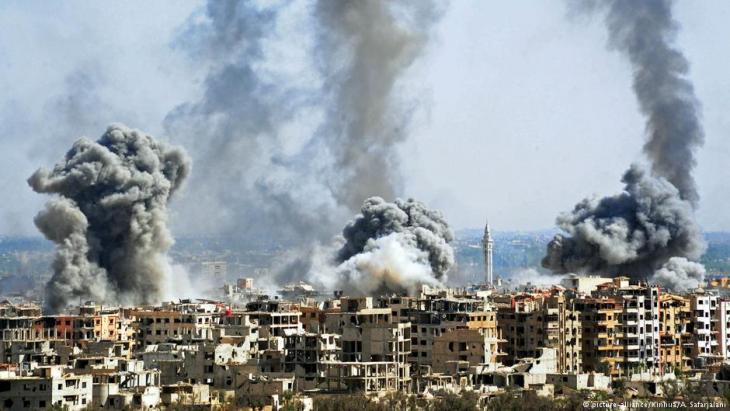 Irrefutable facts rather than fake news and "perceived truths": according to the UN Human Rights Council, poison gas was used in the Syrian city of Douma, which had long been controlled by rebels, in April 2018. According to a report published in Geneva in June on the battle for the former rebel area of Eastern Ghouta near the capital Damascus, the available evidence was consistent with the use of chlorine gas. Symptoms in the injured also pointed to the use of a further chemical

If these are supported by respected journalists or scientists, they appear all the more credible, even if these experts are basing their views on dubious sources and their claims are clearly refuted by the inquiry report. The lack of confidence in established institutions and media is evidently so great, that individual "truth finders" are feted as courageous underdogs, regardless of the garbage they spout.

The same goes for German professors who claim all chemical attacks took place "under a false flag" therefore placing them beyond the reach of scientific examination. For the disseminators of fake news, people wielding convictions like these are especially effective propaganda instruments. A scientist who believes the lies he is spreading is the best thing that can happen to Russia Today, Sputnik or Fox News. After all, his abstruse claims serve the purpose of every disinformation campaign: to sow seeds of doubt until the truth appears as one of several possible versions.

In the Syrian conflict, editorial offices that only announce the positions of the warring parties without taking the trouble to compare them with facts that can be easily researched become part of the game. Interviewing expert A in the morning and expert B in the afternoon has nothing to do with neutral reporting, but rather exposes editors' own inability to recognise fake news.

So how can we enforce truth in war? By making the distinction: we must try to understand perceptions, discuss analyses controversially, but facts must be respected – even in Syria.

This article first appeared in the taz newspaper on 17/18 November 2018.

Looking outwards with the knowledge from within: a conversation with the Iraqi writer Sinan Antoon on the future of his homeland. Interview by Lena Bopp END_OF_DOCUMENT_TOKEN_TO_BE_REPLACED

Political analyst Taqadum al-Khatib argues that Egypt can, in co-ordination with its European partners, develop a common vision to solve the complex conflict in Libya. For this to ... END_OF_DOCUMENT_TOKEN_TO_BE_REPLACED

At the suggestion of his Arab students, Israeli psychologist Ofer Grosbard created the project "Quranet", which uses texts from the Koran to solve educational problems in schools ... END_OF_DOCUMENT_TOKEN_TO_BE_REPLACED

Libyans have mixed feelings about the EU. On the one hand, they admire what Europeans have achieved, but on the other, they feel let down. Moutaz and Walid Ali report from Tripoli END_OF_DOCUMENT_TOKEN_TO_BE_REPLACED

Turkey's President Erdogan wants to create a second Bosphorus. The cost to the economy and environment would be enormous – and that's why Istanbul's mayor is attempting to stop ... END_OF_DOCUMENT_TOKEN_TO_BE_REPLACED

Libya is in turmoil and no political solution is in sight. The EU's inability to take concerted action in the country, meanwhile, is being exploited by third parties, such as ... END_OF_DOCUMENT_TOKEN_TO_BE_REPLACED