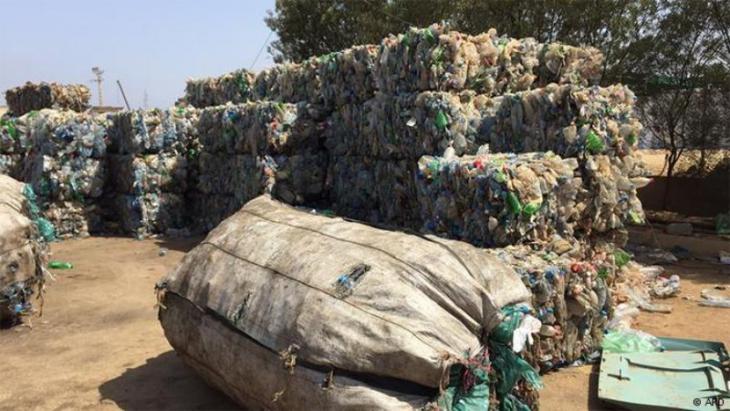 Morocco is exemplary in North Africa for its role in promoting the use of renewable energy such as wind and solar power. However, just like its neighbours, the country has a major problem with waste. A co-operative based just outside the capital has set out to change things. By Alexander Göbel in Rabat

Yassine Mazzout smiles sheepishly as he gets out of the car. The sweetish, acrid stench is amplified still more by the summer heat, but he doesn't mind. He grew up here in Akreuch, the unofficial refuse dump on the outskirts of Rabat. He toiled here for more than eight years, vying with hundreds of others for every piece of rubbish that could somehow be sold for reuse. They call them "chiffonniers": men, women and children who live from rubbish, putting their health at risk. They live either directly on the dump site, rummaging through the refuse all day long in search of something of value, or they take to the streets at night with pushcarts, picking recyclable items out of rubbish bins.

Yassine points out three large scars on his forearms. "We worked under very harsh conditions. Many people poisoned or injured themselves digging through the rubbish. One girl died before my eyes, run over by a bin lorry. Another lost three fingers. Nothing much happened to me, thank God. But there is one thing I can tell you: many risked their limbs – or their lives – at the dump."

The dumping site in Akreuch has since been closed and filled. Vegetation now grows on top of millions of tons of refuse, but plastic bags and hospital waste still peek through in many places. Iridescent brown slag seeps down into the valley. Yassine Mazzout gets back into the car. It is thanks to him that no one has to labour here anymore.

The rubbish collectors now work a few kilometres down the road, in Oum Azza. This is where a French company off-loads the refuse from Rabat on behalf of the city council. And for the past few years, Mazzout and his former rivals from the dump have devoted themselves to dealing with the influx of waste – more than 500 tonnes a day. With them, he founded the group "Attawafouk", which means "trust", on the dumping site. It is the first co-operative for waste recycling in Morocco – and still the only one in the country.

The dumped refuse is shovelled onto a metal conveyor belt and spread evenly over a drum, where biomass is separated from the rest. The residual waste then lands on further conveyer belts, where people stand and sort it further by hand. "We separate out everything we can: cardboard, plastic bottles, foil, metal," says Yassine Mazzout. "Refuse that is not organic and cannot be recycled can still be used: the cement company next door purchases the rest from us and uses it as a substitute fuel for its production. This way, we increase the percentage of waste that is reused." 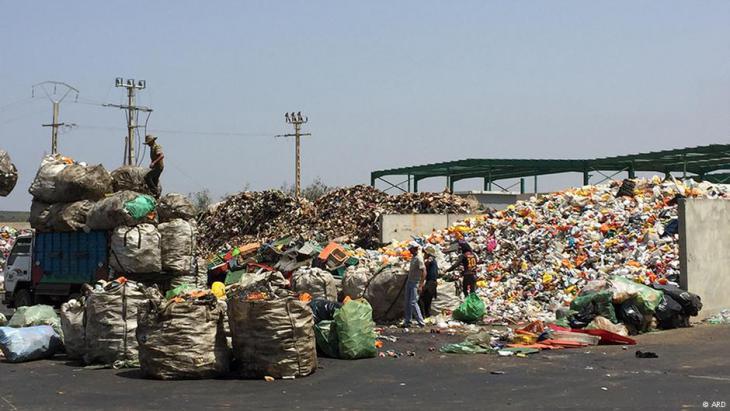 Fair and humane working conditions: "For the first time, all the hard work with the stinking rubbish is worth it. The workers no longer dress in rags but wear gloves and protective clothing and work in regulated six-hour shifts. They get paid a fixed salary, the equivalent of €250 a month, and also have health insurance," writes Alexander Göbel. Pictured here: "Attawafouk", Morocco's first and only co-operative for waste recycling

"Everyone is equal here"

The French waste disposal company financed the first machines, but the co-operative had to work hard for everything else. Attawafouk stores the sorted material, then interested companies can come and make offers. The members of the co-operative decide together to whom the recyclables should be sold, when and at what price.

"At the informal dumps, it is always the strongest who prevail. Here in the co-operative, everyone is equal. We all earn the same amount and we all have the same value as workers. There's no exception, even for me as president; I am just another member of the co-operative," says Mazzout.

Attawafouk currently turns over more than €460,000 per year with recycling. The co-operative has been able to buy a plastic press, a truck for deliveries and a bus to drive staff back and forth from work. "Things used to be so awful," says Lakbira Makroumi, who now works for the co-operative. "Outside in the dump – in the sun, in the rain, sometimes in the bitter cold. And we never knew how much money we would take home. Everything is much better now."

For the first time, all the hard work with the stinking rubbish is worth it. The workers no longer dress in rags but wear gloves and protective clothing and work in regulated six-hour shifts. They get paid a fixed salary, the equivalent of €250 a month, and also have health insurance.

Morocco made the fairly revolutionary move last summer of banishing plastic bags from supermarkets. Moreover, the privatised refuse collectors pick up rubbish quite reliably – at least in the cities. But as far as sorting waste is concerned, there's still plenty of room for improvement. Households just tip everything together into the bin, with the unofficial rubbish gatherers in the cities picking through it all. What remains lands on the dump. A large part of the valuable biomass is contaminated by items such as batteries or hospital waste, making it unusable as compost. Organic waste in turn contaminates the recyclables.

A long way to go

Yassine Mazzout fears that it will take a long time before consumers realise the need to sort their rubbish. This is due to a lack of political will. "There are also still towns in Europe where all the rubbish is mixed together like it is here. We have to find short-term and long-term strategies to deal with this issue," he says. "We need to raise awareness: from private households to large companies, from the classroom to the politicians. Maybe thirty years from now we will see rubbish being separated at source."

At any rate, the rubbish heap that the Attawafouk co-operative has to deal with is growing bigger and bigger because no one else is addressing the problem. The World Bank has expressed an interest in the project. A second recycling conveyor belt is scheduled to go into operation in a few weeks.

"I'm proud of what we have accomplished," says Mustapha Laflifla, a lean man with a friendly face and a big straw hat on his head. He is Yassine's right-hand man at the co-operative. "We work under fair and humane conditions. And I want more people to be able to work this way. We need more co-operatives like ours. We are the first, but others must follow, and we want to help make that happen. Maybe one day we will have a federation of co-operatives. Then we can put more pressure on policymakers."

The book "The Invention of the Maghreb: between Africa and the Middle East" prompts us to review basic terminology. This includes terms that we use almost every day as if they are ... END_OF_DOCUMENT_TOKEN_TO_BE_REPLACED

Morocco has taken the 2022 World Cup by storm, with the northwest Africans reaching the semi-finals for the first time in their soccer history. As the knockout match approaches, ... END_OF_DOCUMENT_TOKEN_TO_BE_REPLACED

Nouara may be 65, but she is ready to join thousands of others who burn their ID and pay traffickers for the chance of a new life in Europe. Zineb Bettayeb reports END_OF_DOCUMENT_TOKEN_TO_BE_REPLACED

When is it and when is it not acceptable to display a political banner at the World Cup in Qatar? The answer seems to depend largely on the political message, with fans ... END_OF_DOCUMENT_TOKEN_TO_BE_REPLACED

In Doha, Arabs from Morocco, Tunisia, Egypt and Algeria are gathering to celebrate the first ever FIFA World Cup to be held on Arab soil. The criticism from Europe? Over the top, ... END_OF_DOCUMENT_TOKEN_TO_BE_REPLACED
Author:
Alexander Görlach
Date:
Mail:
Send via mail

END_OF_DOCUMENT_TOKEN_TO_BE_REPLACED
Social media
and networks
Subscribe to our
newsletter