Over four-fifths of the mobilised water (82 percent) is allocated to agricultural irrigation, which accounts for only 4 percent of agricultural land. What's more, 80 percent of the water required for irrigated agriculture comes from groundwater, which is currently suffering from an alarming level of over-exploitation resulting from the proliferation of illicit drilling for water. This in turn is leading to a deterioration in the quality of groundwater resources (for example as a result of saltwater intrusion) and, consequently, soil salinisation.

The low level of sanitation coverage in rural Tunisia is responsible for the pollution of discharge environments (such as wadis) by wastewater. What's more, only 50 percent of wastewater treatment plants supply treated water that meets wastewater standards. This in turn increases the pollution of both the environment and the sea, which is the final place of discharge for domestic water.

It is important to note that when describing water scarcity in Tunisia, two major factors are overlooked: the first is that people in Tunisia not only use water from dams or from groundwater, but also from the rainwater retained by the soil for the production of rain-fed cultures and pasture lands. The second factor concerns the total demand for water in Tunisia, which is ensured by importing different agri-foodstuffs (such as wheat, sugar, etc.) and others that are not produced in the country. This (virtual) importation of water in the form of traded goods, covers one-third of the country's overall water requirements. 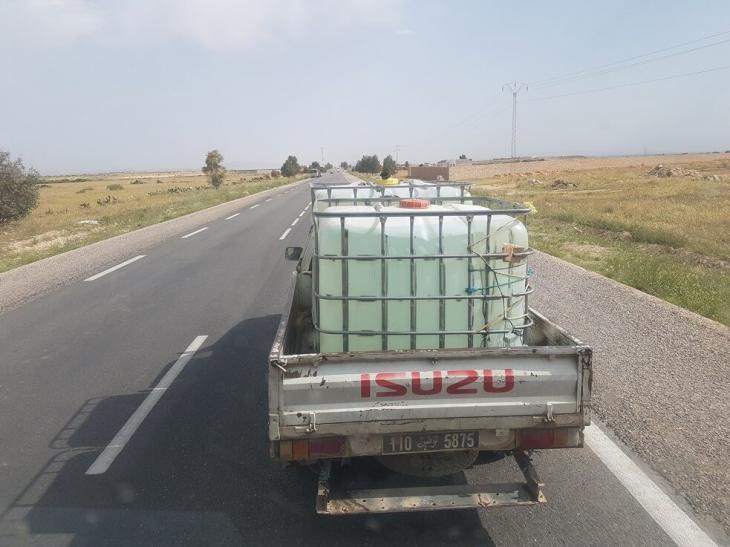 Access to water, a right or a privilege? The drop in rainfall and an increase in drought is having a drastic impact on the replenishment of groundwater reserves, the availability of drinking water, as well as on both irrigated and rainfed agriculture. This has led to illicit and illegal drilling in the public water sector and even the use of untreated wastewater for irrigation needs, the emergence of a drinking water market, and a growth in water use-related conflicts

You may also like: Environmental protection in Egypt – Did you enjoy your plastic meal today?

What's more, Tunisia's total demand for water is 65 percent higher than the world average, which points to considerable wastage at different levels of the production process. The National Institute of Consumption indicates that food waste costs each Tunisian 68 dinars a month, some 18% of all expenditure on food.

The fragility of the water situation in Tunisia and the dependence of its economy on rainwater is aggravated by the direct and indirect effects of climate change on the sectors of activity that rely heavily on water, as well as on the ecosystems that have already been weakened by anthropogenic pollution. The climate projections drawn up by the National Institute of Meteorology indicate that on the basis of an average scenario, we will see a temperature increase of over 1 degree between now and 2050 and of over 2 degrees between now and 2100, while precipitation could decrease by 20 percent between now and 2100.

Extreme weather events such as flooding, drought and heatwaves are likely to become more frequent, posing a major threat to the availability of water. In effect, the rise in temperature will result in an increase in evaporation from water reservoirs, will cause soil to dry out and will increase demand for water across all sectors.

The drop in rainfall and an increase in drought is having a drastic impact on the replenishment of groundwater reserves, the availability of drinking water, as well as on both irrigated and rainfed agriculture. This has led to illicit and illegal drilling in the public water sector and even the use of untreated wastewater for irrigation needs, the emergence of a drinking water market, and a growth in water use-related conflicts. A considerable decrease in the quality of water has been observed during periods of drought, resulting in dangerous consequences in terms of sanitation.

Resorting to the desalination of sea water in order to ensure the supply of drinking water (four desalination plants are currently under construction) is, in itself, insufficient. It is also considered a source of marine pollution, the consequences of which are very hard to control.

A plan adapted to climate change requires a reform of the management model and a renewal of the current infrastructure upstream of the production of all new water. Given that access to drinking water is a constitutional right, the priority is to safeguard this right for all Tunisians.

The sale of water at a rate that cannot cover the cost of its production is a major problem for those responsible for water supply. While holding fast to the principle that water is vital for humanity, what is needed are innovative technical and financial mechanisms to protect water, reduce food waste and install water meters that cannot be tampered with in order to monitor and check all meter readings.

Opting for a higher water rate does not prevent the government from creating a subsidy for the most vulnerable members of the population. It is also important to develop an agricultural policy that makes the most of every drop of water used in the irrigated agriculture sector, but also envisages solutions for rain-fed agriculture, which relies so heavily on the climate.

A secure water supply is a matter of national security. For this reason, it is important to place the governance of all water resources at a higher level (with the head of government or even the head of state) than that of the Ministry of Agriculture, which, being responsible for the sector with the highest water consumption, cannot itself guarantee optimum management.

Dr. Raoudha Gafrej worked for 17 years as a university lecturer and researcher in Tunis El Manar University. She is an international expert in the integrated management of water resources and climate change adaptation, and an accredited trainer in these domains.

Tourists have been returning to Tunisia, Egypt and Morocco. But, given the global uncertainty caused by the Ukraine war, will the comeback be enough to save a struggling sector, ... END_OF_DOCUMENT_TOKEN_TO_BE_REPLACED

By 2050, the Middle East and North Africa could be dealing with many more elderly people suffering from dementia. A lack of facilities, specialists and local knowledge means the ... END_OF_DOCUMENT_TOKEN_TO_BE_REPLACED

Tunisians are set to vote on a new constitution on 25 July. The prominent lawyer and women's rights activist Yosra Frawes fears the referendum could facilitate a return to ... END_OF_DOCUMENT_TOKEN_TO_BE_REPLACED

END_OF_DOCUMENT_TOKEN_TO_BE_REPLACED
Social media
and networks
Subscribe to our
newsletter