Writers from Germany and the Islamic world are brought together through an ambitious project. The Libanese Abbas Beydoun and Michael Kleeberg from Germany were the first two to meet.

The “West-Eastern Divan“ is a project for promoting and understanding of Middle-Eastern literatures in Germany and vice versa. During an initial period of three years, we will be bringing together authors – German writers meeting with colleagues from Arab Countries, Iran or Turkey – so that they may acquaint themselves not only with one other but with their respective environments. They will travel to each other’s country, give joint readings, and write about literature and the world of their counterparts, each in his or her own language.

At the end of the exchanges, writers will compose essays for publication in two books, one about German writers and one 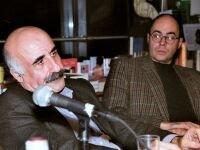 ​​about writers from the Middle East. In other words, an anthology of oriental and occidental prose – or, a West-Eastern Divan.

Because the exchanges are designed to stimulate encounters with foreign literature, literary institutions and pundits will also be involved in the project, and the writers’ texts will be prepared by experts in the field of comparative literary scholarship.

The Wissenschaftskolleg zu Berlin (Institute for Advanced Studies) is supporting the project and will organize panels and seminars within the framework of its “Cultural Mobility in Near-Eastern Literature” program, which explores the manifold relationship between the Middle East and other sectors of world literature.

The authors will read at the Berliner Festspiele, at the Haus der Kulturen der Welt/Berlin, and in other German literary and cultural centers as well as at Goethe Institutes in the various countries involved.

The results of the exchanges will be published in different media: the publishing house C. H. Beck/München will publish the two books, and WDR 3 (West German Broadcasting) will produce radio programs to accompany the project. Translations of the writers’ texts will also be made available to literary journals and newspaper literary supplements. Entries on the Middle Eastern authors will be prepared for the Kritisches Lexikon zur fremdsprachigen Gegenwartsliteratur (Critical encyclopaedia of contemporary foreign-language literature).

The project also aims at cooperation with literary scholars and institutions in the Middle East. This will be organized by the relevant Goethe Institutes, familiar as they are with the cultural terrain of the countries they are working in.

The project is headed by the Berliner Festspiele and the Wissenschafts-kolleg’s “Working Group Modernity and Islam.” Partners in the project are the Haus der Kulturen der Welt, the Goethe Institute Inter Nationes, WDR 3, the Kritisches Lexikon zur fremdsprachigen Gegenwartsliteratur, and the publishing house of C. H. Beck. Project coordinator is Thomas Hartmann.

The project in its first phase covers a period of three years (2002 through 2004) and provides for seven writer exchanges. The German Foreign Ministry has made funds available for the initial phase in the year 2002, the Kulturstiftung des Bundes (Federal Cultural Foundation of Germany) has offered its support for the following two years (2003 and 2004).

The first encounter took place in Berlin between the Lebanese lyric poet Abbas Beydoun and the German writer Michael Kleeberg. For the period of six weeks in October/November 2002 Mr. Beydoun was hosted by the Wissenschaftskolleg. Mr. Kleeberg returned the visit to Beirut in January 2003, where he gave joint readings with Mr. Beydoun. The following encounter is in March 2003 in Cairo. The young Egyptian writer Miral Al-Tahawi met her German colleague Marica Bodrozic. Mrs. Al-Tahawi replied the visit in June/July 2003 with a six week stay in Berlin. In November amd December 2003 the Lebanese writer Rashid Al-Daif and the German author Joachim Helfer will encounter in Berlin.