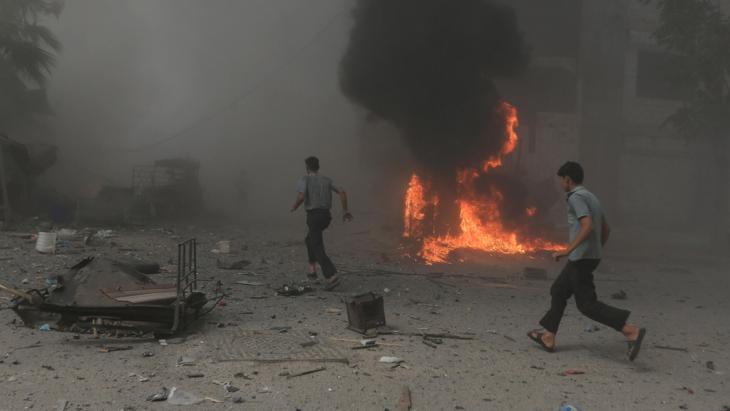 Only when the West has helped to end the war in Syria, or at least Assad's airstrikes, can it count on Syrian support in the fight against IS. To protect Syrians in their homeland, Germany in particular should be advocating no-bombing zones, says Kristin Helberg

Unfortunately, Germany's deployment in Syria is not an engagement on behalf of Syria but merely a political gesture. Following the terrorist attacks in Paris, Germany's ally France asked for help and to save rickety old Europe we Germans are complying by rushing into the breach. Without thinking about what would actually help the people in Syria, we have resolved to launch military operations, knowing full well that they will accomplish nothing. Outdated Tornadoes from the Cold War era are after all of no use in the asymmetrical battle against terrorist groups engaged in guerrilla warfare.

The upcoming operation is not only pointless; it is in fact counter-productive. Given our war rhetoric, the self-proclaimed Islamic State (IS) now feels that it is being taken seriously in its fight against the godless rest of the world. Each superpower that enters the fray only enhances its apparent menace and appeal.

The fact that Germany, spearheaded by the most powerful woman in the world – the same Angela Merkel who lures Syrians away from IS with her refugee selfies – is joining the battle plays right into the hands of IS, helping it to convince people that it's not "Angie" who is protecting the Syrians, but Caliph Abu Bakr al-Baghdadi.

Waiting for the invaders from the West

IS is awaiting the arrival of the invaders from the West in joyful anticipation. The group knows that every additional bomb in Syria only brings it more followers. For years, President Bashar al-Assad has been reliably recruiting fighters for IS by attacking the areas controlled by the opposition from the air.

According to the Syrian Network for Human Rights (SNHR), in October alone Assad's missiles targeted 14 medical facilities, six marketplaces and ten schools, while 1,438 barrel bombs were dropped randomly on residential areas. Assad is spreading terror throughout the land with impunity, forcing people to flee or driving them straight into the arms of IS. It depends on which response prevails – desperation, or anger at the ignorance of a world that makes God appear to be the only source of succour and IS the last resort.

And now even more bombs will fall. Although the American and French missiles are more precise and will be directed against IS military targets, those are few and far between. IS fighters have long since stopped driving through the desert in convoys and have concealed their armouries in residential areas. 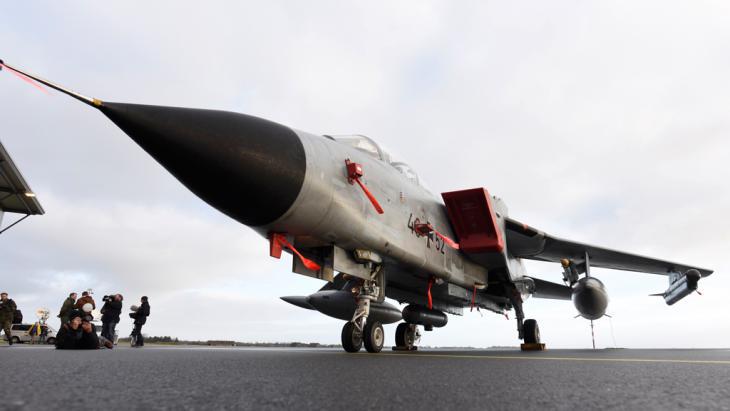 No clear aim, no strategy, no plan: "the upcoming operation is not only pointless; it is in fact counter-productive. Given our war rhetoric, the self-proclaimed Islamic State (IS) now feels that it is being taken seriously in its fight against the godless rest of the world. Each superpower that enters the fray only enhances its apparent menace and appeal", comments Kristin Helberg

Civilian deaths are hence unavoidable – especially if airstrikes are not co-ordinated with Allied fighters on the ground. Even the destruction of tank trucks, refineries or oil fields often targets the wrong victims, because Syrians can be found working there who are not committed jihadists and have only come to an arrangement with IS in order to survive.

Compared to Assad's mass murder and the number of victims of Russian bombing, the casualties attributable to the anti-IS coalition admittedly seems small. According to SNHR, the Syrian regime had killed 11,371 this year by the end of November, IS 1,382 and the US-led alliance 160. In October and November, 522 Syrian civilians died in Russian airstrikes, while the USA and France were responsible in the same period for the death of 14 people.

Just to avoid any misunderstanding: every single innocent person killed is one too many and this is true not just for the victims in Paris, but also for the Syrians. Therefore, the only military engagement that makes sense in Syria is one for the protection of civilians. For years, civil-society groups have demanded just that: no-fly zones or protected areas where people would be safe from bombing raids and the opposition could then build an alternative national order.

The Russian intervention torpedoed any such plans. Putin is assuring Assad's survival by deploying jet fighters against rebels in northwest and central Syria, protecting them with a high-tech Russian air defence system. This is precisely where a no-fly zone would be effective, normally beginning with the elimination of enemy anti-aircraft systems – but an open confrontation with Russia would then be inevitable.

Nor is anyone prepared to set up protected areas, because these are usually enforced by ground troops. Although the timetable agreed in the Vienna negotiations foresees a UN task force which is supposed to police the ceasefire that is being demanded in Syria, nothing at the moment points to a deployment of the blue helmets anytime soon.

There remains however a third, very simple way to protect civilians: a no-bombing zone. The West would agree with Russia on IS terrorist targets that should be zeroed in on, and airstrike bans would be imposed on the rest of the country. It would thus be permissible to fly over areas where IS is not present, but not to bombard them. 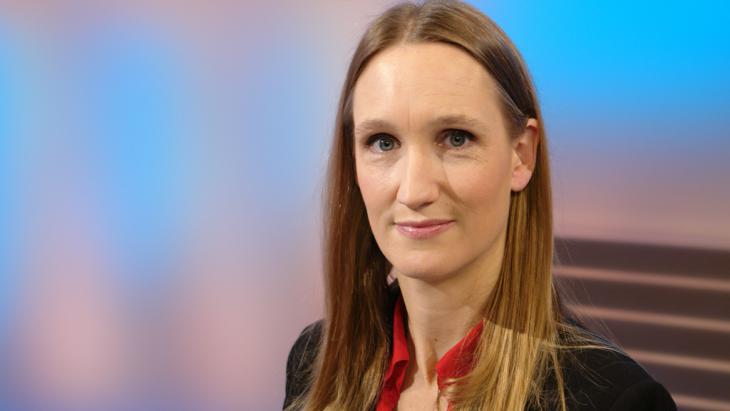 The journalist Kristin Helberg was the only officially accredited Western correspondent reporting from Syria from 2001 to 2008 on the Arab and Islamic world. Her book "Brennpunkt Syrien. Einblick in ein verschlossenes Land" was published by Herder Verlag in February 2014 in a second, updated and expanded edition

Anyone who violated these provisions would be subject to militarily reprisals, and not only through fighter jets (which could end up in the sights of air defences) but through warships in the Mediterranean. Thus, if Assad continued to send helicopters with barrel bombs to Aleppo, these would be shot down, or the military airport from which they took off could be attacked. The aim is to sanction any air attack on civilians to make sure they finally stop. Nothing more and nothing less.

This strategy of military pinpricks would accomplish a variety of purposes. First of all, the people in the ravaged provinces of Idlib, Latakia, Aleppo, Hama and Homs, and in the Damascus and Daraa suburbs, would be safer and would no longer need to flee. Secondly, a military confrontation with Russia could be avoided as the engagement would focus on the battle against IS, in consultation with the French and the Americans, so that the Russian attacks on markets, hospitals and bread factories could no longer be justified. Thirdly, Assad would come under increasing pressure and would find himself forced to negotiate politically and agree to a gradual transfer of power. This would, fourth, free up Syrian rebel groups to focus more and more on the fight against IS and allow them to cooperate, along with the Kurds, with the international coalition against IS as much-needed ground forces.

Only when we have ended the war in Syria, or at least the air attacks by Assad, can we count on the Syrians as partners in the fight against IS. And only then will Western airstrikes make any sense. In view of the number of refugees flocking to our country, Germany has the greatest interest of all in protecting Syrians in their homeland. But instead of eliminating the reasons for their flight by instituting no-bombing zones, we are sending 1,200 Bundeswehr soldiers off to Syria – without a clear goal, without a strategy, without a plan.

How are the Syrians reacting? Cynically. For years, German military action for the protection of civilians in Syria was "unthinkable", and yet now out of solidarity with France we are providing six Tornadoes and a frigate within the space of three weeks. This will cost 134 million euros – money that could otherwise be used to spare hundreds of thousands of Syrians the need to flee to Germany.

Nouara may be 65, but she is ready to join thousands of others who burn their ID and pay traffickers for the chance of a new life in Europe. Zineb Bettayeb reports END_OF_DOCUMENT_TOKEN_TO_BE_REPLACED

Education for girls and women is still possible in Afghanistan, says Reinhard Eroes of the Kinderhilfe Afghanistan initiative. In interview with Elisa Rheinheimer, he talks about ... END_OF_DOCUMENT_TOKEN_TO_BE_REPLACED

Locals in the Middle East have said European critics are showing bias and hypocrisy when they condemn Qatar. Observers agree that Qatar has had to deal with more criticism than ... END_OF_DOCUMENT_TOKEN_TO_BE_REPLACED

In Doha, Arabs from Morocco, Tunisia, Egypt and Algeria are gathering to celebrate the first ever FIFA World Cup to be held on Arab soil. The criticism from Europe? Over the top, ... END_OF_DOCUMENT_TOKEN_TO_BE_REPLACED

Canan Topcu came from Turkey to Germany as a child. In her essay, she describes how bothered she was by the racism she encountered in her country of origin when she travelled ... END_OF_DOCUMENT_TOKEN_TO_BE_REPLACED
Author:
Kristin Helberg
Date:
Mail:
Send via mail

END_OF_DOCUMENT_TOKEN_TO_BE_REPLACED
Social media
and networks
Subscribe to our
newsletter