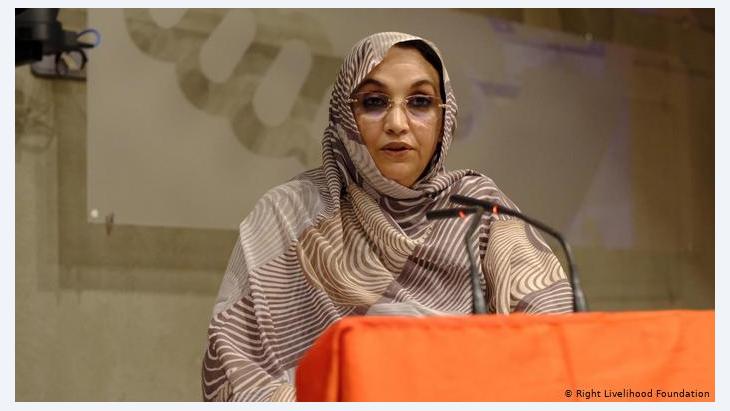 Over 30 years of peaceful campaigning for the independence of her homeland Western Sahara have earned Aminatou Haidar the byname “Sahrawi Gandhi”. Her dignity and resolve make her one of the most respected leaders among the Sahrawis.

Abandoned by its fomer colonial power, Spain, in 1975, Western Sahara was immediately annexed by Morocco. Since then, the indigenous people of Western Sahara, the Sahrawis, have repeatedly been promised the right to self-determination by the UN, Spain and Morocco. But more than 40 years have passed without a referendum being held, with the international community indifferent or even complicit in the occupation.

Aminatou Haidar started her activism as a teenager and is one of the founders of the Sahrawi human rights movement. She has organised demonstrations, documented cases of torture and carried out several hunger strikes to raise awareness about the violations suffered by her people. Haidar is the co-founder and President of the human rights organisation Collective of Sahrawi Human Rights Defenders (CODESA). She plays a crucial role in drawing international attention to the unresolved Western Sahara issue, which for long has been neglected by the UN, the EU and the media.

Since the first days of its occupation, Moroccan authorities have suppressed Sahrawis demanding the right to self-determination and respect of fundamental human rights. Like many other Sahrawi activists, Aminatou Haidar has been beaten, tortured and detained without charges or trial. She spent four years in a secret prison, isolated from the outside world.

Despite death threats and harassment, directed at herself and her two children, Aminatou Haidar tirelessly campaigns for a political solution to one of the world’s longest frozen conflicts and tries to instil the merits of non-violent action in the next generation of Sahrawis.

"The Sahrawi people have been suffering under Moroccan occupation for more than 40 years and any opposition is brutally punished. Aminatou Haidar’s courage and determination to organise non-violent resistance and speak up internationally is an inspiration for everyone who believes in justice."

END_OF_DOCUMENT_TOKEN_TO_BE_REPLACED
Social media
and networks
Subscribe to our
newsletter