How are you conducting your work now, despite the house arrest?

Khaya: Thanks to new media and communication systems, I’m in close contact with fellow activists. Despite all the technical hitches – for example, when the security forces take away my laptop and mobile – it works to a certain extent. I’m aware that the Moroccans are always listening. Even now, during this interview, we’re probably not alone. But the Internet allows me to stay in touch with the outside world.

That also serves a protective function for me. In days gone by, I’d be long dead. In early December, they came and sealed the door to the roof to stop us from getting up there for our daily flag protest. "It’s over with the roof now," they said to me. But we used stones to make a small hole in the wall and we climb out through it. No, it is not over and it will not be over.

We won’t be denied the air to breathe. The rapes, the repression – I don’t think this is down to the personal wickedness of individuals, but political calculation on the part of the occupying power. I don’t believe that the men who break in here are against me personally, but they’re only doing it to me because I’m a Sahrawi. They’re doing it to humiliate us all.

The Sahrawis have protested peacefully against the occupation for decades. Is that changing now?

Khaya: The Sahrawis have shown huge patience. Their reserves of patience haven’t been used up yet. The peaceful struggle for the land is still worthwhile. Despite the suffering and the difficulties, as a woman in the occupied territories I believe the peaceful path is the best one. But the Sahrawis on the other side, in Algerian exile, have decided to launch an armed campaign.

Sahrawis feel abandoned by the world

You’re referring to the ending of the ceasefire by the Polisario, the Sahrawi liberation movement based in the Algerian town of Tindouf, in November 2020...

Khaya: Yes, the Polisario has demonstrated that Morocco and the world can’t simply carry on as they are. The liberation fighters are still there – and they’re ready to fight.  That’s also understandable, after all 40 years of peaceful resistance have achieved nothing. The referendum promised to us Sahrawis by the UN has so far not taken place. What we need is international attention.

The United Nations must ensure that human rights are respected here – they’re trampled underfoot every day. If the international community continues to look on without taking any action, I don’t know how much longer things will remain peaceful. We feel abandoned by the world. What I’m demanding from the UN and the international community isn’t much: recognise that we’re living under an occupying power. Ensure that our human rights are respected and that we can live in dignity. 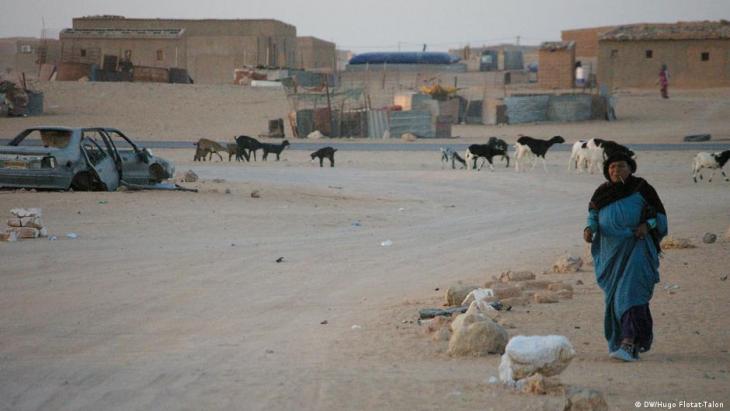 Awserd refugee camp in Algeria: Around 50,000 people live here in tents, mud barracks and brick houses. The Algerian provincial capital of Tindouf is 40 kilometres away. Also nearby are the headquarters of the Polisario Front, which for decades has been fighting for the independence of Western Sahara. Morocco annexed the former Spanish colony in 1975 and bloody civil war ensued. A ceasefire has been in place since 1991, but the conflict remains unresolved

The new German government is endeavouring to normalise relations with Morocco. If you could meet the German foreign minister, what would you say to her?

Khaya: I would say to her: please do not take part in the crimes of the occupation, in the illegal exploitation of our natural resources and the human rights violations. Normal relations with Morocco are a good thing – but not at our expense. Our demand for self-determination is legitimate. Either Germany stands on the side of justice – and that’s our side – or it stays out, but don’t support Morocco.

There’s a new United Nations Personal Envoy to the Western Sahara, Staffan de Mistura. Are you optimistic that he can make something happen?

Khaya: He will certainly do his best, just like all his predecessors. But whether he can actually do anything, is questionable. MINURSO, the UN mission to prepare for a referendum on the status of the Western Sahara, has been in place for 30 years – but it doesn’t protect us. It’s part of the problem, not the solution. The solution doesn’t lie with a person like de Mistura, but that international pressure is applied on the Moroccan occupation regime. But the latest decision by Spain to side with Morocco shows the opposite is the case.

"Spain sold our land to Morocco and Mauretania"

On 18 March, Spain performed a U-turn on its policy on Western Sahara and now supports the Moroccan plan to allow the territory to become an autonomous province under Moroccan sovereignty…

Khaya: The Spanish government’s new position surprised me less than it disappointed me. On 14 November 1975, Spain illegally sold our land to Morocco and Mauretania and deceived us. And now, in 2022, the Spanish government has done the same. The Spanish about-turn hurts me and many Sahrawis. But I’m absolutely convinced that neither Spain, nor the United States, nor any other country has the right to decide on our future. We will determine our own destiny!

What gives you the strength and hope to carry on?

Khaya: The next generation should no longer have to live as I do, confronted with torture, racism, unjust treatment. This must end. That’s what I’m fighting for – each and every day. And Sahrawi women are very patient and tenacious. It’s in our blood. Even my 86-year-old mother is still fighting. We’re standing up for what’s right. Oppressing us is wrong. I’m certain that one day, the Western Sahara will be free. Today, tomorrow or in 100 years, justice will prevail. I don’t know if I’ll be around to experience it myself, but one day it’ll happen and the thought fills me with joy.

Algeria's decision to unilaterally sever diplomatic ties with Morocco in August 2021 – days after the presidency announced in a statement their relations would be reviewed – was ... END_OF_DOCUMENT_TOKEN_TO_BE_REPLACED

Madrid's about-face on the Western Sahara conflict has enraged Algeria. Trade relations have been frozen unilaterally and a cut in gas supplies to Europe could be in the pipeline ... END_OF_DOCUMENT_TOKEN_TO_BE_REPLACED

Since Spain abandoned its traditional neutrality towards the conflict in Western Sahara, Morocco has announced a "new phase" in relations between the two countries. But what is ... END_OF_DOCUMENT_TOKEN_TO_BE_REPLACED

An increasing number of government ministries in Algeria are announcing they will abandon French in future. They may be reacting to the mood among the population, but the move is ... END_OF_DOCUMENT_TOKEN_TO_BE_REPLACED

Russia's ranking on the World Press Freedom Index has fallen again over the Kremlin's wartime censorship of the Ukraine conflict. From Myanmar to Mexico, journalists continue to ... END_OF_DOCUMENT_TOKEN_TO_BE_REPLACED

"Aboogi", on the City Slang label, is the latest release from Imarhan. Hailing from southern Algeria, Imarhan are one of the many bands that have emerged from the Tameshek ... END_OF_DOCUMENT_TOKEN_TO_BE_REPLACED
Author:
Elisa Rheinheimer
Date:
Mail:
Send via mail

END_OF_DOCUMENT_TOKEN_TO_BE_REPLACED
Social media
and networks
Subscribe to our
newsletter