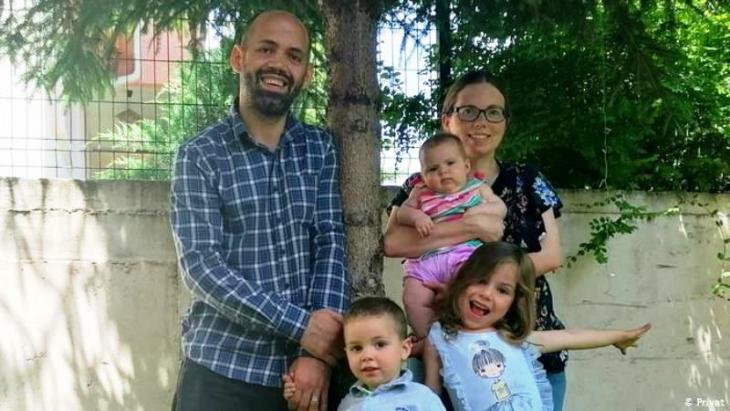 Ever since the Andrew Brunson incident, tensions have been growing between the Turkish government and the country's Christian community. Religious freedom is in jeopardy, as the Subasiguller case illustrates. By Deger Akal

For the past ten years, Joy Anna Crow Subasiguller had enjoyed a happy life in Turkey. The U.S. citizen had married a Turkish man and started a family. But then, one day, Turkey's migration department surprisingly refused to renew her residence permit – without providing any specific explanation.

"This decision makes me very sad – I love Turkey and the Turkish people," said Subasiguller. "I have lived here for ten years, they were the best years of my life," she added. She says she is a stay-at-home-mother, who poses no threat to Turkey at all.

The mother of three suspects Turkey's decision to deport her has to do with her husband, who works as a Protestant pastor in the capital Ankara. The couple plans to contest the decision in court, hoping it will reveal the real reason why Joy Anna Crow Subasiguller is now facing deportation.

He says there is evidence to suggest that Turkey wishes to deport his wife because it deems her a threat to national security and public order. This, he says, is an accusation levelled against several other members of the country's Protestant community or their spouses. But, he insists, "We are people who pray for our country, we do not threaten the national interest." 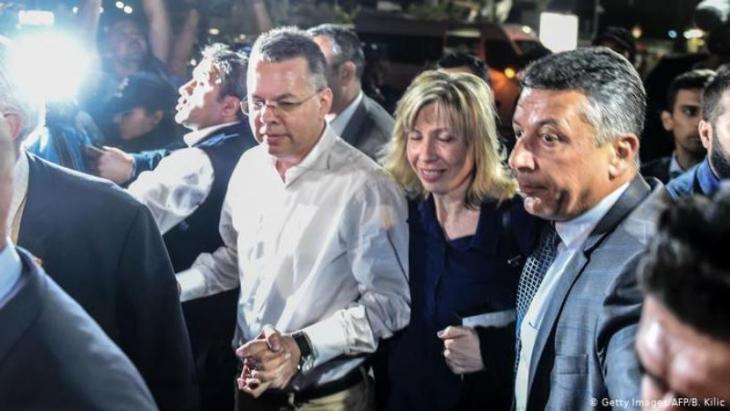 Victim of Turkey's post-2016 purges: Andrew Brunson, a Protestant pastor resident in Turkey for 23 years, was held for over a year without charge. Attending a hearing of the case in May 2018, Sandra Jolley, vice chair of the United States Commission on International religious Freedom commented, "We leave the courthouse with serious concerns. Today's eleven hours of proceedings were dominated by wild conspiracies, tortured logic, and secret witnesses, but no real evidence to speak of. Upon these rests a man's life"

Since 2019, the Turkish state has been making it increasingly difficult for Protestant foreigners, or foreign spouses of Christian Turks, to remain in the country. Members of the country's Protestant community believe the arrest of U.S. pastor Andrew Brunson by Turkish authorities partly explains this crackdown. Brunson was accused of involvement in the failed July 2016 coup against President Erdogan. Subsequently, U.S. President Donald Trump pressured Turkey to free Brunson. When Turkey refused to yield, Trump imposed tariffs on Turkish steel and aluminium imports. The sanctions have since served to exacerbate Turkey's economic crisis. Although Andrew Brunson was finally convicted by Turkish authorities on the charge of aiding terrorism, he was sentenced to time served and returned to the United States soon after.

Timur Topuz, who is the president of the Istanbul Protestant Church Foundation (IPKV), says Protestant pastors are facing growing hostility. "Since the Brunson incident, all Protestant pastors are treated with suspicion," he observes. He says there is a pattern of pastors, and their families, who are either having their residence permits revoked or not renewed. "Thirty-five pastors of the Turkish-Protestant community are experiencing problems of this kind," he notes. Since many family members are affected as well, this means some 100 members of the community are facing difficulties.

Topuz says he cannot fathom why anyone would consider the Protestant community a danger to Turkey's public order. "Pastor Carlos Madrigal, a Spaniard, has been our spiritual leader for 19 years – and has had his residence permit renewed every time by the Ministry of Labour after the state intelligence agency (MIT) gave the go-ahead," he says. Now, however, "it has not been renewed." It's a decision Topuz simply does not understand.

Topuz says he is deeply disappointed that Turkey is curtailing religious freedoms, saying that "back in 2006, our church was recognised as a place of worship, which sent a strong signal that gave us hope."

Members of Turkey's opposition have begun addressing the problem in parliament. Tuma Celik, an MP for the country's left-wing HDP, warned that the country's deportation framework violates the principle of religious freedom and threatens family cohesion. He has requested a report on how many Christian pastors have already been deported and why.

Celik, like so many others, believes this represents a structural problem. He says Turkey is reluctant to recognise other non-Muslim religions as equally legitimate faiths. This is why, he says, members of other religions are having their basic rights curtailed. He argues it is time to acknowledge that even though religious freedom exists on paper, it is not actually upheld.

Home
Print
Newsletter
More on this topic
Christians in Turkey: The Turks' fear of the missionary menaceTurkey's Aramaic Christians: Where they speak Jesus' languageThe Orthodox Christian church in Turkey: Caught in the crossfire between secularists and Islamists
Related Topics
Freedom of religion, Human rights, Justice and Development party (Turkey), Minorities in the Muslim world, Recep Tayyip Erdogan
All Topics

A broad U.S.-led effort to hold the Chinese government to international account for its abuses of largely Muslim Uighurs in Xinjiang would, at the very least, remind China that ... END_OF_DOCUMENT_TOKEN_TO_BE_REPLACED

The outpouring of solidarity worldwide following the violent death of George Floyd should prompt us to step back and fundamentally question racist structures and privileges based ... END_OF_DOCUMENT_TOKEN_TO_BE_REPLACED

The recent murder of Turkish student Pinar Gültekin by her ex-boyfriend has sparked outrage in Turkey. Women's rights activists are calling for the government to tackle the ... END_OF_DOCUMENT_TOKEN_TO_BE_REPLACED

While the government claims the new lawyers' act will be more pluralistic and democratic, lawyers believe it will harm the right to free trial and split them down political lines ... END_OF_DOCUMENT_TOKEN_TO_BE_REPLACED

The photos of the first Friday prayers in Hagia Sofia in 86 years triggered passionate and diverse responses around the world. Surrounded by a coterie of ministers, Turkey's ... END_OF_DOCUMENT_TOKEN_TO_BE_REPLACED
Author:
Deger Akal
Date:
Mail:
Send via mail

END_OF_DOCUMENT_TOKEN_TO_BE_REPLACED
Social media
and networks
Subscribe to our
newsletter