Scholars are only now beginning to realise the extent to which the Mughal emperors adopted what most would assume to be outrightly Christian devotions. An essay by William Dalrymple 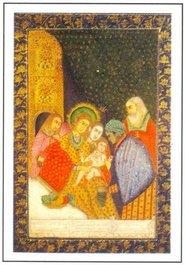 Islamic nativity scene of Jesus' birth, circa 1720, National Museum, New Delhi. In the Koran Jesus is called the Messiah, the Messenger, the Prophet, Word and Spirit of God

​​ There is a 16th-century manuscript in the British Museum which contains a painting of what – at first – looks like a traditional Nativity scene. In the middle is Mary holding the Christ child, whose arms are wrapped lovingly around his mother's neck. In the foreground, hovering nervously, are the Three Wise Men, ready to offer their gifts. So far, so conventional. But look a little closer and you begin to notice just how strange the picture is. For the wise men are dressed as Jesuits, Mary is leaning back against the bolster of a musnud, a low Indian throne, and she is attended by Mughal serving girls wearing saris and dupattas.

Moreover, the Christ child and his mother are sitting under a tree outside a wooden garden pavilion – all strictly in keeping with the convention of Islamic lore, which maintains that Jesus was born not in a stable, but in an oasis beneath a palm tree, whose branches bent down so that the Virgin could pluck fruit during her labour.

In this Koranic version of the Nativity, the Christ child, still in his swaddling clothes, sits up and addresses Mary's family with the words: "I am the servant of God. He has given me the Gospel and ordained me a prophet. His blessing is upon me wherever I go, and he has commanded me to be steadfast in prayer and to give alms to the poor as long as I shall live." The miniature illustrating this Nativity scene was one of a great number commissioned by the Mughal court under the emperors Akbar and Jehangir.

It is one of the many moments in the history of Islamo-Christian relations that defies the simplistic strictures of Samuel Huntington's "clash of civilisations" theory, for both Akbar (1542-1605) and his son Jehangir (1569-1627) were enthusiastic devotees of Jesus and his mother Mary, something they did not see as being in the least at variance with their Muslim faith or with ruling one of the most powerful Islamic empires ever to exist. 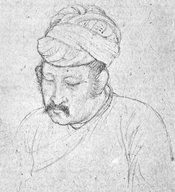 Laid the foundations for the non-denominational religious neutrality of the modern, secular Indian state: Jalaluddin Muhammad Akbar, also known as Akbar the Great (1542-1605)

Indeed, scholars are only now beginning to realise the extent to which the Mughal emperors adopted what most would assume to be outrightly Christian devotions. In 1580, Akbar began this process by inviting to his court near Agra a party of Portuguese Jesuit priests from Goa, and allowing them to set up a chapel in his palace. There they exhibited two paintings of the Madonna and Child before a large and excited crowd.

Subsequent Portuguese clerics found that the gospel books brought by their predecessors had led to murals of Christ, his mother and the Christian saints being painted on the walls not only of the palace but also on Mughal tombs and caravanserais: "[The emperor] has painted images of Christ our Lord and our Lady in various places in the palace," wrote one Jesuit father, "and there are so many saints that (...) you would say it was more like the palace of a Christian king than a Moorish one."

This unexpected Mughal enthusiasm for Christian devotions is a highly significant moment in the history of Islamo-Christian relations and one which has, of course, largely been forgotten today in the polarised world that has emerged from the Islamist attacks on America and the "War on Terror" that ensued.

"The world is a bridge, pass over it"

I first came across the Mughals' surprising veneration of Jesus and his mother 21 years ago. I remember climbing, on a bleak December morning in 1984, the great flight of steps leading to the Friday Mosque at Fatehpur Sikri in northern India. I was an 18-year-old backpacker fresh out of school, and was enjoying the sensation of disorientation. It was just before Christmas, but not only was there not a Christmas tree in sight, there was nothing remotely Christian to be seen, or so I thought. 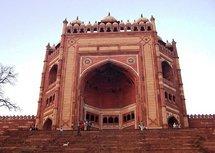 Jesus' words, adorning the mighty walls of a Muslim Emperor's walled city: the Buland Darwaza, or 'High Gate' in Fatehpur Sikri, Akbar's capital from 1571 until 1585

But when I reached the top of the steps that rose to the Buland Darwaza – the arched victory gateway leading into the principal mosque – I saw something that startled me. Here was one of the greatest pieces of Muslim architecture, but the Naskh calligraphy that lined the inside of the arch leading to the mosque read as follows: "Jesus, Son of Mary (on whom be peace) said: The World is a Bridge, pass over it, but build no houses upon it. He who hopes for a day, may hope for eternity; but the World endures but an hour. Spend it in prayer, for the rest is unseen."

The inscription was doubly surprising: not only was I taken aback to find an apparently Christian quotation given centre stage in a Muslim monument, but the inscription itself was unfamiliar. It certainly sounded like the sort of thing Jesus might have said, but did Jesus really say that the world was like a bridge? And even if he had, why would a Muslim emperor want to place such a phrase on the entrance to the main mosque in his capital city?

It was only much later, after I had lived and travelled in India and the Middle East for several years, that I began to be able to answer some of these questions. The phrase emblazoned over the gateway was, I learned, one of several hundred sayings and stories of Jesus that fill Arabic and Islamic literature. Some of these derive from the four canonical Gospels, others from now rejected early Christian texts such as the Gnostic Gospel of Thomas, others again from the wider oral Christian culture-compost of the Near East – possibly authentic sayings and stories, in other words, that Islam has retained but which western Christianity has lost.

These sayings of Jesus circulated around the Muslim world from Spain to China, and many are still familiar to educated Muslims today. They fill out and augment the profoundly reverential picture of Christ painted in the Koran where Jesus is called the Messiah, the Messenger, the Prophet, Word and Spirit of God, though – in common with some currents of heterodox Christian thought of the period – his outright divinity is questioned. There are also frequent mentions of his mother Mary who appears in no fewer than 13 surahs (chapters) and who is said to be exalted "above the women of the two [celestial and temporal] worlds" and, like Jesus, a "model" for Muslims.

Mary is in fact the only woman mentioned by her proper name in the entire Koran, and appears more often in the Koran (34 times) than she does in the Gospels, where she is mentioned only 19 times. This should not be a surprise. After all, both Islam and Christianity grew out of the same culture-compost of the late-antique Middle East, and Islam accepts much of the Old and New Testaments, and obeys the Mosaic laws about circumcision and ablutions.

"Our God and your God is one" 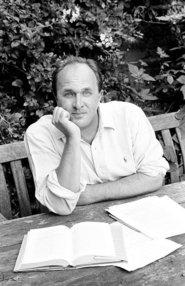 ​​Indeed, the Koran goes as far as calling Christians the "nearest in love" to Muslims, whom it instructs in Surah 29 to "dispute not with the People of the Book [that is, Jews and Christians] save in the most courteous manner ... and say, 'We believe in what has been sent down to us and what has been sent down to you; our God and your God is one, and to him we have surrendered.'"

As in the Gospels, the Jesus of Muslim tradition is seen as a healer and a miracle-worker, as well as a model of good conduct, gentleness and compassion. But he is also portrayed as the Lord of Nature, who can talk with animals and command the hills and stones to obey him. First and foremost, however, the Muslim Jesus is the patron saint of asceticism who renounces the world, lives in abandoned ruins, identifies with the poor and champions the virtues of poverty, humility and patience. In this ascetic role, he was seen across the Islamic world as a sort of Sufi grandmaster: understanding the mysteries of the heart beyond the reach of human intellect.

Love of God and one's brethren

The emperor Akbar, who founded and built Fatehpur Sikri, was particularly fond of this tradition of the Sayings of Jesus. The emperor was a Sufi mystic and believed that all existence is one, a manifestation of the underlying divine reality. Love of God and one's brethren, he believed, were more important than narrow religious affiliation. Guided by this enlightened philosophy, Akbar's rule succeeded as much through conciliation as by war. His method, which he came to as much from religious conviction as realpolitik, was to make Mughal rule acceptable to the empire's overwhelmingly non-Muslim population.

Indeed, at the same time as most of Catholic Europe – and Portuguese Goa – was given over to the Inquisition, and in Rome Giordano Bruno was being burned for heresy in the Campo dei Fiori, in Fatehpur Sikri Akbar was declaring that "no man should be interfered with on account of religion, and anyone is to be allowed to go over to a religion that pleases him". By respecting the full diversity of Indian religious beliefs, Akbar in a real sense laid the true foundations for the non-denominational religious neutrality of the modern, secular Indian state. Today, in a world as divided on religious grounds as it has ever been, the emperor's belief that different faiths could learn from each other by listening, and that listening neutrally to different faith traditions was crucial to the health of the state, is an intuition that is more important than ever – and not just in India.

Moreover, it is important to emphasise that Christianity and Islam are not nearly so far apart as both Bin Laden and Western cultural chauvinists would like us to believe. As the British Museum miniature of the Nativity under the tree shows, there are certainly big differences between the two faiths – not least the central fact, in mainstream Christianity, of Jesus's divinity. But Christmas – the ultimate celebration of Christ's humanity – is a feast which Muslims and Christians can share without reservation. At this moment, when the Christian west and Islamic east are engaged in another major confrontation, there has never been a greater need for both sides to realise what they have in common and, as in this miniature, to gather around the Christ child to pray for peace.

William Dalrymple is a British historian and travel writer. He is the author of "The White Mughals", which won the Wolfson Prize for History, and "The Last Mughal", which won the Duff Cooper Prize. His new book, "Nine Lives: In Search of the Sacred in Modern India", was published this year.

END_OF_DOCUMENT_TOKEN_TO_BE_REPLACED
Social media
and networks
Subscribe to our
newsletter