Such "threats" have also allowed Israel to continue accruing more military and diplomatic support in a bid to face up to Tehranʹs instrumental menace. Recently and in line with its stockpiling of achievements, Israel managed to secure a blessing from the U.S. for its illegal annexation of the Syrian Golan Heights, which it occupied during the Six Day War in 1967.

With the Golan no longer an issue and in order to further maximise the exploitation of the "Iranian threat", Israeli and American efforts are now gearing up to manufacture what could be termed the "Iran war process", founded on an assumed and exaggerated interest shared by the Arab Gulf states of "facing a common enemy".

It is a process that is spreading Iranophobia across the Gulf region, using the excuse of war against it to invest in a regional phalanx of targets, which includes the normalisation of relations with the Gulf States. Although proxy conflicts will be kept well-fed to nurture this fear, a fully-fledged war between Israel and Iran will most likely never happen. The process will do a better job and will continue to thrive for years to come. 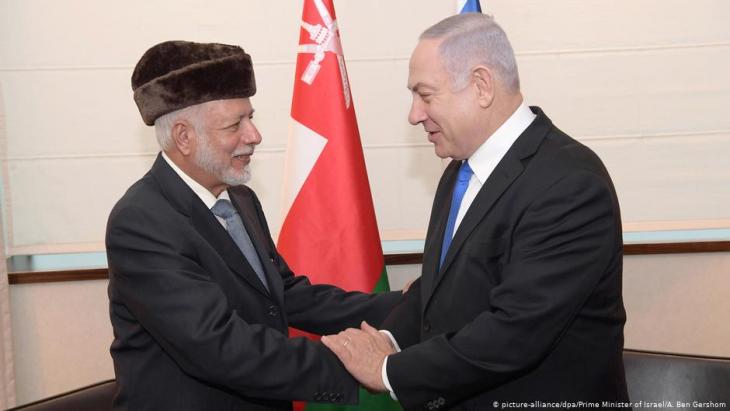 Manufacturing the "Iran war process": fomenting Iranophobia across the Gulf while working towards a normalisation of relations with the Arab states is key. While proxy conflicts will be kept well-fed to nurture this fear, a fully-fledged war between Israel and Iran will most likely never happen. The process will do a better job and will continue to thrive for years to come

Paradoxically, the "Iran war process" is also bringing significant benefits to Iran. Tehranʹs combative rhetoric against Israel is an integral part of its strategy to assert regional influence. Projecting itself as the "leader of the resistance axis", Iranʹs interventions in Iraq, Syria, Lebanon and Yemen, as well as its support of Hamas and the Islamic jihad movement in Palestine, are all justified as part of this claim to resistance.

In reality, and contrary to the pomposity of "erasing Israel", Iranʹs position on the Israel-Palestine conflict is ultimately to accept what the Palestinians would accept. In a nutshell, Iran accepts the two-state solution, much as the Arab states do, in accordance with the Arab Peace Initiative of 2002, which offered the recognition of Israel and a normalisation of relations in return for a Palestinian state along 1967 borders.

At the 2017 summit meeting of the Organisation of Islamic Co-operation in Istanbul, held in response to Trumpʹs recognition of Jerusalem as the capital of Israel, Iranʹs president Hassan Rouhani and foreign minister Javad Zarif voiced no objection to a statement issued by the meeting that called for a two-state solution.

In the face of COVID-19, we need to admit the political mistakes of recent years and adjust our trajectory according to the compass of reality. People around the world – ... END_OF_DOCUMENT_TOKEN_TO_BE_REPLACED

As COVID-19 sweeps across the globe, it is forcing religions to adapt and take action to prevent infection. But experts warn against using the crisis to fuel conspiracy theories. ... END_OF_DOCUMENT_TOKEN_TO_BE_REPLACED

Why are predominantly Muslim countries lagging behind when it comes to democracy and human rights? Dutch sociologist Ruud Koopmans uses a lot of figures to underpin his theory ... END_OF_DOCUMENT_TOKEN_TO_BE_REPLACED

The 2015 Joint Comprehensive Plan of Action with Iran is in jeopardy. European governments should use the JCPOA’s dispute-resolution mechanism both to pursue immediate measures to ... END_OF_DOCUMENT_TOKEN_TO_BE_REPLACED

Many predominantly Muslim countries have penal laws against "blasphemy", "defamation of religion" and "apostasy". In practice they serve as highly effective weapons to settle ... END_OF_DOCUMENT_TOKEN_TO_BE_REPLACED

In recent years, Tehran had pushed a clever public-relations campaign to depict Soleimani as a Napoleon- or Caesar-like warrior-poet. He was even mooted as a likely presidential ... END_OF_DOCUMENT_TOKEN_TO_BE_REPLACED

END_OF_DOCUMENT_TOKEN_TO_BE_REPLACED
Social media
and networks
Subscribe to our
newsletter