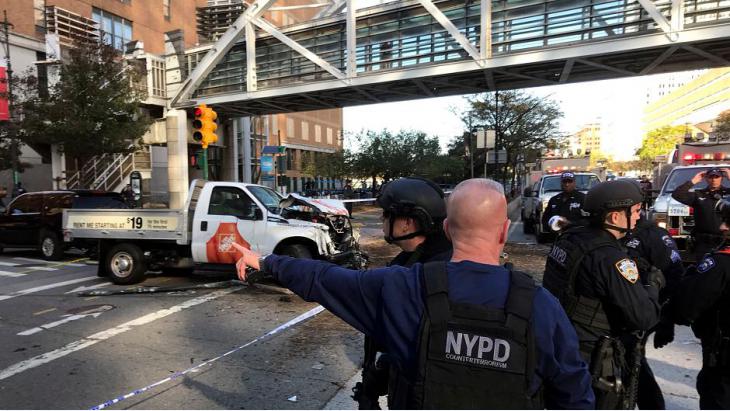 Murder on their minds

Islamist terror attacks often provoke loud, knee-jerk responses from politicians and the media alike. Yet when the attacker is not Muslim, they fall over themselves to downplay the situation. By Michael Thumann

Oh dear, Mr Trump. After the attack by an Islamist with a pick-up truck in Manhattan, he quickly came up with myriad suggestions for how to ban Muslims from entering the USA and otherwise make their lives more difficult. But after a gunman went on a rampage in Sutherland Springs, Texas, he recommended prayer.

Donald Trump has proven beyond doubt that he is a populist cynic. What else can we expect from such a man? If we look around, though, we may well notice that this brand of Trumpism is spreading. The U.S. President in fact represents a trend that has long since taken hold in Western societies: categorising attacks by Islamists and other terrorists according to a specific hierarchy.

We need only go behind the scenes at the editorial offices of German television stations or newspapers to get a glimpse of how matters stand. When the first reports of an attack run across the news tickers, some editors automatically start estimating the gravity of the situation according to an alarm hierarchy. They first ask two questions: was it an Islamist? Was it a refugee? If not, then the adrenaline level and the degree of alarm instantly drop. It might even happen that an attack already disappears from the news cycle the very next day.

Islamist assaults, by contrast, set blood to boiling: the first pages of the newspaper are freed up for the latest reports, the public broadcasters quickly schedule a prime-time news special on terrorism and so-called terrorism experts are given the floor. Politicians are then often invited to appear on talk shows to vent their outrage and call for all the useless measures that are by now well known. And as the public talk shows foster a climate not of edification but of contention, the participants gladly exchange verbal blows, in the process clarifying little to nothing. All that's left are pictures that engrave themselves in our memories.

We swallow all the stereotypes

"Violent Islamists" – how to recognise them? We all know that sinking feeling when a man with a long black beard and a large backpack or suitcase gets onto the Underground with us. And we breathe a sigh of relief as soon as he gets off again. We swallow all the stereotypes, chasing our own tails in the process. 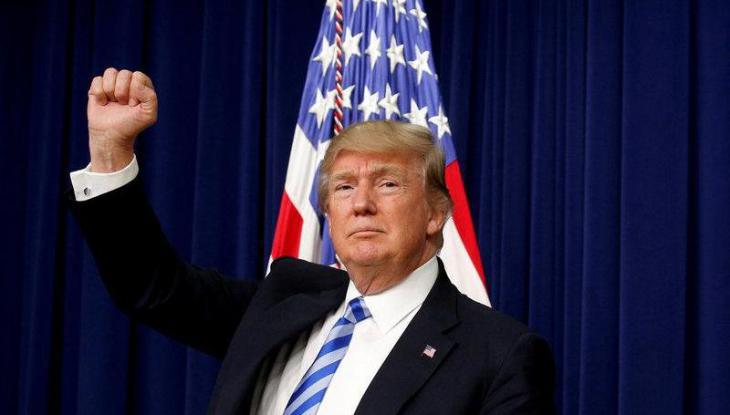 "Trumpism" on a global scale: Donald Trump has proven beyond doubt that he is a populist cynic. What else can we expect from such a man? If we look around, though, we may well notice that this brand of Trumpism is spreading. The U.S. President in fact represents a trend that has long since taken hold in Western societies: categorising attacks by Islamists and other terrorists according to a specific hierarchy

It is in truth difficult to find a way to stop a fanatic from getting behind the wheel of a truck and ploughing into a crowd. Therefore, some people dodge the issue with re-directed activities meant to somehow compensate for their helplessness. Debates arise voicing the ritual call for Muslims to finally distance themselves from terrorism. The reason this appeal is so disturbing is that it implicitly insinuates that every Muslim is a potential terrorist, that his religion has a problem.

Incidentally, the reverse reflex is just as one-dimensional, saying that "This has nothing to do with Islam." Of course it has to do with Islam when terrorists appropriate the religion for their own ends, cobbling together bits and pieces of the faith into an ideology which a frightening number of young people fall for. The fight against this phenomenon has become a generational task. Nevertheless, the teachings of Islam provide no basis for a terrorist act, despite what some Western authors have concluded in unholy unison with jihadist masterminds.

The negative impact of the media

Differentiating can prove difficult, particularly in talk shows designed to foment altercation. After an Islamist attack, participants often blithely lump everything together: terrorism, the refugees, sexual harassment of women, headscarves and of course the burka, the full-body cloak. From these ingredients, some governments then cook up policies meant to fight abuses that are statistically non-existent. The burka ban in Austria is one such solution for a problem that isn't even there.

In all our agitation over Islamist attacks, we don't notice the attacks perpetrated by others. A terrorist like Anis Amri disappeared in the crowd of migrants and refugees in order to commit the first major terrorist attack in Berlin. A refugee in Schwerin was only recently stopped from perpetrating a deadly attack.

We must not forget, however, that the majority of assaults are made on refugees and refugee shelters. In the first nine months of this year alone, there were 211 attacks on shelters for asylum seekers and refugees in Germany. Robberies, bombings, arson: in general, incidents like these do not lead to a news special or a talk show, or else we would see special reports almost every day on TV. And yet such attacks are an everyday occurrence in Germany. 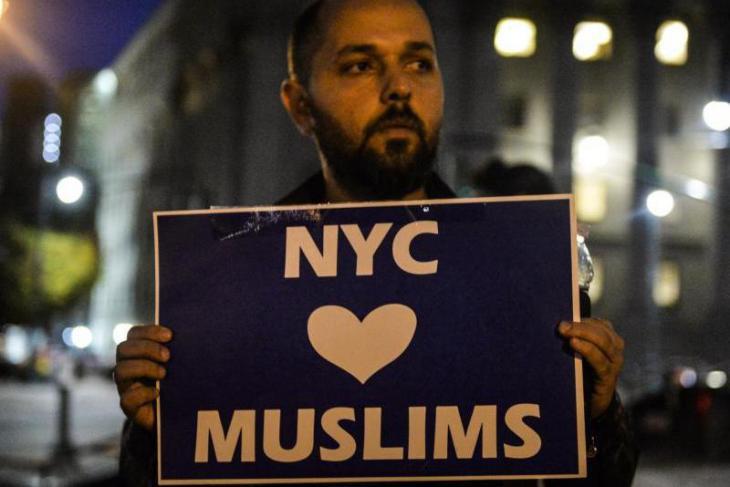 Muslims fear stigmatisation and blanket suspicion: "debates arise voicing the ritual call for Muslims to finally distance themselves from terrorism. The reason this appeal is so disturbing is that it implicitly insinuates that every Muslim is a potential terrorist, that his religion has a problem," writes Thumann

The Islamic world is the main victim

Islamist terrorism is part of a wide range of terrorisms and is – no doubt – one of the great threats of our time. Islamist attacks are therefore worthy of special reports and title pages, and also worthy of fighting with air strikes against terrorists in Iraq and Syria. The latter demonstrate compellingly that radical Islam harms first and most frequently the Islamic world itself. Terrorist groups use the Internet, the refugees and ideology to bring terrorism to Europe and to America. They have the goal of destroying the peace, the free and liberal state, not to mention the open society.

But others are also pursuing the same ends, because the open society and the liberal order have many enemies. Trump is one of them. Populist movements in Europe, nationalist authoritarian regimes in Eastern Europe and Asia – we will eventually see which form of attack is more effective in the end. The political or the terrorist.

When we consider that the terrorists do not enjoy the support of the populace, we realise just how weak Islamist terrorism really is. These offenders have no grass-roots basis except for the Internet and their own ideology. Left-wing extremists are often better networked and better able to hide among the crowds at demonstrations. Radical rightists for their part use the resentment of the people as their cover. White terrorists, gunmen and calculating killers like the one in Las Vegas are perhaps the most dangerous of all, because they have no ideology and follow no logic. They can emerge at any time from the inconspicuous realm of normality and strike without warning.

That's why it is so crazy that the USA goes on waging the same old debates after every assault. There are no consequences, though, because rational conclusions can simply not be drawn from this kind of ideological trench warfare. And all the while, it has been proven time and again that many weapons in the population lead to many attacks on the population.

For the victims, Islamist terrorism is no worse or horrific than the white variety. They both have something in common: the perpetrators want to kill as many people as possible, thereby creating the greatest shockwave. But the alarm hierarchy in many media also sorts the victims. It's high time we ended this practice. 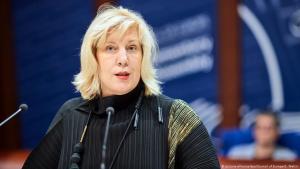 Protecting the truth from deniers and serving justice for victims of the Srebrenica genocide is our best bet to prevent genocides from occurring again, writes Council of Europe ... END_OF_DOCUMENT_TOKEN_TO_BE_REPLACED

Twelve million Syrians are dependent on humanitarian aid, a sombre figure that conceals much suffering and high costs, of which Europe bears 80%. With an aid shortfall looming, ... END_OF_DOCUMENT_TOKEN_TO_BE_REPLACED

Mikhal Dekel’s father was part of a contingent of Jewish children who went on an odyssey from Poland to Iran as a result of the Holocaust. Dekel has now written a book exploring ... END_OF_DOCUMENT_TOKEN_TO_BE_REPLACED

The protests against police violence in the USA have triggered a discussion in Germany about discrimination, immigration and the country's image of itself. Why are people who do ... END_OF_DOCUMENT_TOKEN_TO_BE_REPLACED

In the age of corona, Ankara's regional power strategy is twofold: on the one hand, Turkey is engaged in a charm offensive to revamp its political image, which has suffered lately ... END_OF_DOCUMENT_TOKEN_TO_BE_REPLACED

END_OF_DOCUMENT_TOKEN_TO_BE_REPLACED
Social media
and networks
Subscribe to our
newsletter