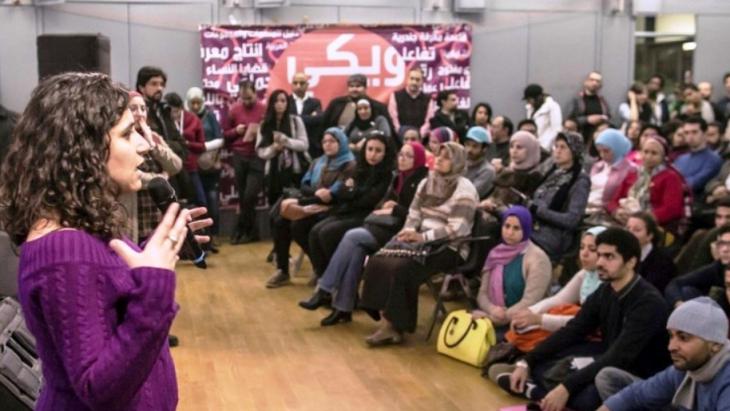 "Wiki Gender" is a collectively-run Internet lexicon. The activists behind it hope to create a digital and participatory knowledge platform that not only provides freely accessible information to the public, but above all serves to initiate discourse. By Sofian Philip Naceur

Is it possible for a single online platform to initiate discourse, generate knowledge and make it publically available, all the while promoting an exchange of experience? Yes, it is. At least this is the hope of the team behind the recently launched online lexicon Wiki Gender, which was presented to an interested public at the Goethe-Institut in Cairo last December during the official project presentation. The goals of the project are ambitious, yet due to the glaring lack of generally accessible information on gender-relevant issues in the Arabic language, are they by no means unrealistic.

"We want the wiki to include every single word on the topic of women and gender, such as those found in gender studies, definitions and documents written in Arabic. Basically we want to make them a freely accessible source so that people can read them, learn from them and increase their knowledge," explains Habiba Mohamed Montasser, a member of the group. One of the most important goals, however, is that people use the platform to exchange experiences and initiate discourse, says the 26-year-old activist from Cairo, who has been working on the project together with a dozen other activists since late 2014.

Designing an open platform and filling it with content

The idea to design the platform as a wiki only came about a year ago. The project began as an informal exchange and discussion group that met at irregular intervals, says Montasser. "We originally wanted to bring together organisations dealing with gender issues, not only so that they would get to know each other better, but also to faciliate the exchange of information and experience among them."

According to Montasser, the second step was to make these organisations better known to Egyptians. "We wanted to launch a website, but when the Arab Digital Expression Foundation (ADEF) joined the project, we had the idea of not only setting up a simple website, but making it an open platform."

A wiki proved to be the best solution for this purpose, says Ahmad Gharbeia, technical consultant with the ADEF who has been active with the organisation since 2008. The ADEF is primarily focused on issues of information and communication technologies and organises summer camps for young people and other educational events.

"Wiki Gender" made in Egypt. Although they had been working on the project for quite some time, it was only in early 2016 that Habiba Mohamed Montasser and the other activists working on the project began filling the platform with content. Today, it contains the profiles of 40 organisations including HarassMap

This makes the organisation, which is based in Moqattam in the east of Cairo, the perfect partner for setting up a wiki on issues relating to the topic of women and gender. Since December 2015, staff with the ADEF have organised a number of workshops conveying the necessary technical expertise to set up and run such a wiki.

It was only in late 2016 that Montasser and her fellow activists began filling the completely designed platform with content. Today, it includes profiles of organisations such as HarassMap, which works to combat violence against women. The site already hosts a total of 40 organisations. "We also want to compile information about groups and initiatives that no longer exist because we do not want this information to be lost," says Montasser. The site will not, however, be limited to the profiles of organisations or initiatives that often only operate in social networks.

Enabling discussions in the Arabic language

Another goal of the project is to continuously collect and make freely available information on topics related to gender issues. The hope of the Goethe-Institut is that the project will contribute to the promotion of discourse and education on gender issues in Egypt and other countries.

"The original idea was simply to publish a directory for gender-relevant organisations, but it quickly became apparent that this approach would result in many things remaining invisible or getting lost. This is why it was decided to open up the project and to offer a platform both to produce and disseminate knowledge on gender issues," says Johanna Ullmann, project coordinator for gender and educational projects at the Goethe-Institut in Cairo. The main focus is to generate knowledge and debate on issues of gender, gender equality and equal rights in Arabic.

In fact, the linguistic focus was a key motivation behind Wiki Gender. It is difficult to grapple with these issues in the region, because although information is freely available in English, it is not in Arabic, explains Montasser. This is another reason why the project would like people to join the wiki team.

"We want more people to become involved in our wiki project, to publish their information here, thereby allowing for greater discussion," says the young activist. As such, the main goal of the opening event was to encourage people to participate. Interest in the project turned out to be considerably greater than expected. The event hall of the Goethe-Institut in Doqqi was bursting at the seams for the launch of Wiki Gender.

"The four most important goals of the project are the collection and generation of knowledge, the monitoring and documentation of initiatives, groups, projects, and activities, networking and the exchange of information, and the fostering of discussions and interaction on the Wiki, as well as on other platforms and forums," writes Sofian Philip Naceur

Interested visitors had ample time to spend at the various information stands at the event's "open corner" to find out about the project and to explore the existing website. The introductory presentation was considered to be the official kick-off of Wiki Gender.

The four most important goals of the project are the collection and generation of knowledge, the monitoring and documentation of initiatives, groups, projects and activities, networking and the exchange of information, and the fostering of discussions and interaction on the Wiki, as well as on other platforms and forums.

A collective and collaborative experience

The contribution made by the ADEF was especially important in the realisation of this open and participatory concept. The idea of a wiki, in particular, made it all possible, explains Gharbeia. "A wiki is a combination of technological methods and collective publishing on the Internet. It motivates and encourages people to make a contribution to a certain project – in our case a wiki on the topic of gender – thereby increasing the level of knowledge in this field," says Gharbeia.

The most prominent example of this is Wikipedia, which started over 15 years ago as a small online lexicon and quickly grew. "The underlying concept also implies that those participating are interested in the topic and would like to actively participate, while at the same time being able to accept criticism. It is a kind of collaborative experience for people who like to work on something together," he explains.

Also interesting is the basic wiki concept of transparency, that every article begins with a few lines, develops, mutates and gradually becomes cross-linked. There is no editorial room, as everything takes place in the open, so that the debates and progress behind every single text can be traced back.

This is also why Ullmann describes the project as a very complex collective exercise in discourse taking place in the Arabic language and which should continue to develop. The greatest challenge currently facing the project is to be effective outside of the major urban centres in Egypt. Until now, the main focus of Wiki Gender has been in the capital Cairo.

Political analyst Taqadum al-Khatib argues that Egypt can, in co-ordination with its European partners, develop a common vision to solve the complex conflict in Libya. For this to ... END_OF_DOCUMENT_TOKEN_TO_BE_REPLACED

The upheavals of the past year in the MENA region are arguably as momentous as those of the Arab Spring in 2011. Yet perhaps the biggest difference is that our interest seems to ... END_OF_DOCUMENT_TOKEN_TO_BE_REPLACED

In 2019, the long-running Penguin Classics series released its first novel translated from Arabic: Tawfiq al-Hakim’s "Return of the Spirit", conveyed into English by William ... END_OF_DOCUMENT_TOKEN_TO_BE_REPLACED

Equality in divorce, a ban on polygamy: reformers of Islamic family law have a clear agenda. They are exploiting the ambiguity of traditional jurisprudence. By Joseph Croitoru END_OF_DOCUMENT_TOKEN_TO_BE_REPLACED