The violent death of Jina Mahsa Amini in September has triggered the largest protest movement in decades against the repressive rule in the Islamic Republic. The Iranian state has reacted with full force. 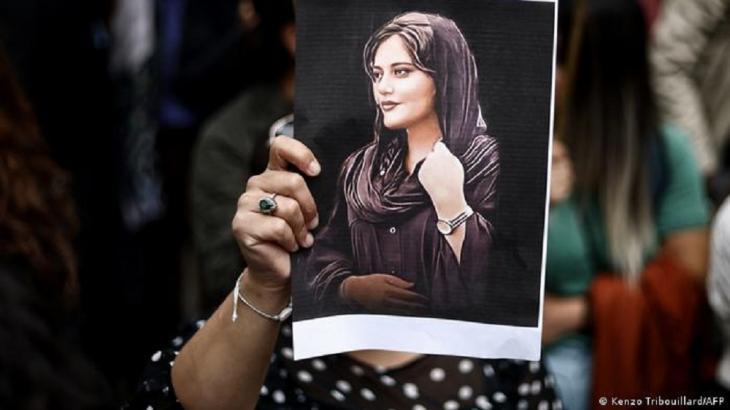 Face of a revolution: on 13 September 2022, Jina Mahsa Amini was arrested by the morality police in the Iranian capital, Tehran, allegedly because her clothes and headscarf did not comply with the official rules of the Islamic Republic. Three days later, the 22-year-old Kurdish woman died in the custody of the security authorities. Her death triggered an uprising across the country. 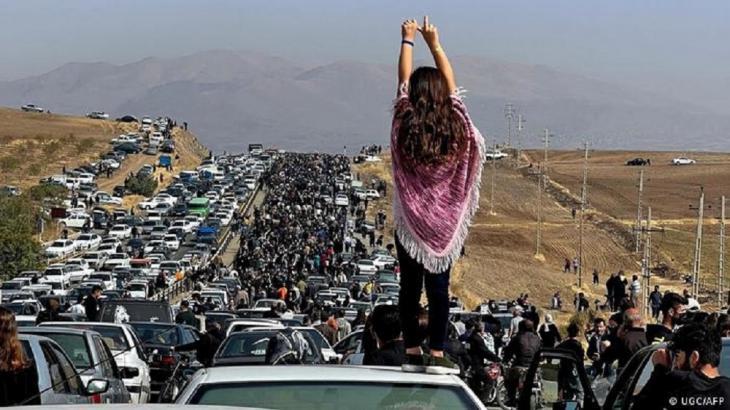 "Woman, life, freedom!" On 17 September, the uprising against the regime began at Amini's funeral in her Kurdish hometown of Saqqez: women removed their headscarves, waved them in the air and shouted "Jin, jiyan, azadi!" – in English, "Woman, life, freedom!" The call became the slogan of the growing protest movement. On 26 October, thousands came to Aichi cemetery to mark 40 days since Amini's death, as seen here. 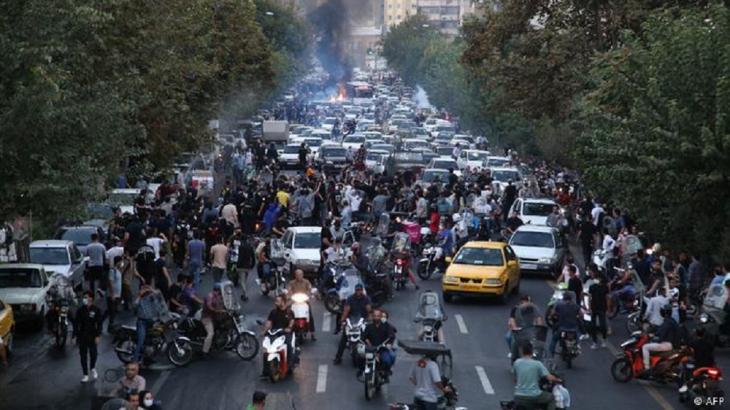 Historic uprising against the ayatollahs: Amini's death marked the beginning of an historic movement. The protests against the repressive government have shaken all regions of the country, like here in Tehran at the end of September. And they haven't been limited to women – people of all ages, ethnicity and gender have taken part. It's the biggest uprising in Iran since the Islamic Revolution in 1979. 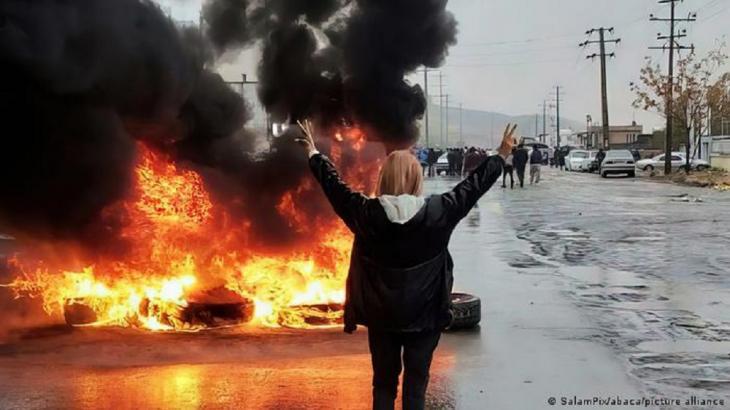 Without hijab and without fear: over the past three months, more and more women in the Kurdish city of Sanandaj, in western Iran, have been taking to the streets without the obligatory hijab. They have shown great courage, as anyone who violates the compulsory veil risks lashes and imprisonment. 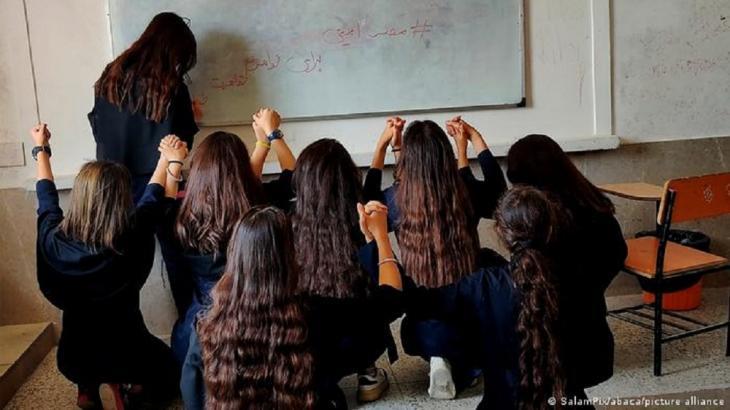 Showing hair and attitude: despite the threat, women and girls have not been intimidated. In October, these schoolgirls took off their headscarves and shouted "Death to the dictator!" – meaning Supreme Leader Ayatollah Ali Khamenei. Universities saw mass protests, and students, teachers and also oil workers took part in strikes across the country. The Kurdistan region was the scene of a general strike in early December. 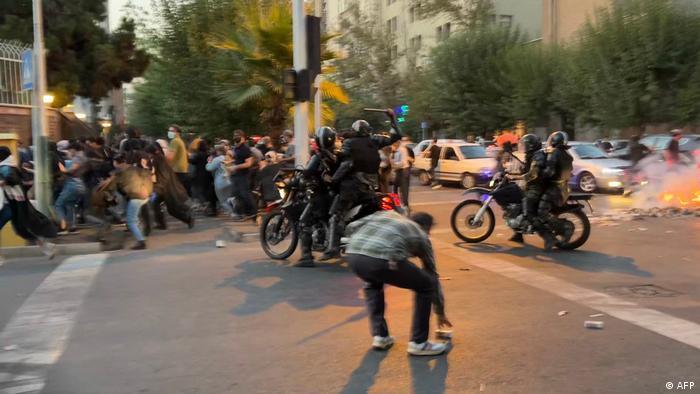 The regime reacts with violence: in an attempt to quash the movement, the regime has reacted with massive violence. Police and the notorious Basij paramilitary group have been sent in to break up the protests – here, police in Tehran approached a group of fleeing demonstrators with batons. Human rights organisations have estimated that more than 400 people have been killed by security forces, including many children and young people. 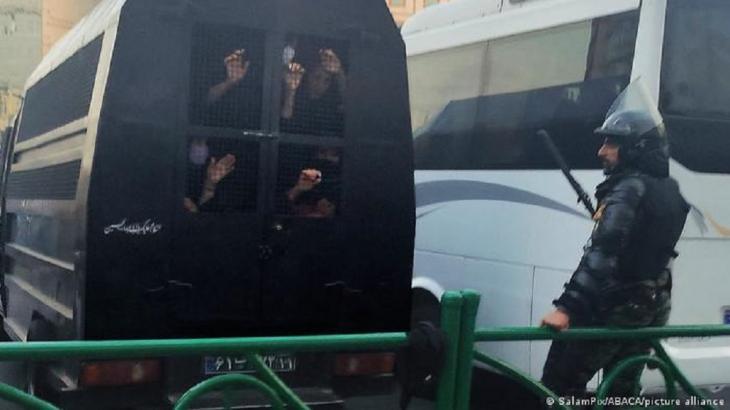 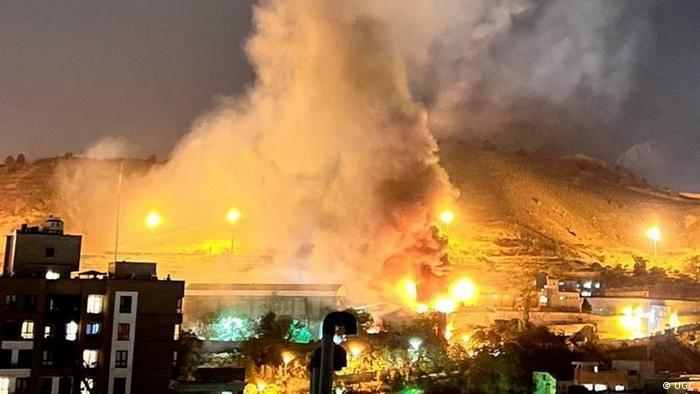 Prisons filling up: the notorious Evin Prison in Tehran has become a symbol of repression. Political and intellectual opposition figures are being locked up here, made to survive catastrophic conditions including reported torture. In mid-October, a fire broke out at the prison and witnesses reported hearing gunfire. It remains unclear how many prisoners died or simply disappeared. 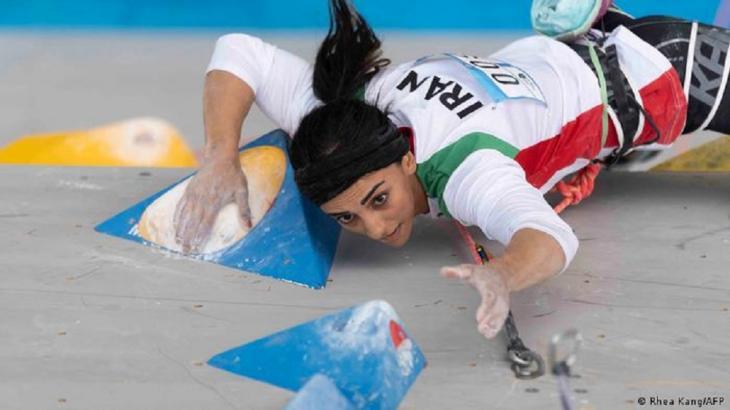 Climbing without a headscarf: prominent figures from the arts, culture and sports have also taken part in the protests. At the FIFA World Cup in Qatar, the national football team refused to sing the Iranian national anthem at their opening match. When climber Elnaz Rekabi, above, competed in Seoul without a hijab, the pictures made headlines around the world. However, she was quickly silenced and issued an apology. 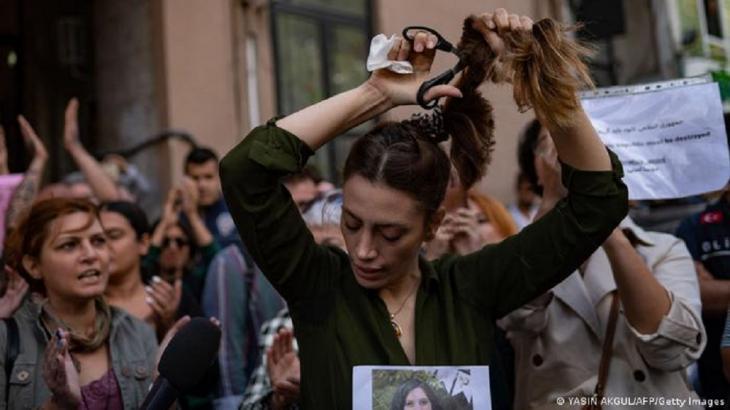 Cutting their hair: the protest movement has received support from around the world, with thousands demonstrating from Paris to San Francisco for regime change in Tehran. In Istanbul, this exiled Iranian woman cut short her hair in front of the Iranian consulate in solidarity with the oppressed women in her home country. Prominent women – and some men – have imitated the gesture worldwide. 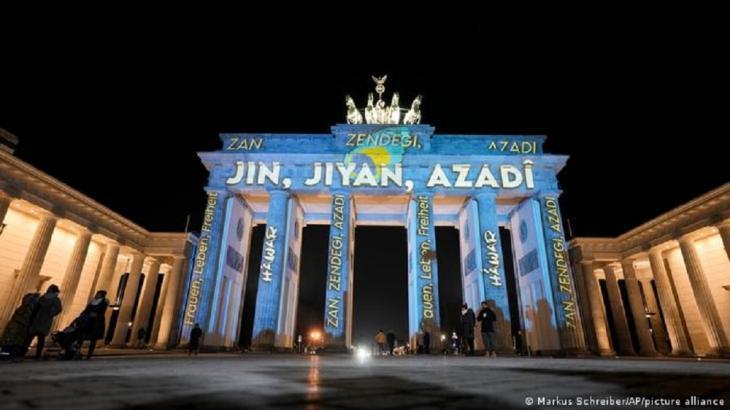 Symbolic support: the global support hasn't just been in the form of protests. On 13 December 2022, the Brandenburg Gate in Berlin was illuminated with the Kurdish words "Woman, life, freedom." In the United States, "Time" magazine named Iranian women its "Heroes of the Year". 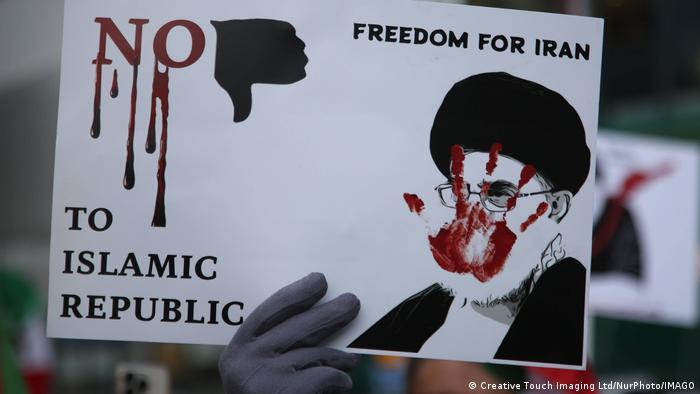 "No to the Islamic Republic": the worldwide protests – here a demonstration in Toronto – have put pressure on the government in Tehran. Additional sanctions are putting a massive strain on the country's economy. The exchange rate of the rial has fallen by more than 20 per cent against the euro and dollar since September, hitting a record low. Even before the demonstrations began, the country was suffering an acute financial crisis. 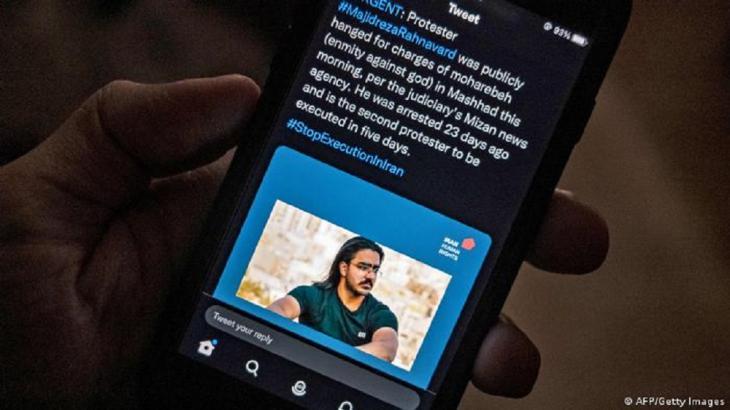 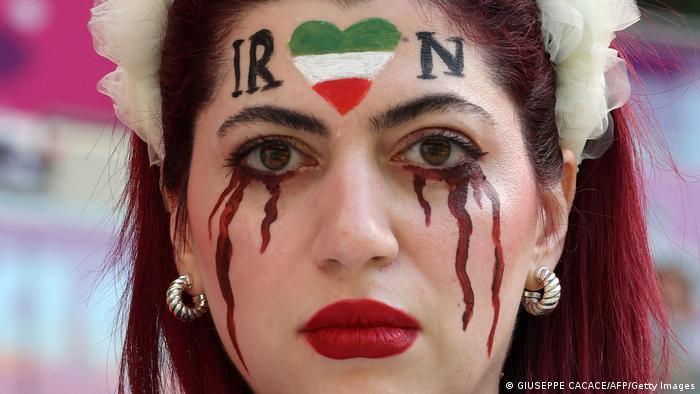 "Sow the wind, and reap the whirlwind": the global community has reacted with horror to the news of the executions. The European Union condemned the deaths, and imposed further sanctions. Meanwhile, the protests, in Iran and abroad – including at the World Cup, above – continue. Following the adage "sow the wind, and reap the whirlwind", opponents of the regime have vowed that Jina Mahsa Amini will not have died in vain.

END_OF_DOCUMENT_TOKEN_TO_BE_REPLACED
Social media
and networks
Subscribe to our
newsletter