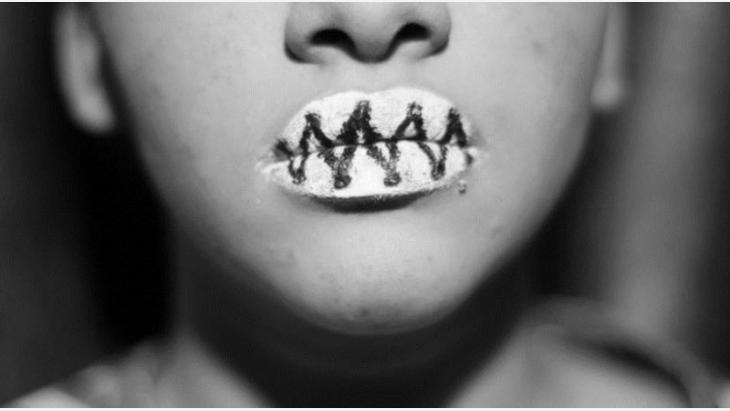 Political Islam posed an unprecedented challenge to womenʹs emancipation in Sudan. Despite worsening circumstances, numerous womenʹs rights organisations, associations and centres continued to lead courageous campaigns all over the country to address the many pressing issues women were and are still facing. By Wini Omer

In Sudan, womenʹs active fight for political and economic rights goes back to the 1960s, when they won the right to political participation (1964) and to equal pay for equal work (1969) as two of many milestones. With the rise of the National Islamic Front (NIF) to power through a military coup in 1989, however, everything changed and the Sudanese womenʹs movement suffered a grave setback, when many of their achievements were reversed. Political Islam posed an unprecedented challenge to womenʹs emancipation in Sudan.

Despite worsening circumstances, numerous womenʹs rights organisations, associations and centres continued to lead courageous campaigns all over the country to address the many pressing issues women were and are still facing. This article will present three of them: the pressure group No to Womenʹs Oppression, the Sudanese Organisation for Research and Development (SORD), and SEEMA Centre for Training and Protection of Children and Womenʹs Rights.

Since taking over power, NIF has created many discriminatory laws to limit the participation of women in the public sphere, restrict them to the private and family domains, and control their lives and bodies.

For example, women are severely affected by a series of laws and regulations called the Public Order Regime, which dictate peopleʹs appearance in public, amongst many other things. In addition, many workplaces have adopted internal regulations that require women to wear the headscarf and follow strict dress codes, including all governmental institutions and universities. 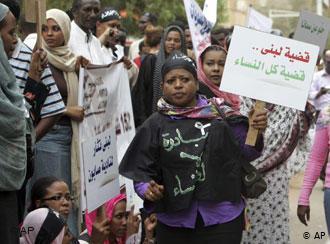 "The Lubna case affects us all ": Sudanese women demonstrate in solidarity with Lubna Hussein, who was sentenced to 40 lashes for "wearing indecent clothing". In the wake of Husseinʹs case, a group of womenʹs rights activists founded the pressure group No to Womenʹs Oppression to fight for the abolishment of humiliating and discriminatory Sudanese laws and for gender equality

The Public Order Regime started as a local order in Khartoum State in 1996 and was then expanded to many other states.

Its violation is punished under the Sudanese Penal Code. The Regime profoundly impacts the lives of both women and men in Sudan, as citizens can find themselves criminalised for what should be considered personal choices, such as the way they dress or style their hair.

It also limits personal freedoms in many other ways, for example by prohibiting the production, sale and consumption of alcohol, and what are deemed “indecent” acts.

The legislation includes little instruction on its implementation, leaving the interpretation of what constitutes a violation and its severity to the public order police and their personal biases.

The Public Order Regime is a real threat to womenʹs safety and dignity in public spaces. Every year, around 43,000 women are arrested for violating the public order and sentenced to painful and humiliating punishments, including flogging, imprisonment and fines.

One of the most prominent cases is that of Sudanese journalist Lubna Ahmed al-Hussein, arrested in 2009 for “wearing indecent clothing” according to Article 152 of the Penal Code. In the wake of al-Husseinʹs case, a group of womenʹs rights activists founded the pressure group No to Womenʹs Oppression to fight for the abolishment of humiliating and discriminatory Sudanese laws and for gender equality.

The attack by the state on civil society has been unrelenting and reached its peak in the last decade, when many womenʹs rights organisations struggled to receive funding, renew their registration, or gain access to certain communities, while some organisations were shut down altogether. Even the events for International Womenʹs Day were cancelled.

In this difficult environment No to Womenʹs Oppression – whose Director, Dr Ihsan Fagiri, has been a political detainee since 22 December 2018 – have continued their work, creating a state of solidarity around womenʹs issues and the fight against oppression of women. In their campaigns, monthly forum and open events they raise awareness of the serious challenges that women are facing. The group brings together women from different parts of the political spectrum, professions and geographical areas to align their efforts towards common feminist goals.

The main focus of the group has been to support women targeted by the law, especially under the Public Order Regime, such as vendor women who are frequently arrested for their economic activities.

For sexual equality in Sudan 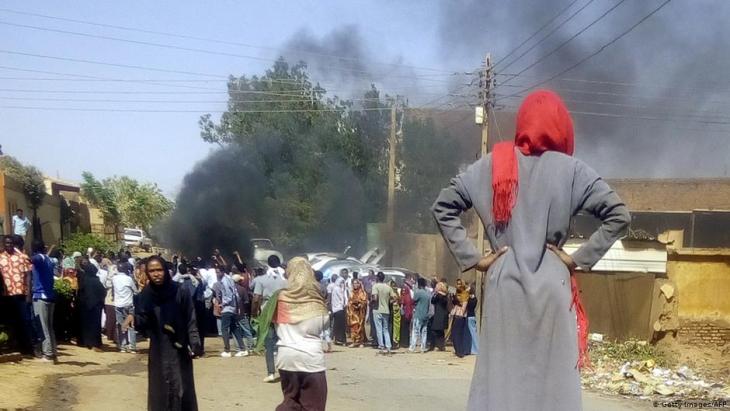 Growing self-confidence: women have also taken part in the recent protests against long-term dictator Omar al-Bashir, with some of them loudly leading demonstrations in cities such as Omdurman and Khartoum. "Womenʹs rights activists have kept up their resistance, working in a misogynistic environment, where laws and regulations and the entire political system are against them, and where the assumption of male superiority is deeply rooted in society," writes Wini Omer

Charges of violating the Regime are, until now, considered a stigma in Sudan, so that many women prefer to stay quiet, face unfair trials without legal aid and give up their chances to be heard. No to Womenʹs Oppression has been successful in drawing attention to the discrimination against these women and encouraging women to break their silence and speak out about their experiences with the public order police.

The womenʹs movement in Sudan has largely been focused on promoting womenʹs economic and political rights. Meanwhile, many women were stuck in court in divorce or custody battles, disadvantaged on many levels due to the patriarchal nature of the Personal Status Law for Muslims.

The Personal Status Law in Sudan legalises child marriage, with Article 40 giving the father the explicit right to marry off his daughter at the age of 10. Accordingly, Sudan has one of the highest rates of child marriage globally.

The Sudanese Organisation for Research and Development (SORD) has published many studies that shed light on the socio-economic consequences of child marriage, the harmful effects of the current law and the impact of patriarchal and discriminatory laws on women in general. Their efforts also aim at increasing womenʹs access to justice in Sudan, especially in family courts, where women in divorce or custody battles currently face endless legal procedures – to no avail.

The case of Noura Hussein has drawn greater attention to the challenging environment that Sudanese women live in, an environment that normalises violence against them: Hussein had been forced to enter a marriage contract at the age of 16 and, after running away, had to eventually marry at 19, when she killed her husband in self-defence and was subsequently sentenced to death.

While her sentence has recently been reduced to five years in prison, her fate still highlights the urgent need for legal reform and social change. Child marriage is deeply rooted in Sudanese society and only the criminalisation of this practice by law will provide the base for changing attitudes and practices.

This is where SORDʹs project “Towards Gender Equality in Sudan” ties in. The organisation has drafted a reform law and discussed it in tens of workshops held all over Sudan. They submitted the law proposal to the Ministry of Justice in 2016 and were invited by the Government to be part of the National Committee to Reform the Personal Status Law for Muslims the subsequent year.

While the draft has not been finalised yet, discussions are still under way and the project has already fuelled conversations about womenʹs rights in the private sphere, where it has paved the way for women to renegotiate their rights within their families.

From victims to survivors

The SEEMA Centre for Training and Protection of Children and Womenʹs Rights is a non-governmental organisation and the only institution in Sudan that provides comprehensive services to women and children who are victims of violence, including psychological, legal and medical assistance. The name of the Centre itself, SEEMA, combines the initials of five survivors of violence who have inspired the launch of the Centre.

Since its launch, the Centre has supported hundreds of women and children, who have suffered acts of violence and injustice, ranging from sexual harassment and legal discrimination over forced underage marriage and female genital mutilation to domestic violence and rape.

SEEMA also provides capacity-building training for individuals to become service providers for victims of violence in their respective communities and sensitise these communities to the damages done by human rights violations. By responding to the urgent needs of victims, expressing public condemnation of violence and advocating legal reform, the SEEMA Centre has managed to help women to turn from victims to survivors.

Womenʹs rights activists have kept up their resistance, working in a misogynistic environment, where laws and regulations and the entire political system are against them, and where the assumption of male superiority is deeply rooted in society.

The organisations mentioned above are just a few examples of the broad spectrum of groups that work hard and tirelessly to promote womenʹs rights and end discrimination against women in Sudan. The journey to achieve equality and justice for women has begun a long time ago and there is still a long way to go, but women will not aim for anything less. While Sudanese women are out there in the streets across the country, protesting against their oppression, their hearts are full of hope and desire for a better future. 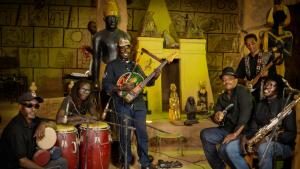 "Beja Power" by Noori & His Dorpa Band is a scintillating introduction to one of the oldest and least known cultural traditions in Sudan and Africa. Rather than slavishly ... END_OF_DOCUMENT_TOKEN_TO_BE_REPLACED

The lack of grain supplies from Ukraine is forcing Egypt to act. Now even the Toshka project is being revived to grow grain in the desert. Birgit Svensson travelled to see it END_OF_DOCUMENT_TOKEN_TO_BE_REPLACED

United Arab Emirates strongman Sheikh Mohammed bin Zayed al-Nahyan, who was formally elected president on 14 May, has led a realignment of the Middle East, creating a new anti- ... END_OF_DOCUMENT_TOKEN_TO_BE_REPLACED

A stage, lights, a mesmerised audience: it looks like an Egyptian folkloric concert, but Umm Sameh is singing to heal the sick by driving out the demons that possess them END_OF_DOCUMENT_TOKEN_TO_BE_REPLACED

Sudanese entrepreneur Mohamed Samir watches proudly as workers assemble garishly coloured rickshaws, unique in the North African nation because they run on electricity in a bid to ... END_OF_DOCUMENT_TOKEN_TO_BE_REPLACED

From the Euphrates to the Mekong, dams that ensure one country's water supply risk leaving others parched. But shared water resources can be a source of peace as well as conflict ... END_OF_DOCUMENT_TOKEN_TO_BE_REPLACED
Author:
Wini Omer
Date:
Mail:
Send via mail

END_OF_DOCUMENT_TOKEN_TO_BE_REPLACED
Social media
and networks
Subscribe to our
newsletter