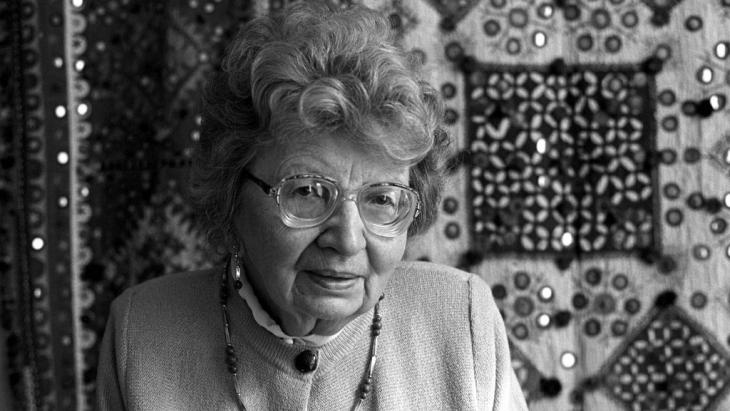 This year Annemarie Schimmel, the great German scholar of Islamic studies, would have turned 100. Unique within the German and international academic community of her time, Schimmel’s pioneering work was characterised by a love of Islam. A tribute by Stefan Weidner

The very fact that Annemarie Schimmel was the first woman to make a name and a career for herself in Islamic studies – not just in Germany, but worldwide – conveys some idea of her significance. And yet the 100th anniversary of her birth on 7 April 2022 passed with scarcely a mention. Aren’t there more important things going on right now – like the war in Ukraine, for instance?

The first woman in Islamic studies

I admire Annemarie Schimmel for her tenacity. She made her mark in an academic field dominated by hugely conceited men and to become more famous than all of them put together. She talks about all the little humiliations she had to suffer in the process in her autobiography, Mein west-oestliches Leben (My West-Eastern Life): the belittling of her presence and her name, for example, by people who called her "Miss", "Schimmelin", "Cemile" and "Jamila".

Even if the last of these means "beautiful", it still reduced her to her appearance. Would anyone have dared do the same to a talented, ambitious man? "Men are our enemies," Schimmel quotes a feminist friend as saying.

As a student in Berlin during the war, however, she was very well-connected in the world of German Oriental studies. She gained her doctorate in 1941 – at the age of just 19 (unimaginable today) – and in March 1945, amid the chaos of the war’s end, she submitted her postdoctoral thesis. And yet it was not until 1961 that she was awarded an academic position in Bonn that conferred anything like the status she should have had.

Annemarie Schimmel was the first female Islamic studies scholar to make a name for herself. We can get some idea of the dearth of women in this field from the fact that, of the dozens of Koran translations into European languages, it is only in recent times that any translations by women have been published (one by Angelika Neuwirth, and one by Lamya Kaddor and Rabea Mueller). This example alone exposes the foolish idea that persists in patriarchal cultures – including in the West until very recently – of religion being the preserve of men. 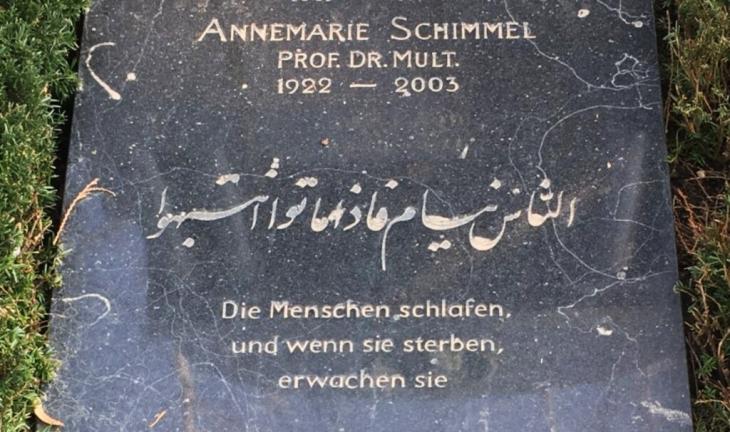 The International Center for Comparative Theology and Social Issues at the University of Bonn commemorated their famous scholar with a festive event on 7 April 2022. Visitors were invited to follow in her footsteps with a city walk. The walk ended at Schimmel's grave in the Poppelsdorf cemetery. Otherwise, there was little public appreciation for a scholar who made a name for herself, not only in Germany, but worldwide as the first woman in Islamic studies

Annemarie Schimmel normalised women studying Islam. The following generation produced many significant female Islamic studies experts; in one way or another they may all be seen as heirs to Annemarie Schimmel’s legacy.

Her translations and books also laid a path for my own career as an Islamic studies scholar. Annemarie Schimmel was one of the first – and one of few people in her generation – to take an interest in the contemporary Muslim world, not as dead philological research material or as a political and sociological problem, but with enthusiasm for its contemporary literature. Annemarie Schimmel looked beyond the classics of Middle Eastern literature to study writers of her own and even of younger generations.

This was something entirely new, virtually unheard of. The present-day Islamic world was brought into focus, not as a political problem to be considered, but as a lively culture on a par with our own. As early as 1975, she published an anthology of translated, contemporary Arabic poetry. She never regarded her Arab, Turkish, Iranian or Pakistani friends and acquaintances as mere "native informants", let alone as the objects of anthropological, ethnological, sociological or political research, as many people still do to this day.

Annemarie Schimmel gave up the distance that separated many in her field from the "subjects" of their research – a distance that is frequently cited as necessary for maintaining “objectivity” – and thus stood head and shoulders above others of her time.

Despite all the forward-looking aspects of her work, however, she stands on the other side of a divide that made a straightforward continuation of her approach difficult for those of us who came later. This divide did not begin with the attacks of September 11 2001; it had already become evident to Annemarie Schimmel before that time, in the campaign that was waged against her when she was awarded the 1995 Peace Prize by the German Book Trade.

She was accused of not having taken a clear enough position on the death fatwa issued by Iran’s Ayatollah Khomeini against the British Indian writer Salman Rushdie, the author of the novel The Satanic Verses. In fact, people said she had shown unwarranted sympathy for the outrage felt by many Muslims. 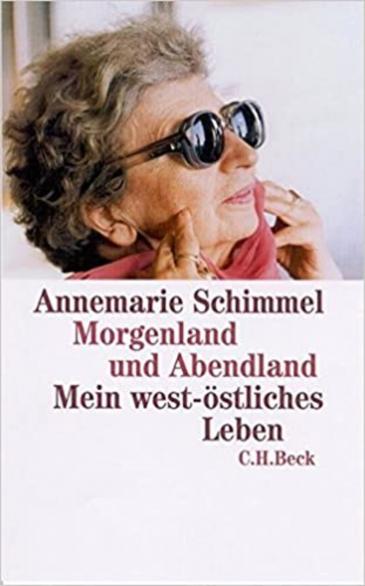 Pioneer in a man's world: in her biography, Islamic scholar Annemarie Schimmel talks about all the little humiliations she had to suffer in the process: the belittling of her presence and her name, for example, by people who called her "Miss", "Schimmelin", "Cemile" and "Jamila". Even if the last of these means "beautiful", it still reduced her to her appearance. "Would anyone have dared do the same to a talented, ambitious man?" asks Stefan Weidner. "I admire Annemarie Schimmel for her tenacity. She made her mark in an academic field dominated by hugely conceited men and to become more famous than all of them put together"

This incident was a herald of the ideological disagreements that shaped German, European and American politics after 9/11. It wasn’t enough for Annemarie Schimmel to take a clear stance against Khomeini’s fatwa. She was also expected to deny any legitimacy to the outrage felt by devout Muslims, to deny there was any cause for it. In other words, she was expected to give her blessing to the West’s usual arrogance and ignorance.

And because she refused to do that, people were able to project onto her the new image of the enemy. It is one that still has us in its grip to this day and has contributed in no small part to us overlooking the far more dangerous enemy to the east of Europe.

Of course, the conflict over the awarding of the Peace Prize to Annemarie Schimmel was a symptom rather than the cause of the divide that separates her from my generation and younger scholars, but for us it has been almost impossible to breach. So what exactly was it, and what caused it?

A mercilessly objectivising, "scientific" distance, or an equally merciless culture of suspicion, supposition and distrust, are no way to gain a proper understanding and appreciation of the phenomena of foreign cultural history, let alone to admire them. They become dead research material, mere objects under autopsy.

It was the American-Palestinian intellectual Edward Said, a contemporary and an Ivy League colleague of Annemarie Schimmel’s, who expressed this distrust (which generally rests on reciprocity) in the strongest and most convincing terms.

Said’s book Orientalism, the seminal text of postcolonial theory published in 1978, put an end to the epoch of supposed innocence, by bringing the necessary illumination and theory to a divide that had its roots in the upheavals of the colonial period.

That said, when Edward Said dismantled "Orientalism", he wasn’t only referring to the academic field of Islamic studies – and certainly not to the approach Annemarie Schimmel took to that field. He also graciously spared German orientalism from his critique, partly because he spoke no German, but also partly because the strictly philosophical nature of German oriental studies offered less to attack than the power politics inherent in the approach taken by other, older colonial powers.

Annemarie Schimmel might therefore serve as a good example of Edward Said overshooting his target or simply misfiring. You will find no racist denigration of Islam in her work, nor any research that was open to political or other abuse. And so, while Annemarie Schimmel should not have felt personally attacked by Edward Said, she was still working in a tradition and a field that, viewed from an anti-imperialist and postcolonial perspective as Edward Said did, had rightly become suspect.

In progressive circles, therefore, Islamic studies lost its focus; it became questionable, fragmented, atomised. Amid the often opaque ideological conflicts that resulted from this, there was suddenly little room for a vision of Islam like Annemarie Schimmel’s, as the furore over the German Peace Prize subsequently revealed.

We may describe this vision with two very simple key phrases as a loving and enthusiastic – and as a romantic and romanticising – view of Islam. It is a vision that undermined Edward Said’s and postcolonial theory’s later criticism of Orientalism, as well as the denigration of its subject matter that has always existed in the field of Islamic studies, from the time of Christian anti-Islamic propaganda.

But this vision also thereby undermined a form of intellectual imperialism of which we seldom become conscious, consisting of the uncritical celebration of progressive modernism and a denigration of anything that from the modernists’ perspective smacks of pre-modernity, of being out of step with the times, underdeveloped or regressive. Ever since the Enlightenment this progressive modernism has gone hand-in-hand with a distaste for religion, mysticism and aesthetics – everything, in other words, that seeks to or could enchant the world; everything to which Annemarie Schimmel devoted her work.

I envy her for having lived and worked almost unquestioningly and naturally in this context. Looking at Annemarie Schimmel’s work a century after her birth, this is the gulf that we must try to span, if we want a shared future worth living in. I can think of no better preparation than reading Annemarie Schimmel.

Stefan Weidner is an author and Islamic studies scholar. This article is the summary of a speech given by the author at the University of Erfurt on 23 April 2022 in celebration of Schimmel’s birthday. The full version will be published in August in Bernstein-Regal, a series published by Bernstein Verlag.

Giessen, Eichsfeld, Kusel, Berlin – cars bearing old German number plates are the latest trend on the streets of Cairo. Many Egyptians regard the discarded plates as chic. What ... END_OF_DOCUMENT_TOKEN_TO_BE_REPLACED

Tunisia has been going through a severe economic and political crisis in recent years. More than one in three young people there are unemployed. For many skilled, qualified and ... END_OF_DOCUMENT_TOKEN_TO_BE_REPLACED

German imams have publicly expressed their solidarity with the women of Afghanistan. In a letter of protest, the clerics say that the Taliban regime's decree barring women from ... END_OF_DOCUMENT_TOKEN_TO_BE_REPLACED

At the end of every year, the team at Qantara.de gives you a run-down of the ten most-read articles on the site over the past 12 months. Here is a quick overview of the stories ... END_OF_DOCUMENT_TOKEN_TO_BE_REPLACED

Social engagement is often motivated by religious factors. A new book explores the background to these community efforts and appraises how effective they are in helping to ... END_OF_DOCUMENT_TOKEN_TO_BE_REPLACED

The government in the Netherlands, one of the last European nations to abolish slavery, has made an historic apology. But some feel that there is still a long way to go. By Ella ... END_OF_DOCUMENT_TOKEN_TO_BE_REPLACED
Author:
Stefan Weidner
Date:
Mail:
Send via mail

END_OF_DOCUMENT_TOKEN_TO_BE_REPLACED
Social media
and networks
Subscribe to our
newsletter