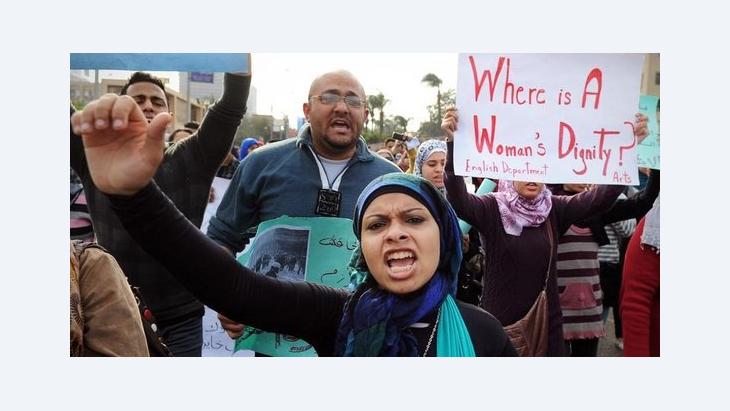 Women during the ''Arabellion''
Neither Winners nor Losers

﻿The women's movement in Egypt goes back a long way. But how has the situation of women changed in the 18 months since the start of the Arab Spring? The Egyptian-German political scientist and women's rights activist Hoda Salah takes stock

﻿Both inside and outside Egypt, people are asking themselves whether Egyptian women are the winners or the losers of the revolution. Women were a highly visible presence on Tahrir Square and in the revolution as a whole, but where are they now?

I have noted that many people in the so-called 'West' have a primarily negative view of developments in Egypt. In this respect, they are much more pessimistic than most Egyptian women and men. That being said, this fundamental optimism in Egypt cannot hide the fact that most women's rights activists really did expect more from the revolution. 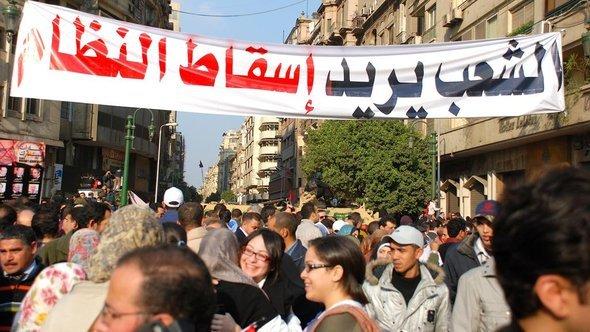 "The people want the regime to be toppled!" Active participation in the revolution in Egypt: in spring 2011, men and women agreed that it was time to rid the country of Mubarak's dictatorship

A question of perspective

We must state quite clearly which women we are talking about. It must be clear that there is no such thing as "the Egyptian woman". Gender must always be considered in the light of class and origin – these are strong markers of identity. This is a truism, but one that is given too little consideration in the context of the Arab rebellions.

Established political science views politics from above. It considers the level of state, analyses constitutions and electoral law or counts how many women are members of parliament or in decision-making positions.

When viewed from this perspective, the answer is clear: Egyptian women were the losers of the revolution. They account for only 2 per cent of members of parliament. Moreover, there are hardly any women on the constitutional committee. A quota system that was in place in the Mubarak era guaranteed women 12 per cent of all seats in parliament. This system was abolished by the military council in July 2011. There are only 12 women in the newly elected Egyptian parliament. 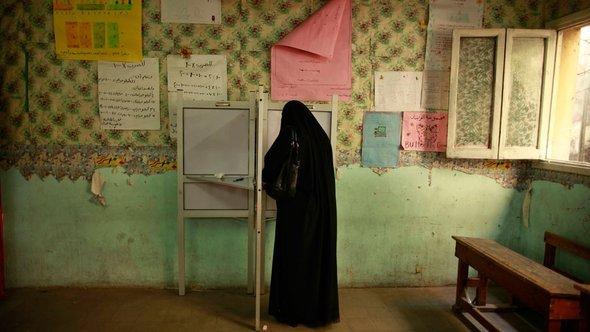 Supporting the erosion of their own rights: many women in Egypt voted for the Muslim Brotherhood and the Salafists of the Al-Nour party, the two groups that now dominate the Egyptian parliament, known for their anti-female stance

​​But let us adopt the perspective of transformation research and take a look at "politics from below". From this perspective, we can see that when it comes to social movement and a change in values and in terms of the relationship between the sexes and the different generations, women are the winners of the revolution.

The revolution of values

When Egyptian women were called whores by both the regime and the conservatives, they coolly replied: "exactly, we are whores" and just carried on demonstrating.

The fact that women spent the night on Tahrir Square was in itself an historic moment. Today, some of these women appear on satellite television and tell millions of Arabs how they were humiliated, sexually harassed and beaten by police officers. Today, they say such taboo sentences as "he touched my vagina" or "he threatened to rape me" loudly and confidently. That in itself is a revolution.

Previously, the attitude in Egypt and in many Arab countries was that if someone made a pass at a woman or harassed her, it was the woman's fault. Victims of rape were often forced into marriage. Now, however, a growing number of parents are standing by their daughters and bringing charges against the rapists. The Egyptian army was forced to apologise.

Society has become more aware of women's rights. Women are showing that they are indeed victims, albeit victims with pride.

The question is, of course, whether the counter-revolution will destroy the green shoots of influence and liberty. In response to this question, I pose another question: about what kind of women are we talking here?

Middle-class women are mostly interested in very individual human rights. They are calling for freedom in the private realm in particular. They want sexual self-determination and they do not under any circumstances want to have to abide by any dress codes. They are calling for the freedom of art and the freedom of the press. But hardly anyone is listening to their demands at the moment.

Women who live beneath the poverty line – and these women still account for 40 per cent of the Egyptian population – have very different needs for the time being. Above all, they are looking for economic human rights. They quite simply want clean drinking water, electricity, health care, and more security for their largely informal jobs. The freedom of art is not a priority for them; they don't have access to the world of culture.

And let's not forget: many women voted for the Islamists, which means that they are on the side of the winners. Most of the small number of women who do have seats in parliament are very religious indeed. They are resisting – some of them aggressively – the introduction of women's rights.

Female members of parliament who represent the Muslim Brotherhood, for example, want to reverse the ratification of the UN Convention on the Elimination of All Forms of Discrimination Against Women (CEDAW), which requires countries to take action against discrimination against women. Egypt was one of the first countries to sign the convention. The Egyptian women's movement is one of the oldest and strongest in the Arab world, but a more secular Egyptian society is on its agenda.

Hope for the future

Nevertheless, there are enough well-educated, strong women who could take political office. It is true that women and men alike from the Socialist, left-wing, liberal, and secular movements lost the first round in the new Egypt. However, they could be the winners in four years' time.

In order to do so, it is absolutely essential that they enter into political alliances. To date, however, the non-conservative camp has been deeply divided. Moreover, feminists have to behave more assertively. After all, there is no point waiting for someone to invite them to participate in the constitutional committee. They have to open the door themselves.

The Egyptian-German political scientist Hoda Salah works at the Freie Universität and the Otto-Suhr-Institute in Berlin. She also works as an independent political adviser in Germany and Egypt and is active in both Amnesty International and the Arab Women's Solidarity Association. Salah lives in both Berlin and Cairo.

In Doha, Arabs from Morocco, Tunisia, Egypt and Algeria are gathering to celebrate the first ever FIFA World Cup to be held on Arab soil. The criticism from Europe? Over the top, ... END_OF_DOCUMENT_TOKEN_TO_BE_REPLACED

November 2022 sees the Arab world firmly in the spotlight with the COP27 in Egypt and the FIFA World Cup in Qatar. Public trust in MENA governments is weak, thanks to their ... END_OF_DOCUMENT_TOKEN_TO_BE_REPLACED

Palme d’Or winner "Boy from Heaven" is a classic crossover film in which cultural elements are mixed together in haphazard and random fashion. Shady Lewis Botros bemoans the ... END_OF_DOCUMENT_TOKEN_TO_BE_REPLACED

COP27 in Sharm el-Sheikh is turning into a PR disaster for Egypt’s military regime. Instead of praise for the host, the news is full of solidarity for imprisoned activist Alaa ... END_OF_DOCUMENT_TOKEN_TO_BE_REPLACED

"Rebel Game: The Power of Football in the Middle East and the Qatar World Cup", an anthology published by Middle East researchers Jan Busse and Rene Wildangel, takes the upcoming ... END_OF_DOCUMENT_TOKEN_TO_BE_REPLACED

Comments for this article: Neither Winners nor Losers

One of the more important functions police need to do in a society is to be both peacekeeper and protector for everyone -- including women! How police respond to public protest is something in which we all should be concerned. For more on this and other important police improvement issues, see “Arrested Development: A Veteran Police Chief Sounds Off About Protest, Racism, Corruption and the Seven Steps Necessary to Improve Our Nation’s Police” (Amazon.com). And my blog at http://improvingpolice.wordpress.com/ where other current police improvement issues are discussed. The goal in a free society is to have great police. Great police are police who are well-trained and led, restrained in their use of force, honest, and courteous to every person.

END_OF_DOCUMENT_TOKEN_TO_BE_REPLACED
Social media
and networks
Subscribe to our
newsletter