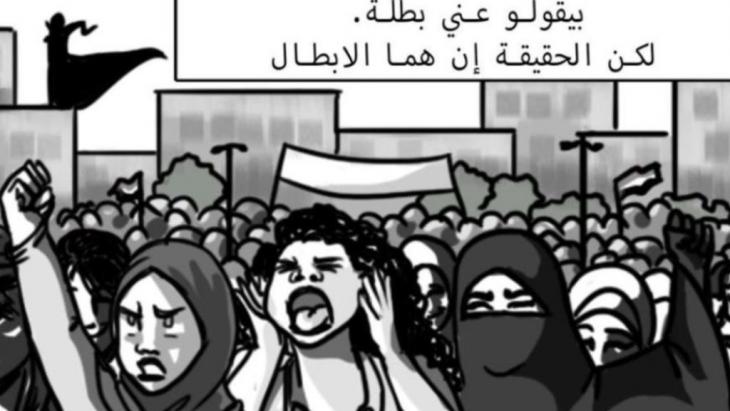 Women in Egypt
The long and bumpy road to gender equality

Alexandra Kinias was denied a job as a site engineer in an oil company because of her gender. The rejection letter clearly stated that the company would rather offer its jobs to male engineers. Women in Egypt have come a long way since then, she says

Earlier this year, Instrumentation and Control Engineer Sara Mansour won the "Nex-Gen Female of the Year", an award that recognises the contributions of young female professionals with the potential to be future business and industry leaders. Mansour, who works at the Egyptian Natural Gas Company Gasco, received the award at the Women in Energy Awards and Conference during Egypt Petroleum Show 2019. She is among many young female engineers who are moving into this male-dominated industry.

In 2007, Sara Mansour received a scholarship from the Egyptian Ministry of Petroleum and PETRONAS to study at PETRONAS University of Technology UTP, where she received her Bachelor's Degree in Electrical and Electronics Engineering with honours. Exactly three decades earlier, I was denied a job as a site engineer in an oil company because of my gender. The rejection letter clearly stated that the company would rather offer its jobs to male engineers. Women in Egypt have come a long way since then.

The number of Egyptian women entering this field and other male-dominated fields continues to grow. The image of female engineers in overalls and safety hats working on oil rigs is a sight that people are slowly growing used to. Stories similar to Mansour's are great accomplishments for women on all fronts. They are silver linings in the clouds.

Women who are venturing into male-dominated jobs are breaking social taboos. They are taking the first bullets. They are fought, criticised, ridiculed and stigmatised. Men look down on them and doubt their capacities. They don't consider them peers, but adversaries who are after their jobs.

It is important to put all that in perspective to understand that in spite of all that, women have strived hard to excel and have succeeded and proved themselves as equals.

Regression in women's status in Egypt

While we are elated over women's success stories like Mansour's, let's not ignore the fact that over the last few decades, there has been a noticeable regression in women status in Egypt. The regression was caused by the increasing influence of Islamists in society, which reached its apex after the rise of the Muslim Brotherhood to power.

The Islamist Parliament formed in January 2012 had already started taking action to repeal both the kuli' law that allowed women to divorce and the law that criminalised female genital mutilation. Moreover, dropping the age of marriage to 16 was also on the agenda of the issues discussed in that parliament. The future of Egyptian women became even bleaker when the Muslim Brotherhood issued a statement in March 2013 denouncing the UN Declaration to End Violence against Women on the basis that this declaration would destroy the family and lead to a complete disintegration of society.

Abortions are illegal in Egypt unless they are necessary to save a married woman's life. But that doesn't stop local women from having one. Egyptian society needs to acknowledge ... END_OF_DOCUMENT_TOKEN_TO_BE_REPLACED

Food prices doubled, salaries halved, banks restricting withdrawals: Egyptians now have the same problems as the Lebanese. But if things get worse here, the fallout will be far ... END_OF_DOCUMENT_TOKEN_TO_BE_REPLACED

Giessen, Eichsfeld, Kusel, Berlin – cars bearing old German number plates are the latest trend on the streets of Cairo. Many Egyptians regard the discarded plates as chic. What ... END_OF_DOCUMENT_TOKEN_TO_BE_REPLACED

Egyptian Sufis have been on the defensive against the country's Islamists for decades. Meanwhile, interest in mysticism is growing among the young members of Cairo’s middle and ... END_OF_DOCUMENT_TOKEN_TO_BE_REPLACED

Chinese President Xi Jinping's visit to Saudi Arabia in December 2022 may have rattled Washington, but it simply highlighted the Arabs’ desire to diversify their foreign relations ... END_OF_DOCUMENT_TOKEN_TO_BE_REPLACED

END_OF_DOCUMENT_TOKEN_TO_BE_REPLACED
Social media
and networks
Subscribe to our
newsletter