Between Oppression and (Self-) Empowerment

At a two-day conference organised by the German Friedrich Ebert Foundation, women's organisations from Europe, the Middle East and Africa met to talk about their work and discuss the role of Islam in their own societies. Abdul-Ahmad Rashid listened in

Not only religious organisations, but non-religious groups too, chose to attend the conference in Germany

​​Inspiration for the conference "Women in Islam – Between Oppression and (Self-) Empowerment", which took place in Cologne, Germany, at the end of last week, came from Lale Akgün of the German Social Democratic Party (SPD). Akün, who is of Turkish extraction, has become a role model for many Muslim women. As a member of the German Bundestag, and with a PhD in psychology, she is a successful professional who knows her rights and has a keen sense of equality.

But the 53-year-old is well aware that for many Muslim women this is by no means the case. The politician believes that the family has a key role to play in helping to create this equality. Daughters, she believes, whether within the family circle or in the wider public sphere, should be given exactly the same rights and be treated in the exactly the same way as sons.

​​However, the real world situation in many Islamic countries is quite different. In some places, the natural rights of women are so far from being on the agenda that they are in fact often abused. But this situation is not to be laid at the door of the Islamic religion per se, says Akgün, it has rather more to do with the way the religion is used for the purpose of oppressing women.

A new interpretation for the Koran?

Further reasons for this situation according to the Turk who holds German citizenship, are to be found in the desperate economic straits that many of these countries find themselves in, as well as in the prevailing faltering state of democratisation. Reasons enough for inviting groups to the conference who were interested in presenting an alternative face of Islam as well as in offering new approaches to its interpretation.

What is needed most of all in order to encourage and support Muslim women, says Akgün, is a new interpretation of Islam's holy scriptures. "It's really about a re-reading of the whole from a woman's point of view, just to see what the female role in our religion actually is, where the scales have been tipped too far in favour of the male and where the female has been neglected," says the SPD politician. "When looked at in this way, it is clearly high time that women began asking themselves what their role in the religion actually is."

Patriarchal interpretations of the Koran

Looking at the Koran through a woman's eyes is exactly what Dutch-based Egyptian journalist Nahed Selim is already doing. She would like to see the Koran freed from its purely patriarchal interpretations. The right of interpretation of the holy scriptures has been a purely male domain for centuries.

​​To show what she means, Selim cites the verses in the Koran that sanction slavery. With the practice having been abolished in Islamic countries, nobody, she argues, would now seriously argue for its reinstatement on the basis of what is said in the Koran. Other verses, Nahed Selim believes, must now be given the same treatment.

As an emancipated woman, her plea is that where the Koran's message is misogynistic, it should be ignored. Her targets include polygamy, the physical and mental maltreatment of women and inequality between men and women in the eyes of the law.

Interpreting the Koran in its historical context

This is a problematic demand because for Muslims the Koran is the revealed Word of God, literal and inviolable. For Nehide Boskurt, too, it is a step too far. The professor from the Theological University in Ankara puts forward a different solution. She is in favour of a historical classification of the verses.

"We cannot simply ignore the verses. I am a historian; I have the text lying before me. How can I just ignore it?" she asks, before adding, "For me it is a question of interpretation. So I am for working to gain a clearer understanding of the historical context."

To illustrate her point, Boskurt gives an example: the verse where it is stated that the testimonies of two women are equivalent to that of one man. One well knows that women back then had no experience in business.

"In this connection the Koran states that, where monetary transactions are concerned, two women must bear witness, so that one can remind the other. At that time women had no experience of business, but nowadays this is not the case. Can anyone today seriously claim that the statements of two women correspond to that of one man?" 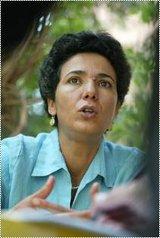 ​​Irrespective of whether the Koran verses should be left out or historically contextualised, the Cologne conference makes one thing clear. There is no shortage of effort being put into the task of motivating women in the Islamic world to fight for their rights and their social equality.

Not only religious organisations chose to attend, non-religious groups too, such as a secular Muslim group from Great Britain or the Swiss-based "Forum for Progressive Islam" were represented.

The latter institution, the majority of whose members are women, is very precise in its aims as president, the Tunisian, Saida Keller-Messahli explains: "We take a three-pronged approach that tackles the areas of democracy, international law and the universal declaration of human rights. We believe that in these areas there is still a great deal to be done in relation to understanding Islam or interpretation of the holy Koran."

Emancipation in the modern social context

The members therefore accept only those religious norms which are consistent with and do not contradict this approach, says Keller-Messahli. This means that, on occasion, they adopt standpoints which do not always tow the conforming line.

"If it means that, for religious reasons, a little girl has to miss out on swimming lessons, for example, then we are prepared to take a stand and show that we are against this because it is violation of the right of every child – that is the right to physically develop and mature and the right to equality," Keller-Messahli states.

Other Muslim women's organisations on the other hand prioritise a more active educational role in their societies. The "Rahima" group in Indonesia, for example, seeks dialogue with the leaders of Islamic religious communities in order to increase awareness on sexual equality.

Egypt's "Women and Memory Forum" has set up a website to encourage women to lay aside their inhibitions and ask questions on the taboo subject of sexuality. The "Baobab" organisation from Nigeria is dedicated to supporting women's issues and interests at the local level.

But it is still the case that for these women things are much more difficult than they are for women in the West. Emancipation in the Islamic world still has a long way to go.

However Nahed Selim remains optimistic. "By giving more support to women one also helps to strengthen Islam, about half of all Muslims are women, after all. When they are content and gain just treatment all of Islamic society and the religion, too, will be fairly treated."

Women's Rights in Turkey
The Crux of Modernization
In terms of women's rights, Turkey has undergone a minor revolution in the past five years. Nevertheless, laws first exist only on paper. Sometimes decades pass before they are implemented. Dilek Zaptcioglu reports

END_OF_DOCUMENT_TOKEN_TO_BE_REPLACED
Social media
and networks
Subscribe to our
newsletter