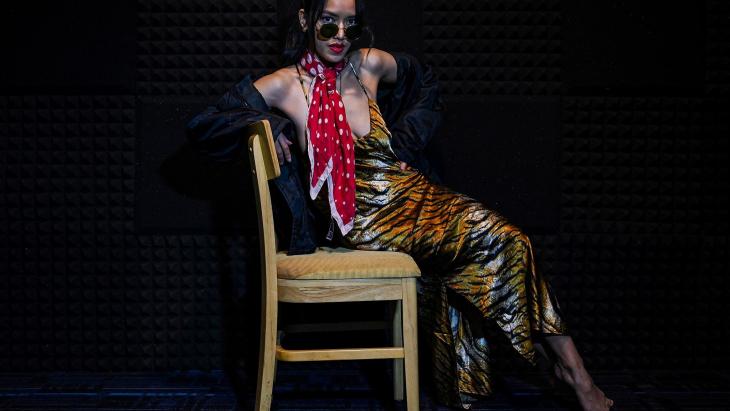 The first female signing for label Def Jam – the label behind superstars from Jay-Z and Rihanna to BTS and Justin Bieber – in Southeast Asia, SYA's debut single "PrettyGirlBop" tackles misogyny and acceptance in her Muslim-majority homeland

Wearing sunglasses and a tiger print dress as she raps into a mic, Malaysian hip-hop artist SYA calls for empowerment while taking a sledgehammer to stereotypes of Muslim women. "I just want women to feel more comfortable in their own skin," SYA, whose long dark hair is uncovered, tells journalists. "I don't have to pretend to be somebody else just to fit what society deems is good."

The track, which also features up-and-coming Singapore artist Yung Raja, includes scenes of SYA dressed in white, and stroking a cat wearing a pearl necklace in a lavish bedroom. Underlining her desire that women should not be pigeon-holed, it then switches to her holding a snake and wearing a leopard print jacket, as she defiantly raps: "I wanna be like me."

She is among a crop of young artists from Malaysia, Singapore, Indonesia, Thailand and the Philippines who have been signed by global music giant Def Jam's Southeast Asian arm. Lauded by the industry as a rising star, the 25-year-old says she faces online abuse from those who believe her behaviour is not appropriate for a young Muslim woman.

"I've had a lot of disturbing comments," the rapper reveals, adding that she has been accused of being a prostitute and had her faith questioned. "'Is she a Muslim? How much per night? Why is she showing so much skin?'"

While Malaysia is a relatively affluent country, society remains largely conservative, with critics saying women's rights are not sufficiently protected and harassment is common. SYA says she is facing down the "patriarchal mindset" and "sexualisation" of those who don't conform to the cliched expectations of Muslim women. 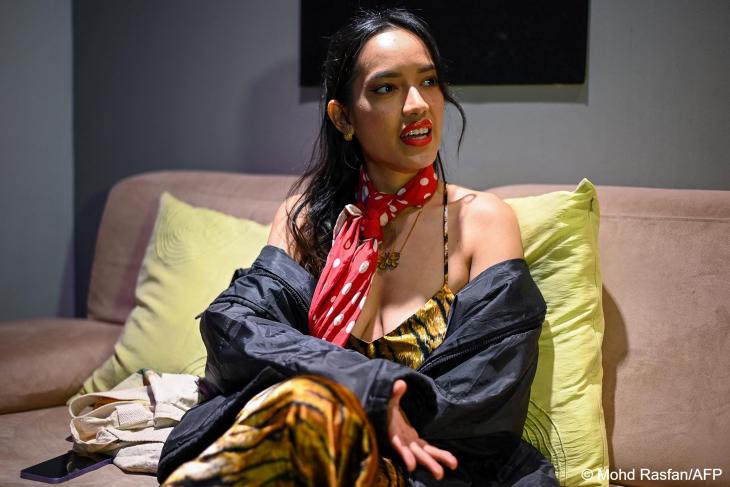 Taking a sledgehammer to Muslim stereotypes about women: "I just want women to feel more comfortable in their own skin," says SYA, whose long dark hair is uncovered. "I don't have to pretend to be somebody else just to fit what society deems is good"

Most members of Malaysia's ethnic Malay Muslim community follow a moderate form of the religion and while the majority of women wear a headscarf, there is no law requiring it. But conservative Islam has been gaining ground, pushed by hardline politicians and preachers, accompanied by growing criticism of any activities and behaviour seen as undermining the faith.

"What does (religion) have to do with me as an artist, and what I create?" she said.

The artist, who spent much of her childhood overseas, burst onto the music scene almost by accident when she posted some of her work online, drawing the attention of well-known local rapper SonaOne. He connected her with Def Jam, which had started a push into Southeast Asia, seeking to capitalise on a new wave of regional stars and a youthful demographic with increasing disposable income.

"First and foremost, I consider myself a writer... writing was the reason I am doing all of this... I had never planned to be an artist," says SYA.

The star confesses she was plagued by "self-doubt" and taken aback by her success.

She recalls: "Impostor syndrome really hit me hard. There are other people out there, especially independent artists, who make music 24/7 and are still struggling to get signed."

"Be your own person"

Growing up, SYA took part in talent shows and listened to artists such as Britney Spears and Michael Jackson. She later drifted towards hip hop as it was "such an outspoken type of genre".

Her parents are "getting used to the idea" of her becoming a star, she said, adding that her mum was her "biggest supporter". After months of only doing online shows due to a lengthy coronavirus shutdown in Malaysia, she now plans to return to live performing.

SYA has yet to run into trouble with authorities, but artists regularly do in Malaysia. Rapper Namewee, from the country's ethnic Chinese minority, relocated to Taiwan after controversy over videos he made that critics allege insult Islam. Despite this, SYA still thinks male artists have far more freedom to rap about sensitive subjects in the conservative country without fear of being criticised.

"For the boys, there are no limitations. If they want to rap about sex or weed, it is a pass," she said. "But for women, if you are Malay, you don't want to insinuate you are doing all of those things."

SYA hopes her music inspires other women – not to emulate her, but to be more confident in themselves.

Home
Print
Newsletter
More on this topic
Interview with Malaysian artist Nadiah Bamadhaj: Freeing the body from conservatism"Sisters in Islam" in Malaysia: Women working for reformIslam and politics in Malaysia: Islamist genie is out of the bottle
Related Topics
Human rights, Islam in Southeast Asia, Muslim women, Performing arts, Sexism and violence against women, Women in the Islamic world
All Topics 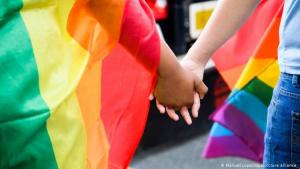 A Malaysian government taskforce has proposed amendments to sharia law that would allow action to be taken against social media users for insulting Islam and "promoting the LGBT ... END_OF_DOCUMENT_TOKEN_TO_BE_REPLACED

Lacking support from Arab countries for its stance on the Kashmir dispute, Pakistan is looking for new alliances under China's leadership. How practical is it for Islamabad to ... END_OF_DOCUMENT_TOKEN_TO_BE_REPLACED

According to the latest Reuters tally, more than 2.54 million people are now reported to have been infected by the novel coronavirus globally and 177,004 have died. As Muslims ... END_OF_DOCUMENT_TOKEN_TO_BE_REPLACED

Around the Islamic world, lockdowns and curfews are being extended and religious ceremonies are being cancelled outright in the hope of slowing the spread of COVID-19. Here’s the ... END_OF_DOCUMENT_TOKEN_TO_BE_REPLACED

Why are predominantly Muslim countries lagging behind when it comes to democracy and human rights? Dutch sociologist Ruud Koopmans uses a lot of figures to underpin his theory ... END_OF_DOCUMENT_TOKEN_TO_BE_REPLACED

How to talk about spiritual matters in a highly secularised, hyper-pragmatic society? This was the question artists exhibiting at the Stamford Art Centre in Singapore grappled ... END_OF_DOCUMENT_TOKEN_TO_BE_REPLACED
Date:
Mail:
Send via mail

END_OF_DOCUMENT_TOKEN_TO_BE_REPLACED
Social media
and networks
Subscribe to our
newsletter