In 1970, when Sultan Qaboos came to power, Oman had only two schools, not one of them for girls. Today, the country's public university protects itself from the female onslaught with a men's quota. Charlotte Wiedemann reports

If admission to Sultan Qaboos University were based on achievement alone, then female students would have become a majority

​​The sound of hushed chatting drifts through the men's reading room at Sultan Qaboos University. Most students are sitting in groups, some are reading the newspaper. Not far down the hall is the reading room for women: disciplined silence; heads are buried between stacks of books.

A small difference exists, and even other Islamic countries are aware of it: girls are education-oriented, hardworking, ambitious, and leave schools with better grades on average than the boys do. In Oman this trend is so strong that the only public university in the country protects itself from the female onslaught with a men's quota.

The front rows are left to the men

Those who enter the classroom building on the spacious campus near the capital city of Muscat might think at first that there are no women at all at Sultan Qaboos University. The ground floor below the concrete arcades is the men's corridor. Each lecture hall has two entrances: the men enter from below, the women enter from their corridor, from the upper floor. Female students also show reserve in the seating arrangement. As a rule, they leave the front rows to the men.

If admission to the university were based on achievement alone, then female students would long have become a majority. A polished procedure ensures that the gender ration of the 13,000 students is almost perfectly divided into 50/50. Every semester each faculty decides how many new admissions it can handle. Based on these numbers, the university council sets the numerus clauses, the minimum school grades for each subject.

The Sultanate of Oman promotes women. Among the Gulf states it is seen as a pace setter for female participation. But at the same time this oldest country on the Arab peninsula sets a high value on not allowing modernization to obliterate traditional morals. The gender order at the university is the best example of this difficult balancing act. Visually, men remain the predominant sex. To the question of whether the women feel discriminated against by the seating arrangement, a female student replied: "But the teachers always talk to the back of the room. They speak directly to us!"

In a regional comparison, women in Oman are indeed in a good position. According to official data, they have a third of the positions in the public sector and occupy twelve percent of government leadership positions. There are four female ministers and two female ambassadors; a few women also sit in the steering committee of the chamber of commerce as well as in the State Council, whose members are appointed by decree. For the advisory council (Majlis ash-Shura) they have active and passive voting rights, although at present there are only two women among the eighty-three delegates. This relation might improve itself soon, as new elections are being held this year. 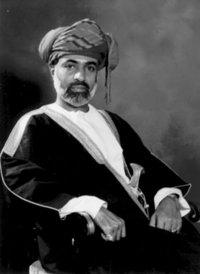 In 1970, when Sultan Qaboos came to power, Oman had only two schools, not one of them for girls

​​Due to their better education women are in demand in modern professions in the service sector. Men, on the other hand, profit from government program of Omanization that is supposed to gradually reduce the number of foreign workers in the labor force. Taxi drivers and fishermen, for instance, must be Omanis – neither of which are favored women's professions. Nevertheless, men and women compete for positions. The quota at Sultan Qaboos University attests to this.

The public university is considered to be the springboard for careers in administration. A portion of female graduates, some with brilliant exams, withdraw and devote themselves solely to the role of housewife and mother. The Omani society is very family-oriented. That Sultan Qaboos bin Said, the omnipresent regent, granted women the right to gainful employment, has removed many provisos, but the family still has the last word.

Yet this cannot change the fact that young girls throughout the country confidently say: "We are better." The sentence is uttered so often, as if it expresses the corporate identity of female youth.

What a triumph of girls' education! In 1970, when Sultan Qaboos came to power, Oman had only two schools, not one of them for girls. Today on the Jebel Akhdar Plateau, formerly an isolated mountainous region, one can visit a girls' school, where a sixth-grade class sits in front of phalanx of computers – and in response to the question of who wants to study at the university, every hand shoots up.

Still, nobody knows where all this is heading. Female indulgence still holds together the cracks in the framework of the gender order. A female lawyer from a conservative family milieu, who fought hard to work to the top, describes the relationship to her husband like this: "He is just a small candle in the army. But I treat him like a king. If I gave him the feeling that he were inferior, our life together would be destroyed."

Women in the Gulf
Exploited and Patronized
States in the Gulf like Bahrain, Oman, Qatar, Saudi-Arabia, and the United Arab Emirates are nowhere near achieving the implementation of equal rights for women in society. Foreign female workers in particular are almost treated like slaves. Petra Tabeling reports

Charlotte Wiedemann - Ghazala Irfan
Across Continents
During her last visit to Pakistan, Berlin-based author and journalist Charlotte Wiedemann met Ghazala Irfan, Associate Professor at Lahore University of Management Science. In their dialogue, they discuss the role of women in the Pakistani society and the clash of globalization and traditional society

END_OF_DOCUMENT_TOKEN_TO_BE_REPLACED
Social media
and networks
Subscribe to our
newsletter