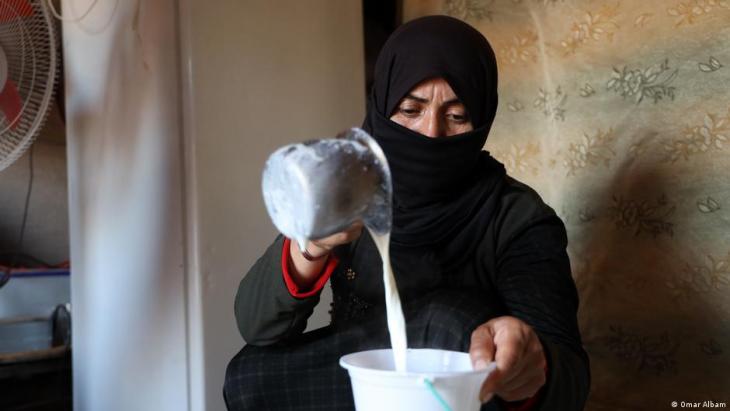 As a consequence of the 11-year war, twice as many women are now in paid jobs in Syria as before. Their employment is driven by courage and the need to feed their families. By Jennifer Holleis and Omar Albam

About six weeks ago, Moufida Rahmon started seeing her neighbourhood with different eyes. Ever since the 38-year-old opened her own small dairy business at the refugee camp Maarat Misrin, just north of Idlib, her neighbours have become her customers.

"I was able to make $40 during the first month, which was enough to feed my sons and me," said the mother of two. Her eyes speak volumes. "It's the first time that I feel hope for a better life after everything that happened in the past years," she said.

On 29 August 2012, just over a year into the war, Rahmon's husband became one of the many people to disappear in Syria. Initially, she decided to stay in the family's house in Al-Tah, but, after Russia entered the war on behalf of Syria's government in 2015, her place went up in flames following Russian shelling. "I lost my home, everything we owned, and we had to flee overnight when Syrian regime forces seized the town," she said.

Since then, she and her children had been living in absolute poverty in a small tent in the refugee camp Maarat Misrin. Rahmon and her family had depended on international aid for support as she had neither studied nor trained for a job. Earlier this year, the camp management approached Rahmon with an idea. "They offered me vocational training in the dairy business," she said. "Other women encouraged me and promised to buy my products," added the 38-year-old. 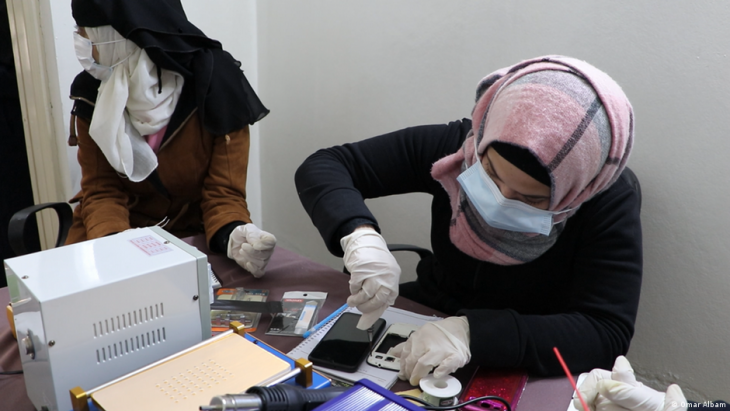 With hard work and skill: The Spark of Hope organisation is helping women in downtown Idlib to break into what was once a male domain. They learn how to repair cell phones. ""I support women at thinking out of the box," explained the energetic 48-year-old. It didn't take her long to find an instructor and enough interested women to start the course. "The women excelled in it and are very busy now," Saeed said

After a 15-day intensive course and a $800 project grant from the UN Office for the Coordination of Humanitarian Affairs, which enabled her to buy products and tools, she set up shop in her tent. So far, her neighbours have kept their word and are buying her milk products, as well as ordering milk and cheese. "I really hope that this business will expand and will enable me to change our situation for good," she said.

As a consequence of the deteriorated economic conditions, the ongoing armed conflict and the lack of male breadwinners, Rahmon is by far not the only Syrian woman to have entered the labour market for the first time.

According to this year's Syria Economic Monitor report by the World Bank, women's workforce participation doubled from 13% in 2010 to 26% in 2021. In comparison, the proportion of men increased only slightly, from 72% to 76%, over the same period.

Since 2017, the UN's Syria Cross-Border Humanitarian Fund has invested $76 million into 67 small scale businesses, vocational training and seed grants in Syria's northwest. "Fifty-one percent of the people supported by these interventions are women," said Madevi Sun-Suon, spokeswoman of the Turkish United Nations Office for the Coordination of Humanitarian Affairs.

One of these projects is the Spark of Hope organisation in downtown Idlib, which is run by Sawsan Saeed. "I support women at thinking out of the box," explained the energetic 48-year-old.

One of her most recent ideas was to train women to repair mobile phones – a business in Syria that used to be entirely in the hands of men. And yet it didn't take her long to find an instructor and enough interested women to start the course. "The women excelled in it and are very busy now," Saeed said. 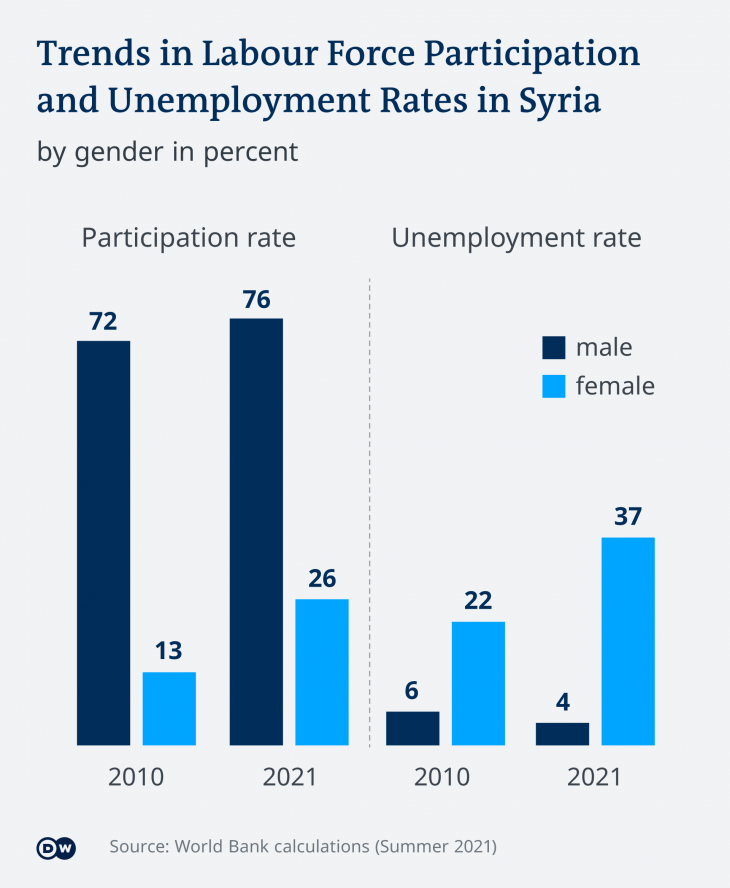 Today, twice as many women are employed in Syria as were before the conflict began in 2011, due to steadily worsening economic conditions, the ongoing armed conflict and, not least, the lack of male breadwinners. According to this year's Syria Economic Monitor report by the World Bank, women's workforce participation doubled from 13% in 2010 to 26% in 2021. In comparison, the proportion of men increased only slightly, from 72% to 76%, over the same period

Twenty-three-year-old Enas Manna applied for UN-financed vocational training as a photographer. "Since I didn't have the money to complete my studies at the University of Idlib, I felt lost for about a year," she admitted. However, following the training, she opened her own photo studio and has even employed a couple of women. "This opportunity helped me to make enough money to return to university despite the ongoing war," she said.

Over 11 years of civil war, life has become increasingly precarious in the region surrounding Idlib, formerly an agriculturally rich part of Syria. According to the UN, 2.8 million displaced people live in 1,500 refugee camps in this region, one of the last strongholds of resistance against Syrian President Bashar al-Assad and his allies.

"These civilians in and around Idlib are still resisting the Assad regime, just like the various armed groups who found shelter in this area. In turn, the social structure of this region has changed significantly," explained Anna Fleischer, head of the Beirut office of the Heinrich Boll foundation.

It is fair to say that this situation hasn't improved the lives of women either. "On the one hand, women in Idlib fear the Syrian military and the Russian forces, and on the other hand, the Islamist militias like Hayat Tahrir Sham and others are also not the biggest fans of the idea that women read, work and are financially independent," Fleischer said.

Fleischer, who previously worked for the Women Now for Development organisation also knows first-hand about many projects that continue in the Idlib region after activists are forced out of cities that have fallen back into the hands of Syria's regime. "However, in Idlib, they have to work under the radar," she said.

Any reconciliation between Turkey and Syria’s Assad regime would have disastrous consequences for many Syrians, explains Syria expert Kristin Helberg END_OF_DOCUMENT_TOKEN_TO_BE_REPLACED

There are signs of an imminent normalisation of relations between Turkey and Syria. This would allow Erdogan to score political points domestically before the upcoming elections ... END_OF_DOCUMENT_TOKEN_TO_BE_REPLACED

As Syrian camps housing families of Islamic State fighters get more dangerous, there are calls to bring children out, even if the mothers don't want to go. The idea of separating ... END_OF_DOCUMENT_TOKEN_TO_BE_REPLACED

Where are the measures to deal with the looming challenges facing the Arab world? In this commentary, Marwan Muasher warns that the region is in grave danger of falling behind ... END_OF_DOCUMENT_TOKEN_TO_BE_REPLACED

At the end of every year, the team at Qantara.de gives you a run-down of the ten most-read articles on the site over the past 12 months. Here is a quick overview of the stories ... END_OF_DOCUMENT_TOKEN_TO_BE_REPLACED

Social engagement is often motivated by religious factors. A new book explores the background to these community efforts and appraises how effective they are in helping to ... END_OF_DOCUMENT_TOKEN_TO_BE_REPLACED
Author:
Jennifer Holleis und Omar Olbam
Date:
Mail:
Send via mail

END_OF_DOCUMENT_TOKEN_TO_BE_REPLACED
Social media
and networks
Subscribe to our
newsletter