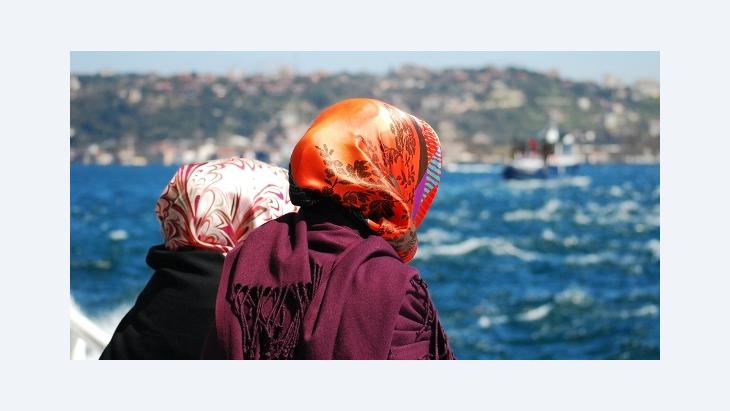 ﻿More than a third of women in Turkey have experienced sexual and physical violence at some point. An anti-violence law introduced in March was watered down by Prime Minister Erdogan. Activists fear an erosion of rights. Naomi Conrad reports

Aisha is on the run from her six brothers. If they find her, they will try to kill her. Again. Seven years ago, they cornered the then 17-year-old and each fired a bullet. She had dared to run away from a forced marriage with a man at least twice her age. To conceal her identity, Aisha is not her real name.

"We have been protecting her for seven years. But if we make even just one mistake, just a tiny one, we will lose her." Aisha's lawyer Hülya Gülbahar spreads out her hands in a gesture of despair. Losing her client is her worst fear.

"She was trying to elope with her boyfriend. They killed him," Gülbahar said.

The lawyer and women's rights activist in her 40s has seen many such cases. She says they haunt her at night: Girls secretly married off before they reach the legal age of consent at 17; a 12-year-old raped by a husband three times her age. More than a third of women in Turkey over the age of 15 have experienced physical or sexual violence at the hands of their husband or partner at some point in their lives, according to Human Rights Watch. In rural areas, the figures are even higher, almost 50 per cent.

Worse still: "At least five women in Turkey are killed every day," Gülbahar said. These murders are often called "honour killings." Girls and women are killed for bringing dishonour to their family – having a boyfriend or an extramarital affair, or even just wearing clothes deemed too immodest by their more conservative male relatives. The lawyer leans forward, setting her cup down with such force that the sweet black tea spills onto the table, narrowly missing a pile of files. "It's gendercide, like genocide, that's what it is!" 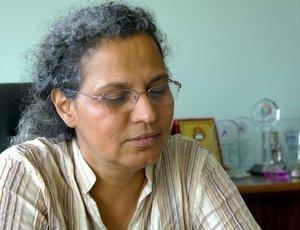 Hülya Gülbahar: "In Turkey, to be a lawyer, to fight for women's rights, means that you are risking your own life"

​​And the violence may be on the rise. "There are higher numbers of killings related to domestic violence in Turkey today," said Gauri van Gulik from Human Rights Watch. As more women in Turkey are standing up for themselves, taking up jobs and engaging with women's groups, it's leading to a backlash. "It's of course hard to prove, but I think it makes a lot of sense," she added, whilst stressing that the increase may also in part be down to more women stepping forward and reporting abuse.

In March 2012, the government introduced a new law on domestic violence. It contains important articles such as the protection of unmarried women and those whose religious marriages are not legally recognized, as well as stricter enforcement when it comes to violation of protection orders, including electronic tagging for offenders. It also calls for more shelters for abused women.

On the run for seven years

An article in the law also allows judges to grant new identities in case women are in severe danger. Gülbahar is hopeful that Aisha will receive a new ID card in the next couple of weeks. And that will mean a new life for her: For the last seven years, Aisha has been on the run, moving from one shelter to the next, never staying in any one city for very long.

"When I talk to her, I always call a different mobile number," Gülbahar said. "And I never ask which city she is living in."

Aisha is unable to find a job, to rent a flat, or even to see a doctor. That would require her to show her ID or sign an official document – sparking fears that, maybe, somehow, her brothers will find her.

"They shot a bullet through her skin", Hülya Gülbahar says, angrily pushing her greying, unruly hair back behind her ears. "Because she didn't get any treatment, she now has a tumour." That ID, she adds quietly, really is a matter of life or death for Aisha.

Original bill was watered down

"Progressive judges, who really want to make a difference and protect women from domestic violence, now finally have a tool to do so," said van Gulik from Human Rights Watch, referring to the new law. 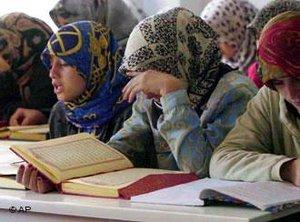 "There are higher numbers of killings related to domestic violence in Turkey today," said Gauri van Gulik from Human Rights Watch. Pictured: Young girls recite from the Koran during a female-only religious instruction course at a mosque in southeastern Batman

​​But she is only "carefully optimistic" that the law will have a major impact when it comes to protecting women in Turkey. Prime Minister Recep Tayyip Erdogan, from the conservative AK Party, has considerably watered down the original bill, drawn up in consultation with women's and human rights groups.

"The final bill that was adopted was a lot less effective than the version that was originally tabled," van Gulik said. "It was a very strong piece of legislation. And for the Prime Minister to jump in and water it down is very worrying indeed." Some references to gender equality were removed from the final draft and a paragraph calling for a dedicated police unit for women's rights was scrapped.

"I am telling you frankly: I consider abortions murder. Nobody should have the right to do this," Prime Minister Erdogan said, speaking out against abortion and Caesarean-section at a recent international conference on sexual health and reproductive rights held in Istanbul. To the participants' stunned silence, he urged women to have at least three children.

"We are a conservative democratic party and family is really very important for us. Once you lose family values, it is not easy to regain them," his Minister for Development, Cevdet Yilmaz said.

Women's rights activists were outraged – as was the political opposition. Aykan Erdemir, an opposition MP and professor of anthropology, said he is deeply concerned by the government's stance. "The recent discourse that emphasizes conservative family values threatens women's right to choice when it comes to reproductive rights."

Erdemir believes that the government is consciously turning away from the European Union and the fundamental rights and freedoms it demands, stressing more conservative and religious values as it reorientates itself towards the Islamic world.

"This is not sending the right messages to the Courts or the police," van Gulik agrees. As it is, police officers often send women back to their homes when they complain about violence or abuse. 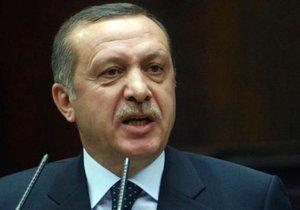 ​​"Whether judges and police officers will implement the law when it comes to unmarried women – that is a key question," van Gulik said. "The overall climate is difficult at the moment." Even now, many judges continue to give men reduced sentences, blaming their victims for "provoking" their attackers, Gülbahar said.

The lawyer's office is on a quiet side street off a bustling main road in central Istanbul. Students – mixed groups of women and men – sit in roadside cafés, couples wander in and out of expensive boutiques holding hands. Their skirts are short and stylish, long hair bouncing freely in the breeze blowing across from the Bosporus. Here, liberal Istanbul seems unperturbed by honour killings or violence.

But Hülya Gülbahar is afraid. To start the court proceedings to apply for Aisha's new ID card, she had to give her address – and it is possible that Aisha's brothers will trace her to this office.

To fight for women's rights, is to risk your own life

"Now they know where I live, of course I'm scared," Gülbahar said. She has been threatened before. Just a couple of days ago, a defendant, a high-ranking police officer who had killed his wife, pointed at her in the Court room. "He said he would shoot me."She shrugs. Once men armed with guns came to her flat threatening to kill her. But she's not going to give up. "In Turkey, to be a lawyer, to fight for women's rights, means that you are of course risking your own life."

For Gülbahar, who isn't paid for representing Aisha, the battle is personal, too. Gülbahar attended a wedding a couple of weeks ago. She recalls that a male relative sidled up to her and pulled her aside. "You're showing too much cleavage," he told her pointing at her red, sleeveless dress. "Cover up! It's not decent!" She was shocked. Her family was always liberal, she says, and readily accepted that she has been living with her partner, without any plans of ever getting married.

She is going to keep on fighting for Aisha and her other clients. "It's the government's job to protect these women, but they're not. So I'm doing my best to protect them." And, she believes, by fighting for their rights, she is also protecting herself.

Home
Print
Newsletter
More on this topic
Islam and Democracy in Turkey: A Headscarf Affair, a Women's Affair?Women in Turkey: Trapped in the Gender GapInterview with Nilüfer Göle: Shifting Identities and the Stakes of Turkish Democracy
Related Topics
Democracy and civil society, Gender, Human rights, Muslim women
All Topics

Some companies in Germany are reluctant to hire Muslims. But it is not only the Muslim applicants who are losing out, so too are the companies. After all, there are multiple ... END_OF_DOCUMENT_TOKEN_TO_BE_REPLACED

Artists and intellectuals in Turkey are coming under massive pressure. Since the attempted coup against Erdogan by parts of the military in 2016, the government has intensified ... END_OF_DOCUMENT_TOKEN_TO_BE_REPLACED

The disappearance of Razan Zeitouneh and her colleagues has been one of the greatest mysteries of the Syrian war – until today. DW's investigative unit hunted clues across six ... END_OF_DOCUMENT_TOKEN_TO_BE_REPLACED

How can the various realities of Kurdish life, shaped by depression, resistance and war, be depicted in art? This is the question addressed by the “bê welat – the unexpected ... END_OF_DOCUMENT_TOKEN_TO_BE_REPLACED

Almost all NATO troops have withdrawn from Afghanistan. Turkey is looking to fill the gap and is offering itself as a new protective power. But the Taliban are sending clear ... END_OF_DOCUMENT_TOKEN_TO_BE_REPLACED

Turkish refugees are for the most part invisible in Greece. In her film debut, the Greek journalist and filmmaker Marianna Kakaounaki portrays the fate of Turkish followers of the ... END_OF_DOCUMENT_TOKEN_TO_BE_REPLACED
Author:
Naomi Conrad
Date:
Mail:
Send via mail

END_OF_DOCUMENT_TOKEN_TO_BE_REPLACED
Social media
and networks
Subscribe to our
newsletter