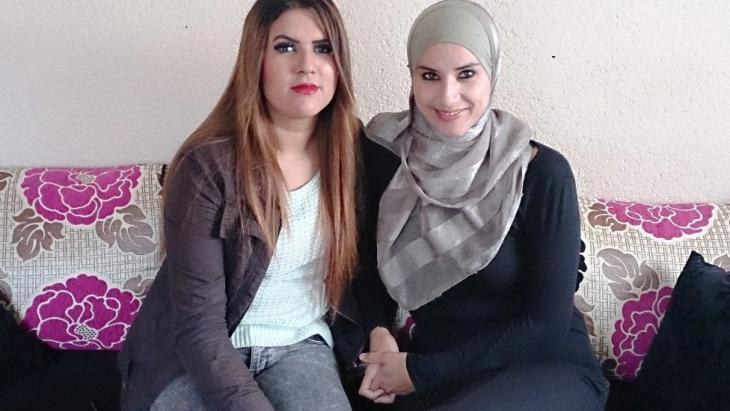 Women's dress code in Islam
No compulsion to wear the headscarf

The Becharis, a Moroccan family from Frankfurt am Main, place great emphasis on respect and tolerance, an attitude that is illustrated by the fact that mother and daughter each accept that the other has chosen a different path when it comes to the issue of the headscarf. By Canan Topcu

Rabia Bechari always covers her hair. She likes variety and therefore alternates between black and colourful headscarves. She always chooses clothes that do not cling to the contours of her body. Sometimes she wears a long dress; sometimes she prefers trousers and a tunic.

Rabia Bechari is a devout woman. She prays, fasts and is intensely focused on her religion. She attends lectures and events in which matters concerning Islam are discussed. She also reads books on Islam. As far as Rabia Bechari is concerned, practising one's faith not only means thinking about it, but also being there for others. This is why she works as a volunteer counsellor at a Frankfurt hospital.

Rabia's daughter Nadia is different. Sometimes she wears her hair curled; sometimes straight. She wears tight-fitting clothes and likes to put on flashy makeup. She uses bright red lipstick and wears contact lenses to change the colour of her eyes from dark brown to green.

The joy of provocation

Nadia likes being provocative. That is why she dresses "in a way that girls really shouldn't dress". Nadia knows from her mother that relatives and family friends don't approve of her appearance. "I don't care what people say behind my back," says the 18-year-old in a defiant tone. Rabia Bechari, on the other hand, does care. Nevertheless, she does not comment on her daughter's wardrobe; she believes that pressure is not an effective approach to upbringing.

Mother and daughter live under the same roof. In order to keep the peace, they have come to an unspoken agreement. This also entails Nadia not appearing before her mother in a miniskirt. "It is simply a matter of respect for my mother," says Nadia. When she wants to wear a miniskirt, she just takes it to a friend's house and puts it on there. 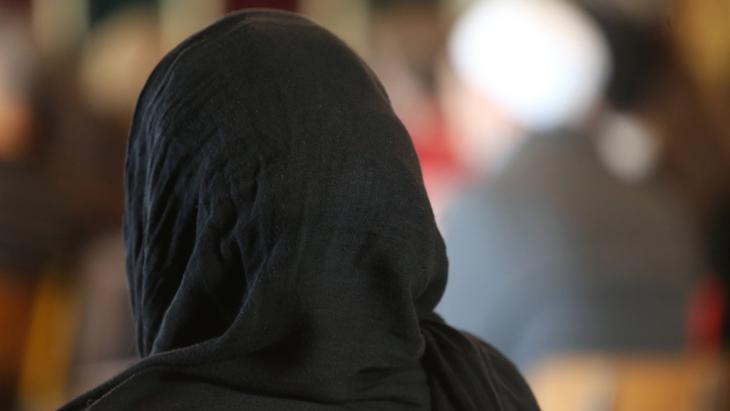 Tolerance despite differences of opinion: "In terms of their appearance, lifestyle and attitude to life, Rabia and Nadia are completely different. Despite this, mother and daughter respect each other, even though they enjoy 'a very complicated relationship'," writes Canan Topcu

In contrast to her daughter, Rabia Bechari has no desire whatsoever to be provocative. Yet despite her intentions, she inadvertently is. Strangers often approach her and ask about her appearance. The 39-year-old mother has become accustomed to inquiries about her religion. She freely enters into conversation and explains her conviction that wearing a headscarf is a religious obligation and an "act of worship".

She is aware of the various interpretations of Islam and, in particular, those concerning the Koran suras dealing with the veiling of female charms. To wear a headscarf without possessing the proper attitude is pure nonsense, says Rabia Bechari. This is why she does not pressure her daughter to wear a headscarf. "You cannot achieve the goal of living a life that is agreeable to God by exerting pressure."

In terms of their appearance, lifestyle and attitude to life, Rabia and Nadia are completely different. Despite this, mother and daughter respect each other, even though they enjoy "a very complicated relationship". Rabia Bechari says that she values her daughter's "genuine and straightforward manner".

Nadia, in turn, likes the fact that her mother is not willing to take off her headscarf despite the level of opposition it encounters in society. Nadia also finds that her mother looks "very beautiful" with her headscarf. She also likes her mother's conviction that "there is no compulsion in Islam."

Rabia Bechari wasn't always this devout. When she was a child, Rabia asked her mother about religion. Her mother was unable to explain to her the meaning of the precepts and prohibitions in Islam. "She just always told me that she wore a headscarf for religious reasons, but that she didn't know exactly what these reasons were," says Rabia Bechari, who was the second of eight children born to Moroccan parents in Frankfurt, where she grew up. 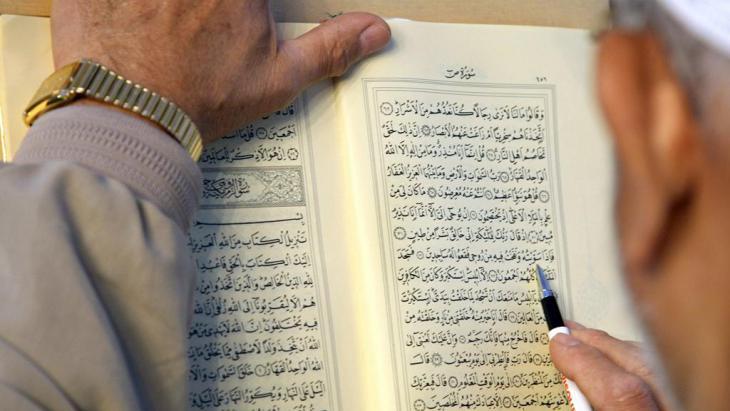 Rabia Bechari has been wearing headscarves for ten years. She says that although she is aware of the various interpretations of Islam and the Koran suras dealing with the covering of the female body, she feels that it is "pure nonsense" to wear a headscarf without the proper attitude

Choosing the headscarf after divorce

She made the decision to cover her hair around ten years ago, soon after she was divorced from her husband. At the time, she was working as a bank clerk. Her decision was a source of confusion for her colleagues and her former husband, who had failed to convince her to wear a headscarf while they were married.

Since then, Rabia has married and divorced a second time. The single mother of three now works as a childminder and lives in Dreieich near Frankfurt. In addition to her daughter, she also has two sons aged six and seventeen.

"I only became more religious over time and gradually began to learn about Islam," says Rabia Bechari. She did not want her daughter to have a religious upbringing similar to her own, only learning Koran suras by heart, so she sent Nadia to German-language religious courses, some of which were provided by the Pakistani community. "It was all really interesting," says Nadia, although she does not sound too convincing.

Headscarf inappropriate for her lifestyle

For a time, Nadia also wore a headscarf. This was because she thought it made her mother look beautiful. But she didn't only want to wear a headscarf, but make-up as well. Mother and daughter struck a deal. The girl wore a headscarf and was allowed to wear makeup too. At the time, Nadia was 13 years of age and in year 7.

Her teacher did not understand why, from one day to the next, she had begun to wear a headscarf, says Rabia. "She assumed that I had forced my daughter to wear it," adding that anyone who knows Nadia would know that she has a mind of her own and can't be forced to do anything against her will. "I really only wanted to provoke my teacher and my classmates," claims Nadia, looking back on events.

She succeeded in her goal, but it did not do her much good. From this point on, she no longer enjoyed good relations with her teacher. After a few months, when she realised that it "wasn't for her", Nadia stopped wearing the headscarf. Since then, nothing has changed. The headscarf just isn't compatible with her lifestyle, says the 18-year-old. "Maybe there will come a day when I change my mind."

Home
Print
Newsletter
More on this topic
Book review: Emel Zeynelabidin's "You grow up only in this life": The headscarf is not a gauge of devoutnessWho is hidden beneath the burqa?: An appeal to the WestQantara dossier: The headscarf controversy
Related Topics
Integration in Germany, Islam in Germany, Islamic lifestyle, Muslim women, The Headscarf Controversy
All Topics

Her grandparents are Jews – born in Tunisia and Algeria. Director Cleo Cohen has now broken the silence about this with a very personal debut. By Nadine Wojcik END_OF_DOCUMENT_TOKEN_TO_BE_REPLACED

Life imprisonment for crimes against humanity: that was the sentence handed down to Anwar Raslan in the world's first trial of a member of the Syrian torture system. Matthias von ... END_OF_DOCUMENT_TOKEN_TO_BE_REPLACED

Every year in December, the team at Qantara.de takes a look back at the articles that proved most popular with our readers. This year is no different. Here is a run-down of the ... END_OF_DOCUMENT_TOKEN_TO_BE_REPLACED

With his new album, "A Voice Keeps Calling Me", the Persian santur player Kioomars Musayyebi is building bridges from Iran across the Arab world to European early music. By Stefan ... END_OF_DOCUMENT_TOKEN_TO_BE_REPLACED

Former lawyer Said Haider has invented a chatbot for those seeking advice on anti-discrimination issues – Meta is the first chatbot of its kind in the world. In conversation with ... END_OF_DOCUMENT_TOKEN_TO_BE_REPLACED

Benjamin Idriz, imam of the mosque in Penzberg near Munich, is one of the most prominent representatives of Islam in Germany. He sees his role as building bridges to mainstream ... END_OF_DOCUMENT_TOKEN_TO_BE_REPLACED
Author:
Canan Topçu
Date:
Mail:
Send via mail

END_OF_DOCUMENT_TOKEN_TO_BE_REPLACED
Social media
and networks
Subscribe to our
newsletter