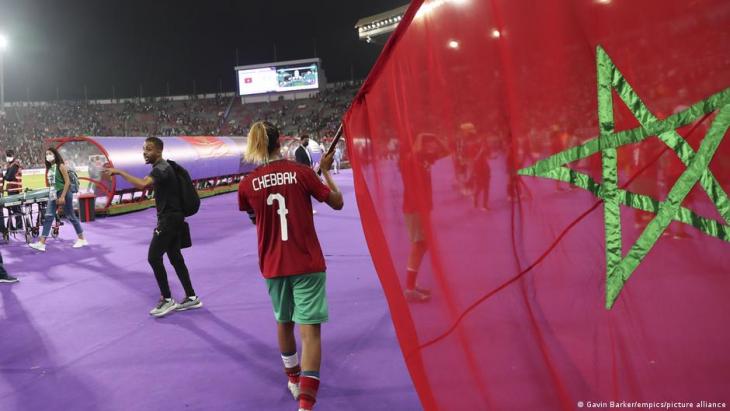 The Women's Africa Cup this year in Morocco was a resounding success. The Moroccan team was the first Arab women's football team to qualify for a World Cup. By John Duerden

Recently, there has been an upturn in interest in women's football around the world. Euro 2022 was a resounding success: sporting, in media terms, not to mention the spectator numbers in English stadiums. The Women's Africa Cup of Nations, which took place in Morocco at the same time as the European Championship in England, also attracted record audiences. The Moroccan hosts gave a stunning sporting performance and reached the final – to the delight of their fans.

So far, no Arab nation has ever managed to make an impact on the international stage. However, this could be about to change with Morocco set to become the first Arab country to appear at the Women's World Cup – in Australia and New Zealand next July and August.

"This is just the beginning for women's football here," said the Atlas Lionesses' star striker Ghizlane Chebbak shortly after Morocco qualified by clinching a place in the last four at this summer's Women's Africa Cup of Nations (WAFCON). "We have come a long way but there is still a long way to go." 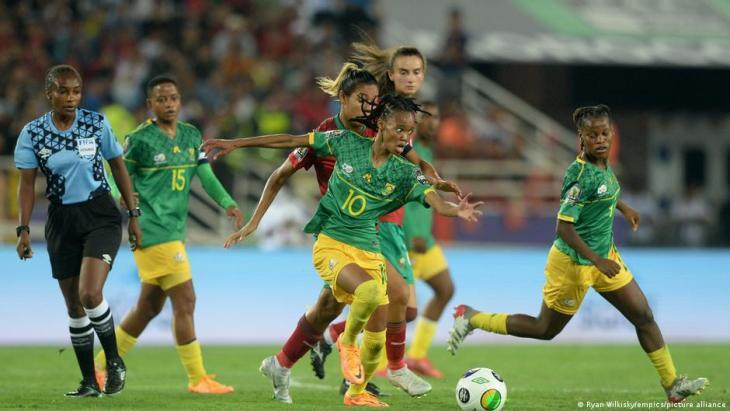 Defeat in the final: the South Africans won 2-1 against Morocco in the Africa Cup final. Nevertheless it was a breakthrough for a nation in a region that has been playing catch up due to the historical reluctance of national football associations and governments to get behind the women's game. "It has to do with the Arab world's sociocultural context, and the acceptable norms within whose confines women are supposed to function," said Susan Shalabi, vice-president of the Palestine Football Association

It was a breakthrough for a nation in a region that has been playing catch up due to the historical reluctance of national football associations and governments to get behind the women's game. "It has to do with the Arab world's sociocultural context, and the acceptable norms within whose confines women are supposed to function," said Susan Shalabi, vice-president of the Palestine Football Association.

"Football has always been viewed until very recently as a rough, masculine sport. Girls were not encouraged to play football," added Shalabi, who is one of the few women in the Arab world who holds a senior executive position in the game.

While Chebbak, whose father Larbi was a celebrated Moroccan international, grew up with a ready-made pathway into the game, others, like her less-famous compatriot, Rania Harrara, face a much rockier road. Determined to play the game even though her school didn't have a girl's programme, Harrara forced her way onto the boys' team.

"Persevering through misogynistic slurs and fighting for my position on my school's soccer team is one of my proudest and most valued achievements," she said. "While I won and deserved my spot, the slurs never stopped."

Harrara, now 18, is working to make it easier for girls in her hometown to get started in football. In 2016, she set up the Association de Football Feminin Casablancais, an organisation that gives young Moroccan females the chance to play the game they love.

Even for those with talent, there has long been few opportunities to forge a career as many football federations were slow to invest time and money into the women's game. "A lack of support from their federations means inactivity in the domestic leagues," explained Agnes Amondi, a writer with Her Football Hub and Africa New Media Group.

Even when there have been signs of success, there were no foundations to build upon. "In 2016, Egypt qualified for WAFCON for the first time since 1998 but after they were knocked out, everything came to a standstill, and they were then even unranked by FIFA.”

50,000 spectators and a message from the King

In July, though, Morocco showed the region what could be, when it hosted WAFCON. In preparation for the tournament, the national FA invested in facilities and the domestic league. The result was special. In 13 previous tournaments, no Arab team had ever reached the knockout stage, but Morocco stormed into the final, defeating 11-time winners Nigeria along the way.  Even though the Atlas Lionesses fell to South Africa in the final, it was clear that something had changed. 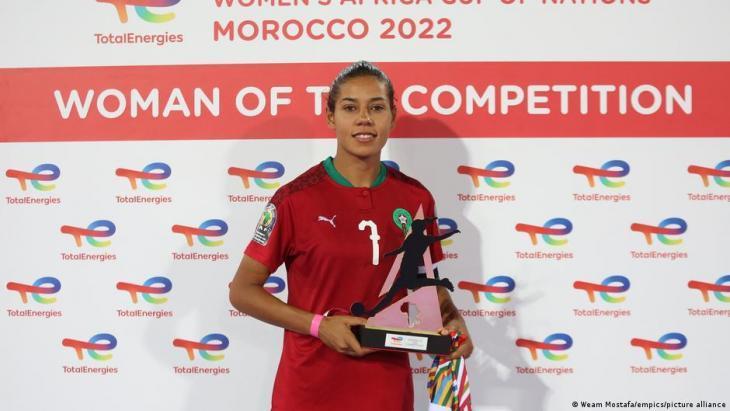 Morocco's star striker Ghizlane Chebbak was named "Best Player of the Tournament" at the Africa Cup. She played a major role in helping the Moroccan team reach the semi-finals of the Africa Cup, which also helped them qualify for the World Cup. "This is just the beginning for women's football here," Chebbak said shortly after the crucial match. "We have come a long way, but there is still a long way to go"

More than 45,000 packed the stadium for Morocco's semi-final win over Nigeria, and over 50,000 turned out to the final. For the first time ever, the women's game had become the biggest story in Morocco, and the team even received a message of congratulations from King Mohamed VI.

"I experienced things that I had never experienced before; a stadium full of fans and football lovers," said Chebbak, who was named the Player of the Tournament. "I am living a dream."

Morocco's success did not go unnoticed around the Arab world.  "It was a sight for sore eyes," said Shalabi, the Palestinian football executive.

"It is heart-warming to see this enthusiasm and support for a women's match. It just needs to succeed in one Arab country, and the rest will want to copy and improve. This will help create a friendly environment for women's football."

Amondi too hopes that other nations take a page out of Morocco's book. "For Egypt, Tunisia and Algeria then Morocco is a template. If they want their women's teams to do well, investment, commitment and proper planning is needed." 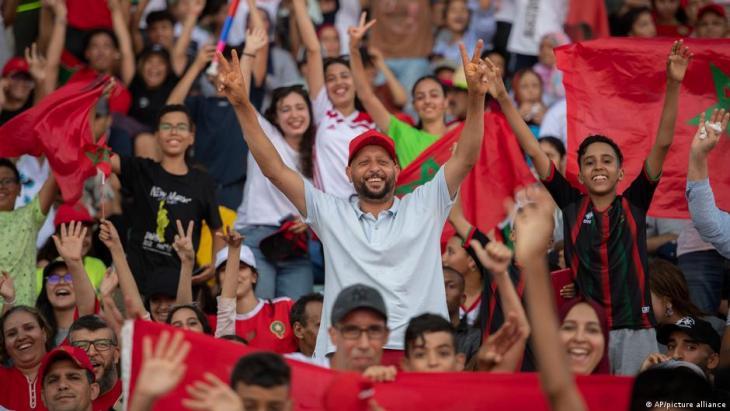 Enthusiasm for women's football: 50,000 spectators watched the final between South Africa and Morocco at the Prince Moulay Abdellah Stadium in Rabat. For the first time ever, the women's game had become the biggest story in Morocco. Ghizlane Chebbak and her teammates even received a congratulatory message from Morocco's King Mohamed VI. "I experienced things that I had never experienced before; a stadium full of fans and football lovers," said Chebbak, who was named the Player of the Tournament. "I am living a dream"

There are signs that this may be starting to happen. This year, Saudi Arabia, one of the more conservative countries in the region, launched a national league, with the national team playing their first international games. In August, the federation announced its intention to bid for hosting rights for the 2026 Women's Asian Cup, something that would have been unthinkable just a few years earlier.

"We have huge ambitions for the development of the women's game in Saudi Arabia, and the recent progress has been incredible," said Lamia bin Bahian, Board Member of the Saudi Arabian Football Federation. "We really are entering a new and exciting era for women's football."

Morocco's journey is not over yet, having already secured the rights to host WAFCON 2024. More importantly though, next summer the Atlas Lionesses will represent the Arab world on the biggest stage, competing against the powerhouses from Europe and North and South America.

"The World Cup is the biggest stage," Amondi, the African football writer said. "What more can you ask for really? It's an opportunity to see how far they've come and what they have to do to match the world's best. Can it be a game changer? In the long run, yes…but there's no short cut."

Home
Print
Newsletter
More on this topic
Muslim sportswomen on the rise: An inspiration to young women around the worldBerlinale 2019: Marwa Zein's "Khartoum Offside": Football, film and freedom in SudanMigration in Germany: Football can contribute to integration
Related Topics
Arab world, Football, Gender, Muslim women, Sport, Women in the Islamic world
All Topics

Tunisia's economic and political instability and the increasing reluctance of Europe to take in job-seeking migrants is leading many Tunisians to head for sub-Saharan Africa in ... END_OF_DOCUMENT_TOKEN_TO_BE_REPLACED

Charting his own descent into extremism, former Moroccan jihadist Adil El Hasani reveals how he was ultimately able to extricate himself from the grasp of those peddling religious ... END_OF_DOCUMENT_TOKEN_TO_BE_REPLACED

The history of Jews and Muslims is far more entangled than you might imagine – but you have to listen out for it. In "Recording History", Christopher Silver takes us on a sonic ... END_OF_DOCUMENT_TOKEN_TO_BE_REPLACED

Welcome to the world of Al Qasar, where Arabic music collides head-on with punk and psychedelic to create something powerful and beautiful. "Who Are We" is a raucous, subversive ... END_OF_DOCUMENT_TOKEN_TO_BE_REPLACED

A conflict rooted in identity is currently gaining traction in Morocco. It began with demands to relieve the "burden" of Fusha (classical Arabic) by implementing a linguistic ' ... END_OF_DOCUMENT_TOKEN_TO_BE_REPLACED

The southern shores of the Mediterranean Sea are losing sand faster than almost anywhere else. The ecological and economic damage is immense. The good news is, there are ways to ... END_OF_DOCUMENT_TOKEN_TO_BE_REPLACED
Author:
John Duerden
Date:
Mail:
Send via mail

END_OF_DOCUMENT_TOKEN_TO_BE_REPLACED
Social media
and networks
Subscribe to our
newsletter