By the mid-20th century, Bahraini women had come a long way in terms of social development, and they were immersed in particularly influential roles, including in the media and press, which were influenced by the Arab media at large.

The book "Bahraini women in the 20th century" by Sabika Al Najjar and Fawzeya Matar records that in the 1950s, Bahrain awoke to the Arab feminist movement in Egypt and the Levant, and to the writings of the leading intellectuals of the time, such as Rifa'a al-Tahtawi and Qasim Amin, as well as to pioneering feminists like Huda Sha'arawi, May Ziade and others, who played a role in the movement.

In this way, the feminist community in Bahrain interacted with the movement abroad, as was reported at the time in the weekly al-Qafila: "the trip of three young ladies abroad during their summer holidays was to learn how collectives and cultural establishments are organised, in order to start similar ventures in Bahrain."

The media was known at the time for its feistiness, and it did much to portray women as individuals with views to be reckoned with. For the first time, the door was opened to daring articles by women who tackled issues about marriage and the family. The writings addressed women’s status and the way society viewed them. They also criticised traditions and the use of religion as a pretext by religious leaders to repress women.

You may also like: The uprising of women in the Arab world – Fighting patriarchal tyranny

During the same period, two sisters, Badria and Shahla Khalfan came to the fore, alongside Moza Al-Zayed, as leading examples of women writers who interacted with and influenced people, not only in Bahrain, but in other Gulf states where the newspapers which published their writings were distributed.

The 1950s women’s movement coincided with the nationalist movement, and women tried to keep pace with the latter, albeit with leaden feet, always looking for a way to cut the shackles of tradition and society. In the schools, the first seeds of organised women’s action sprouted with the help of visiting female Arab teachers, and the "Orphans Association" was established in the first school for girls.

Founded in 1953 by women of well-to-do and educated backgrounds, the "Bahrain Ladies’ Club" was the first women’s collective. But the fact that the Club was headed by the wife of Sir Charles Belgrave, an adviser to the ruling family, was seen as a symbol of colonialism, and therefore many nationalist leaders felt aggrieved.

The nationalists led a staunch media campaign against the Club, and they called for the establishment of an association akin to those already present in Egypt and the Arab Levant. Thus, the "Bahrain Young Ladies Association" was born in 1955, using the same title that had been given to their Arab sister associations. This name would later be adopted by other women’s groupings across the Gulf.

The "Children and Mothers Welfare Society" was established in 1960 by female members of the ruling family and others from affluent society. Both it and the "Bahrain Young Ladies Association" focused on charity work, literacy and childcare. This continued up until the 1970s, when the modus operandi of the "Bahrain Young Ladies Association" changed upon the return of many university graduates from Cairo, Kuwait and Beirut with a new sense of nationalistic zeal and heightened expectations.

In 1970, "AWAL Women’s Society" was founded by members of the middle class, most of whom were working women who had studied abroad and who had joined student unions and political movements there. These women actively embraced the demands of a feminist legislative agenda.

Also in 1970, the "Riffa Women Cultural & Charity Society" was established by working women, mostly teachers. In its infancy, RWCCS was somewhat akin to "AWAL", but later it focussed on charitable and pastoral work, especially after the dissolution of the Bahraini National Assembly and the subsequent enactment of the 1974 State Security Law, whereby campaigning for women’s rights came to be seen as purely a political act.

Also in 1974, the International Women’s Association was formed by women from the leading merchant class as well as diplomats’ wives.

Today, there are some 21 women’s associations in Bahrain, most of which were established at the beginning of the millennium. This period is commonly referred to as one of political enlightenment and increased freedom.

In recent years, Tehran had pushed a clever public-relations campaign to depict Soleimani as a Napoleon- or Caesar-like warrior-poet. He was even mooted as a likely presidential ... END_OF_DOCUMENT_TOKEN_TO_BE_REPLACED

Taking the Fridays for Future movement as his starting point, Muslim environmental expert Tarik Quadir talks to Marian Brehmer about the connections between Islam and ... END_OF_DOCUMENT_TOKEN_TO_BE_REPLACED

Equality in divorce, a ban on polygamy: reformers of Islamic family law have a clear agenda. They are exploiting the ambiguity of traditional jurisprudence. By Joseph Croitoru END_OF_DOCUMENT_TOKEN_TO_BE_REPLACED

Yazz Ahmed is one of the most exciting personalities on the lively London jazz scene. Her complex musical suites combine the traditions of her Bahraini roots and jazz ... END_OF_DOCUMENT_TOKEN_TO_BE_REPLACED

The collapse of traditional multilateralism in the Arab world has been accompanied by a significant shift in American Middle East policy under President Donald Trump, writes ... END_OF_DOCUMENT_TOKEN_TO_BE_REPLACED 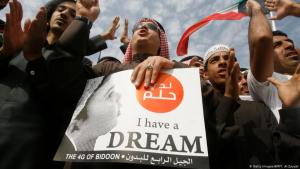 For more than 50 years, the Bedoons have been living in Kuwait without citizenship status. Now, it seems this problematic situation is finally being addressed. There may be light ... END_OF_DOCUMENT_TOKEN_TO_BE_REPLACED
Author:
Hana Bu Hejji
Date:
Mail:
Send via mail